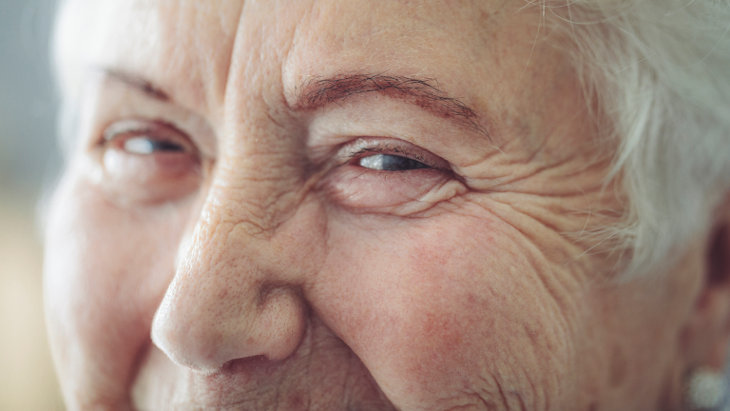 Before the Star of David there was a Star of Sylvia.

We at Jewlarious just got word of a miraculous find 15 miles from the Negev: Archeologists just found a 3000-year-old bubbe in the Negev. And her name is Sylvia. Sylvia! During a routine dig, archeologists found the woman who claimed she was 3000 years old. Actually, she said she’ll be 3000 and ½ – in October. As the best in Jewish news, we ran over and expressed what a privilege it would be if we were the first to interview her, and she agreed! So now I am over the moon to share with you part of my conversation with THE 3000-YEAR-OLD JEWISH BUBBE! (OK, so I’m rounding off a little.) With love and gratitude to Reiner and Brooks!

MARNIE: Sylvia, why did you hide from the public all these years?

SYLVIA: I was never a people person. I lived in what is now the Middle East. Where? I never knew. It was the Dark Ages. Who could see? So when I turned 500, the whole city-state turned out with a cake with 500 candles plus one to grow on. Then they chanted, “blow and make a wish to see the light!” Not only was I temporarily blinded, I almost lost a lung with all the blowing. Then there were the crowds, the noise, the spitting on me when they talked? My wish was to get the heck out of there. For a while I hid in a cave, lovely. When I stepped outside, I had such a view of the Dead Sea. With no spitting. I stayed there for years. But how many times can a person read:

without going meshugge? And from then on, I kept a low profile.

MARNIE: Over the years you’ve seen so many marvelous inventions, tell the world what in your opinion was the greatest invention?

SYLVIA: Many. At least 100. But the first? No Question! Deodorant! I’ll never forget my first hut. Mama, papa, me – and 98 other people running around wearing fur in 110 degrees. By the age of three, I had PTSD from the shtink alone. So I toddled out for a breath of fresh air. But it turned out, the shtink traveled. In Kinderhut I learned that 250,000 cubits was the record – even the parts without people. We also studied philosophy. The big question was: If a shtink is somewhere in the desert, and no one’s there to smell it, does it still shtink anyway? Oh boy! You bet! When our hut reached 300 and we were plotzing right and left, it took Chaim the Kohen to say, “Maybe we should build two huts.” Two huts! The man was gifted!

MARNIE: So, you were born Jewish.

SYLVIA: Who wasn’t back then?

MARNIE: I noticed your Star of David.

SYLVIA: Forget David! It should be The Star of Sylvia! Forgive me, but no one knows. Which is the unfortunate story of my life. Even as a child, I’d get up, pile my rocks perfectly. Did mama give me any credit? Not a word. But my brother? If he put two pebbles in a row, he was a prince. But that Star? Me. Not that I want praise but a little wouldn’t hurt.

MARNIE: Are you saying that you, Sylvia, invented The Star of David?! How?

SYLVIA: Way back women got rotten gifts – a bundle of sticks, a sandcastle, a brown tooth. A shovel was a big deal. So one day when I was digging with my birthday shovel, up came a rock that was yellow and soft like butter. While I was thinking what to do, I bent it into a lot of shapes. I made circles, squares, on occasion, a dodecahedron. Then I hit triangles. What a pastime! You could say I also invented “the hobby.” Anyway, I showed my triangle to the ladies in my village. They loved them! At the time I was married to my 76th husband, David. He hated it.

SYLVIA: One triangle? He kept saying, “Syl … who the heck will buy one?! You have to say ‘And for only 19 1/2 raisins, we’ll double your order! Yes, you’ll get TWO, TWO for the price of ONE.’” Such fighting over that one triangle! “David,” I said. “Who needs TWO triangles?!” Five years we yelled at each other. Finally we saw the rebbe. He said: “The Lord decreeth that maneth and wifeth shall be equalith. So you Sylvia, keep your one triangle and David, you make another but put it upside down on top of hers.” Boom! Two triangles in one. My husband called it The Star of David! Without a Sylvia. I can still hear his hocking: “You think ‘The Star of S & D’ will go over? Filth it is, filth! Feh!”

MARNIE: In those days, what games did you play?

SYLVIA: Well, “LOOKIE LOOKIE” was number one. We’d lie on the grass, point and say “Lookie, lookie at … that.” Nothing had names. It was very popular because face it … we were busy?

MARNIE: So…interesting. You know, I think I’ve taken up enough of your day.

SYLVIA: I’ve got lots of them. Days I mean. Come again tomorrow. Bring food. Gefilte fish. Not the little balls, the big boat ones. And not sweet. I need diabetes at my age? Make sure there’s a carrot on top. Make it three.

Stranger than Fiction
In the Shadow of David and Goliath
Where Do the Laws of Nature Come From?
Saadiah Gaon, Rashi and Maimonides: How Three Rabbis Revolutionized Judaism
Comments