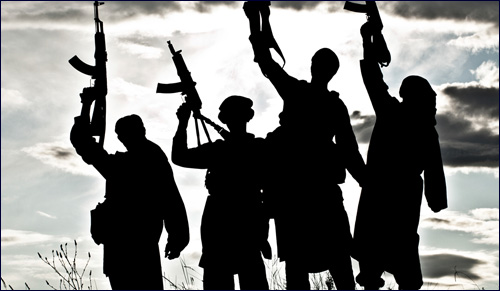 Reputable organizations lend support, prestige and funds to those who plan, carry out and praise terror attacks against Jews.

Would you knowingly support terror? That's what many of us in the West are doing – whether we realize it or not – as some of organizations we trust lend support, prestige and funds to those who plan, carry out and praise terror attacks against Jews.

Some of the most beautiful cities in the world – including Florence, Dublin and Naples – call Nablus a "twin" city. One partnered city, Dundee in Scotland, praises its partnership with Nablus on an official website, explaining: "We exist to encourage friendship and understanding between the people of Nablus and the people of Dundee."

That "understanding" seemed to overlook recent celebrations in Nablus, reveling in the October 1, 2015 murder of Rabbi Eitan and Naama Henkin, who were shot in their car near Nablus, as their four children in the back seat watched. (Five men who carried out the attack were later arrested in Nablus.) The night of the murder, Nablus was filled with revelry, as residents set off fireworks and waved flags.

Not one of the many international cities that are twinned with Nablus severed links with their partner of these obscene celebrations, though one local politician – in Stavanger, Norway – has recently called for his city to end their partnership agreement with Nablus over another glorification of murder by the city. Upon learning that the city of Nablus had named a square after terrorist Naif Abu Shawah, who helped plan a string of suicide bombings in Israel, including one in 2003 that killed 23 people, Stavanger city councilman Mats Danielson complained that his city was lending prestige to those who support terror: "(T)he friendship between the cities could reflect our shared values, norms and customs. This is proof to the contrary. Our twin city, Nablus, is praising terrorists," he told the newspaper Rogalands Avis. Where are the other voices of protest?

The Fatah party that dominates the Palestinian Authority ordered the attack on the Henkins. Mahmoud al-Aloul, chairman of Fatah's armed wing, and a former mayor of Nablus, confirmed that his forces carried out the "operation" as he termed the murder: "With Allah's help and in keeping with our right for resistance and our duty to sacred jihad our forces on Thursday night carried out a necessary action in which they fired on a car of occupying settlers...they fired on the car and killed the settler and his partner".

Aloul has a long history of condoning and inciting violence. In 2014, he called for a Third Intifada in Jerusalem, encouraging young men to "rise up" and attack Jews in the city. This propensity to violence didn't prevent the BBC from quoting him in a Dec. 10, 2014 news article, calling him a "Leading Palestinian Activist", and not mentioning his bloodthirsty calls for terror attacks.

After a terrorist attacked a Jewish family in Jerusalem's Old City on October 3, 2015, stabbing the father Aharon Benitah to death and wounding his wife Odel and two year old son – and then killing a second Jew, Rabbi Nehemia Lavi, when he tried to intervene – the Palestinian Authority sent out a news story about the event on its October 6, 2015 official news feed: a baby had already been named after the terrorist, whom the Palestinian Authority praised as a hero, and "(t)he mother of the baby cried from joy at the birth of her baby, who eternalized the name of the hero among the heroes of our eternal people, and the second mother (of the terrorist) cried from joy at the birth of the baby that will eternalize the name of her son the Martyr."

Palestinian Authority officials – including President Mahmoud Abbas, who earlier in the year stood shoulder to shoulder with world leaders as he marched in Paris protesting terror attacks in that city – failed to condemn – or even comment on – their news organization's dissemination of the story.

Who funds the groups that have claimed responsibility for terror attacks that killed Israeli Jews? The Palestinian Authority's funding isn't always easy to track. A 2013 report by the European Court of Auditors found billions of dollars in aid money was missing, due to corruption, money laundering and outright theft. But the Court did note that the European Union is a big funder. Between 2008 and 2012, European sources transferred approximately $3.1 billion to Palestinian organizations. That's in addition to $500 million in annual aid from the United States, and a pledge of over $5 billion promised by an international consortium in October 2014.

The Palestinian Authority's "Law of the Prisoner" mandates that these terrorist salaries are paid first – before any other budget priorities, even during tight fiscal times. Those convicted of terrorist offences are paid on a sliding scale, with those guilty of the most serious crimes paid the most. Those sentenced to prison stints of up to three years for terror offences collect about $400 a month, while those serving 15-20 years are paid nearly $2,000 each month. At times, Palestinian President Mahmoud Abbas gives bonuses, awarding extra money to mark Muslim holidays such as Eid.

Outside of official funding channels, some of the most trusted Western charities also wind up channeling donations towards terror and apologists for terror.

The organization MIFTAH, founded by Palestinian Legislative Council member and frequent Western media guest Hanan Ashrawi, is dedicated in its own words to "disseminating the Palestinian narrative", and receives funding from a host of worthy organizations, including the governments of Norway and Ireland, the UN's Population Fund, the Konrad Adenauer Foundation, Oxfam, and the British Council. MIFTAH's use of these donations has at times been troubling, as when a member penned an article claiming that Jews use Christian blood to bake Passover matzah, or when the group praised Wafa Idris, a 2002 Palestinian suicide bomber who killed 81-year-old Pinhas Takatli and wounded 150, calling her the "beginning of a string of Palestinian women dedicated to sacrificing their lives for the cause." Canada pulled out its funding in February 2014 due to MIFTA's extremism, but so far other countries and organizations have not followed suit.

Many of those same donors who support MIFTAH are listed on the website of Al-Haq, another group hostile to Israel. For 2014, Al-Haq listed among its donors the German charities Bread for the World and the Heinrich Boll Siftung, Irish Aid, Britain's Christian Aid and Norway's Ministry of Finance.

The European Union, Denmark, Norway, the charities Oxfam, Christian Aid, and the NGO Development Center, a joint initiative of Switzerland, Sweden, the Netherlands and Denmark, also fund the Palestinian Center for Human Rights, a group which called the 2010 reopening of the Hurva Synagogue in Jerusalem after its extensive renovation a "war crime", but which terms terror attacks against Israelis "resistance".

Unfortunately, scores of similar NGOs exist, smearing Israel and apologizing for terror while receiving funding from Western organizations that purport to further peace. With so many voices calling for violence against Jews, it is crucial that we investigate exactly where our money and support is going -- and not be afraid to speak up, demanding that our governments, communities and charities stop funding terror.

Rescuing the Wandering Jew
Bechukotai 5782: Divine Retribution
Behar 5782: Working to Live or Living to Work?
The Wholeness of Being Broken
Comments
MOST POPULAR IN Middle East
Our privacy policy