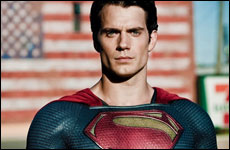 We all want to live in a world where goodness triumphs over evil.

Once I met him, I knew I wanted to be like him. Who wouldn’t want to fly, bend steel in your bare hands and “fight for truth, justice and the American way”? (Are we still allowed to call it “The American way”?) Every embodiment of Superman was one of greatness, sacrifice and heroism combined with a sense of humility and purpose of being.

I loved reading the adventures of Superman at the cottage on summer days as he battled Lex Luthor, Brainiac and a host of other villains “whose every impulse of the heart was only evil all day long.” To this day my comic collection of close to 700 titles, primarily from the 60’s and 70’s (the so-called Silver Age of comics), sit patiently in plastic bags and boxes waiting for a new generation of youngsters to move from their smart phones and ipads and appreciate their beauty and message. (Alas, it may be a long wait.)

It is well documented that Superman’s creators – two Jewish lads from Cleveland, one originally from my hometown Toronto and who patterned the Daily Planet after the Toronto Star – took many cues from our Torah to create the story. The similarities between Superman’s origins, being sent as a baby in a rocket ship from his world of Krypton before it would be destroyed, parallels the story of Moses being sent down the Nile in a basket for his own protection as his world was falling apart from the slavery and the infanticide around him. Superman’s original name is Kal-El – bearing the Hebrew name of God, El, and perhaps even invoking God’s voice since the Hebrew word for voice is Kol. Hence Kal-El means God’s voice – which is indeed what Moshe became as God’s prophet, lawgiver and voice of truth justice and goodness.

The meaning behind Superman is one that so resonates in a Jewish soul because the message and mission is so similar to that of Judaism’s. As father, Jor-El (Russell Crowe) tells his son in the movie:

"You will give the people of earth an ideal to strive towards.
They will race behind you, they will stumble they will fall.
But in time they will join you in the sun.
In time, you will help them accomplish wonders."

Is there anything more Jewish than the outsider, the alien, the one who does not fit in with the rest, the “nation that dwells alone” coming to earth and doing everything in its power to perfect that world and make it a better place? Judaism’s hallmark is to be an Ohr LaGoyim – a Light unto Nations – to be an example nation that strives to teach mankind of the grace, beauty and holiness inherent in truth and justice. And while we still have a lot of work to do, the Torah has indeed taught much of mankind basic ideals such as liberty and freedom for all, do not murder, do not steal, take care of the orphan, widow and the less fortunate, might does not make right, “Love your neighbor as yourself,” “Justice, justice you shall pursue,” universal education and a host of other notions that our world still grapples to learn and live by.

And just as Superman must engage in force at times, its sole purpose is only to defeat evil so that there can ultimately be peace on earth, the same way the Jewish people only wish to take up arms as a last resort to restore a peaceful equilibrium.

Rabbi Noah Weinberg zt”l, the Rosh Yeshiva and founder of Aish HaTorah, used to often say that deep down every person wants to be the Messiah. Every person has a secret, innate desire and sense of responsibility to not only just make the world a better place, but to do everything in our power to make it whole and perfect. It was this self-same desire that two young Jewish men, living in an age when the evils of Nazism began to take hold and threaten the world, it was this deep Jewish stirring that gave birth and rise to Superman.

Superman has become an icon for generations because its message, rooted in Jewish aspirations and ideals, is such a basic and universal one: We do want to live in a world of goodness, truth, fair-play, and one where - despite the trials and tribulations and times when we seemingly are on the brink of destruction - Good triumphs over Evil.

All we have to do is understand our mission and remain dedicated to it every day with the same passion and consistency that Siegel and Shuster did when they created their hero.

"I have to believe you were sent here for a reason
And even if it takes the rest of your life,
You owe it to yourself to find out what that reason is.”