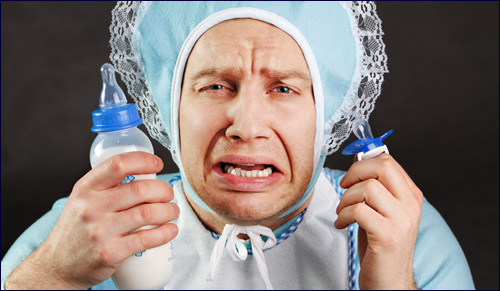 If your child can scale Masada, needs a shave or has a driver’s license, then it’s time to get rid of the stroller!

If you want to accurately gauge whether a particular synagogue is declining or thriving, simply count the number of strollers.

The more strollers parked outside on Shabbat morning, the brighter that synagogue’s future will be. In other words, every stroller carries not just a person, but also the hopes and dreams of the entire congregation. A stroller may be cradling the next Judah Maccabee, Queen Esther or Sandy Koufax. A stroller may carry the next David Ben-Gurion, the next Golda Meir or the next person to open an all-you-can-eat falafel stand on Ben Yehuda. (By the way, offering an all-you-can-eat option to “essen & fressen” Jews basically means you want to file for bankruptcy. No, not Chapter 7 bankruptcy. We’re talking about Chapter “Ate.”) Of course, not every stroller can hold a winner. Many strollers hold nothing more than a little vilde chaya who one day will become a bigger vilde chaya.

The more strollers parked outside on Shabbat morning, the brighter that synagogue’s future.

While communities should welcome strollers and the newest members who ride in them, synagogues should consider establishing some simple stroller-related guidelines. I’m not talking about draconian measures to wallop the wheeled. I’m talking about sensible rules to govern the pushing of the pampered. So, the question is: how can we make the synagogue stroller scene, which is filled with congestion and confusion, more manageable?

For starters, do not park your stroller directly in front of the synagogue’s entrance. When strollers block the doors, it creates an evacuation hazard. For example, if the synagogue announces at the end of the service that the kiddush is “sponsored by the shul” (which means the kiddush likely will be incredibly underwhelming), there will be a massive stampede exiting the building that will destroy anything in its path. So, if your stroller is part of a baby blockade near the doorway, kiss it goodbye. (For this reason, do not leave your kids sleeping in their strollers or, if you do, wrap them up in sufficient and breathable bubble wrap.)

Parking your stroller directly in front of the synagogue entrance also creates a dangerous social hazard because of the message that it sends. Just imagine if right before Shabbat begins, the rabbi’s car is parked right in front of the synagogue’s entrance just so the rabbi, after Shabbat ends, can make a quick getaway and avoid having to deal with congregants, board members and the paparazzi. Some might be offended by the rabbi’s parking selfishness and thoughtlessness. Well, if you park your stroller right in front of the synagogue entrance, some may feel the same way about you, especially if you insist on treating your precious little darling like Antoku, the former child emperor of Japan.

Speaking of Japan, strollers and rickshaws seem to have an awful lot in common. The word “rickshaw” originates from the Japanese word “jinrikisha,” which means human-powered vehicle. According to some scholars, the rickshaw was invented in Japan in the late 1860’s after the lifting of a ban on wheeled vehicles. Can you imagine if Jewish communities banned the use of strollers? That would almost be as bad as a Jewish community banning knishes, kibitzing and kvelling.

When it comes to purchasing a stroller, do not succumb to peer pressure. In other words, do not purchase the exact same stroller as your friends. When everyone buys the identical make and model, it only exacerbates the post-synagogue chaos. (Of course, if your child is acting like a total kvetch, you may secretly be hoping that someone mistakenly takes home your stroller and its cantankerous contents.) When buying a stroller, think outside the box and go with something unique, even if it means you will be socially shunned. But do not go overboard just to prove a point. Do not pack your infant in a rolling suitcase. Do not cart your kid around in a wheel barrow. Do not strap your child to a skateboard. Do not force your newborn to rollerblade. These are extreme and ill-advised alternatives so stick with a parentally- (and rabbinically-) approved stroller and stay within your wheelhouse, so to speak.

Can we all agree that when a child reaches a certain age, it is no longer appropriate for that child to ride in a stroller? For example, if your child can scale Masada, needs a shave or has a driver’s license, then enough with the stroller!  I actually believe that if some overly-protective parents had their druthers, they would continue stroller-ing their kids to synagogue at least up to the child’s bar or bat mitzvah. Doing so could be incredibly humiliating and debilitating for any bipedally-capable child and some studies show that children who are overly-strollered are ten times more likely to become a serial killer and twenty times more likely to act like a total nudnik.

Bottom-line: People operating strollers should follow a few basic rules of safety: (i) do not enter your stroller in a roller or demolition derby, (ii) never let go of your stroller at the top of a hill and (iii) always remove your child before folding your stroller.

Like Totally Awesome
Faith: the Axis Upon Which the Wheel of Science Turns
Love - Not Just About Chemicals Anymore!
Is There a Moral Code in a Virtual World?
Comments