Strangers on a Train in Germany 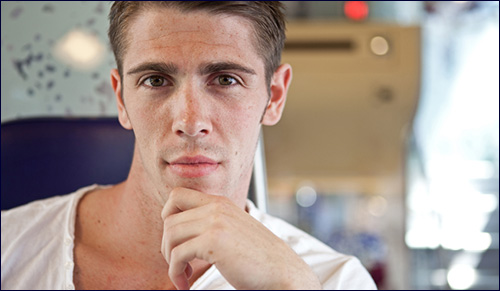 Who was this kippah-clad, non-Jewish looking German sitting across from me?

Frankfurt, Germany is closed down on Christmas, and I took the opportunity to visit Heidelberg, an hour away by rail. I walked through the train looking for a window seat where, guidebooks in hand, I could follow all the storied towns along the way. My eyes fell upon a young man wearing a black skullcap. An Orthodox Jew, I thought. Despite the pallid face of a yeshiva bocher, and the yarmulke clasped to his hair in traditional style, there was something troubling about the identification.

“Funny, you don't look Jewish.” The punch line from a joke about Chinese Hebrews tickled my mind. The face looked German and the hair in careful, casual wisps gently falling over the forehead suggested mod or punk rock.

But it was worth a try. I sat down facing the lad, who now looked as if he were in his early 20s. I don't know what made me so bold, but I started up immediately, and in Hebrew, “Ata Yehudi?'' (“Are you a Jew?'')

We established contact immediately. And a good thing, too, because he was getting off at Darmstadt, the first stop. I felt an urgent need to extract information. After visits to Bergen-Belsen and Buchenwald, I had to know what another Jew was doing in this land drenched with the blood of 6 million Jews.

“That's a serious question,'' the young man sighed deeply. “When I finish at the university in two years, I will have to decide whether I can continue to live in this country.''

He was born in Germany and had lived there all his life except for two years of study in Israel. He was living in West Berlin and working for a degree in sociology.

Yes, he acknowledged, opportunities for intense study in Bible, Talmud, and Hebrew are meager in West Berlin - none at the university. But he manages, he smiled, pointing to a sacred text he was carrying.

I needed to know more, and time was almost up. I felt inept and frustrated, unable to ask the right question.

“Isn't Darmstadt where the famous 15th-century manuscript of the Haggadah comes from?'' I asked, hoping that the question would somehow find the mark.

“Yes,'' he said, “and I believe that they keep it under glass in the rare book section of the Landesbibliothek. But, of course, the museum is closed today on account of Christmas.''

I took that as confirmation that nothing remained of the illustrious Jewish community that lived in the town for 500 years. Why ask particulars as to how the Nazis methodically hunted down and exterminated Jews even in the smallest of hamlets under their control?

We spoke intensely; we had a lot to cover in a short time. His parents, too, were born in Germany and spent the war years in Berlin.

I was preparing to hear another tale of how they were not recognized as Jews because they didn't look Jewish. That had been the story of the man in Warsaw who showed me around the ghetto on my recent trip to Poland.

Looking at the boy facing me on the train, I could believe that of his parents. Or were they hidden by some righteous gentile who was subsequently honored for bravery by Yad Vashem, the institution in Jerusalem devoted to the Holocaust? But he volunteered nothing, letting me dangle with the empty excitement of an overheated imagination.

The train was slowing down now and time was running out. Had I missed every clue? Calm down, I whispered to myself; not every Jew in Germany has a saga. He bent down to put his books into his bag, and the black skullcap now confronted me as a blatant proclamation of his orthodoxy. Why that suggested to me the key question, I cannot imagine, but I blurted it out.

“How do your parents react to your piety?''

“Badly,'' he said with a wan smile as he buttoned his coat. “They are very hostile.'' He spared me the final question. The train stopped; we had reached Darmstadt. He turned to go and paused only to add, “They were Nazis and are bitter anti-Semites. I converted to Judaism,'' which he repeated in English as if he was not sure of the Hebrew word.

“They never forgave me. I am going home to visit them on Christmas.''

This article originally appeared in 1987 in the Christian Science Monitor.

Burton Caine is professor of law at Temple University and recent president of the Philadelphia chapter of the American Civil Liberties Union.

Ukraine and the Jews
The Power Of Prayer
Va’etchanan 5782: A for Effort
Can You Show Me This "God?"
Comments
MOST POPULAR IN Israel
Our privacy policy
Aish.com Is Looking for Great Writers