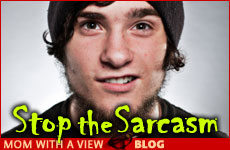 Teenagers everywhere beware. I heard a beautiful idea recently that is going to severely curtail your ability to communicate (no, it has nothing to do with texting!) There is no sarcasm anywhere in the Torah.

All the pre-eminent commentators agree that the very idea of speaking sarcastically was anathema to our forefathers. It was so totally inconsistent with their righteous character that it was inconceivable they would speak that way. Sarcasm is so dismissive and disrespectful of others that it would reflect such a lack of sense of their own dignity, a lack of recognition that we are created in the Almighty’s image.

Sarcasm is both cruel and undignified. It is not a form of speech befitting a Torah scholar or a righteous individual (or even someone who aspires to be a righteous individual). This includes eye-rolling, shoulder shrugging, muttering under one’s breath and all of the other ways in which adolescents express their dismissive attitude towards their parents.

But of course this isn’t limited to teens only.

Like profanity, sarcasm is a cheap laugh or an easy put-down. Outside of the parent-child relationship, it buys social status at the expense of the victims. It is unattractive yet has become all too common. Survivor-mode television shows require sarcastic hosts to gain higher ratings and comedians turn to sarcasm when witty repartee fails them. And of course, teenagers think they are oh-so-cool when they master a particularly clever (or so they imagine) sarcastic put-down. Like “I know you are but what am I?...” or something like that.

It is reflective, I believe, of the dumbing down of our society. And it is a reflection as well of the loss of dignity, of respect for each other, of a sense of the vast potential of the human being and the greatness available. If we truly walked around with the appreciation that we are created in the image of God, if we truly understood the gift of life the Almighty has given us and the vastness of the possibilities therein, we wouldn’t feel compelled to resort to sarcasm. And we certainly wouldn’t do it for some cheap laughs. Or at the expense of others.

If we understood what it is be created by the Almighty we would speak in way that is cultivated and considerate, that is both articulate and sensitive to the needs of others.

We make the mistake of thinking that sarcasm is a sign of precociousness, a clever, sophisticated use of humor. If we were truly wise, we would know that sarcasm is a limited and ultimately ineffective tool for communication. If we were truly wise, we would understand the need to use words appropriately – to nurture others, to uplift others, to create bonds with others – and to preserve our own dignity through carefully choosing our words.

Adolescents can be forgiven their fascination with the sarcastic. They are young. It will pass. They feel powerless and this seems like one of the only tools in their arsenal against their all-powerful parents.

But it should not be a habit that lingers. We know better. We are better. We deserve better. And so does everyone around us.

We Have No Idea What Others Are Going Through

Believe in Your Kids

Re-Entry: Life after the Pandemic
Why My Iranian Mother Didn’t Want Me to Become a Religious Fanatic
The Jewish History of Prague
Why the Sexual Revolution was Bad for Women
Comments
MOST POPULAR IN Family
Our privacy policy
Aish.com Is Looking for Great Writers