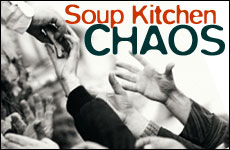 We are all hungry for something.

On a recent trip to Israel, I had the opportunity to spend time volunteering in a soup kitchen. I peeled industrial size sacks of potatoes, filling pots larger than a baby bathtub. I felt a giddy satisfaction.

When the lunch hour began I was transferred to the 'dining hall', a room with a dozen lunchroom style tables and a crowd of hungry people. It was my job to hand out the lunch trays to the waiting throng of diners, while others waited in line to collect food to take home for Shabbos.

A chaotic scene ensued. The smell of chicken, rice, potatoes and salad mingled with the heat of bodies pushing to get their food. I was instructed to give trays only to those who were seated. Not enough seats, hungry bellies and a pushy crowd soon landed a tray of salad on the head of a young girl at my side. Not only did this child have to endure the embarrassment of collecting food for her family, her hair was now a mess of cucumber and tomatoes. Tears welled in her eyes as I helped to smooth her hair.

"Zeh beseder, motek, it's okay sweetie," I assured her. But it didn't feel that way to me. An increasing band of tension stretched up my back circling my temples and tightening like a vice around my throat.

"Lady, it's not fair! You gave that woman two trays of food. They sit and eat while we who are standing get no food," a short elderly woman charged.

"You've given that table all the trays, nu, and none for us?!" another man protested.

Every time a tray would surface a crowd of hands would reach towards me. "Please sit down, I know you are waiting, I will get you a tray as soon as possible. I am doing my best." But my best was not enough. The shouts became louder, the pushing stronger. The chef had to break up a fight.

I recalled the stories told by my Bubbie about how some of the most civilized of men during the Holocaust were reduced to animals when scavenging for a piece of bread. I was witnessing the effects of hunger before my eyes.

Many thanked me as they left. A woman and I shared a laugh as she waited, conceding that laughing was all we could do. The panic of hunger was pushing all of us a little closer to the edge.

I left the soup kitchen feeling deflated and helpless, uncertain I had done much to help.

That Shabbos, I encountered two of the soup kitchen's patrons at a Shabbos table. On Sunday I passed another on the street and later than evening, I noticed a man sitting on the bus to whom I had handed a lunch tray. Why was I seeing all of these people?

If you had noticed any one of these people you would not have suspected their need to visit a soup kitchen. You couldn't have known their hunger or desperation. Perhaps this was the message, that hunger and need lurk in every corner. We cannot know who might be missing breakfast or uncertain of their next meal.

What we do with that hunger? Do we push or do we trust?

I arrived at Ben Gurion airport to catch my flight back home on one of the busiest travel days of the year. It was a frenzy of travelers. I was offered the option to be bumped from my over-booked flight in exchange for a free El Al ticket. Perfect, no? One hitch: I was to report to the check-in desk 79 at precisely 12:15 AM to learn my fate. If I was bumped I would be set up in a hotel until the morning flight; if not, I would need to scurry on board my original flight before it left.

I arrived at 12:13 AM at desk 79. But I wasn't the only one. A crowd ten-people deep encircled the counter. There was no way I'd be reporting to the desk on time. 12:15 AM came and went and I hadn't moved. I began to panic. What if I was indeed on my original flight? Would it leave without me? What if I was bumped but without checking in on time I lost my spot?!

I NEEDED TO GET TO THE FRONT OF THE LINE. NOW!

And then I understood. I was hungry. Not for food, but for security. So was everyone else in line. They needed attention, they needed a ticket. They too were hungry. The question is: what we do with that hunger? Do we push or do we trust?

When I stood in the crowded soup kitchen, I came face to face with the struggle we each encounter on a daily basis: how to deal with our hunger. Some of us are lucky. Our hunger isn't for food, or shelter or healing; it is for security, love, direction.

Ultimately, we each have to choose what to do with our hunger and strive to take notice of those around us who are in need. Even though we can't always see who needs what, sometimes we are lucky enough to pass along a needed tray or share a laugh while we're waiting.

P.S. My flight was bumped!

Brace for Impact
Vayelech 5783: Regret and Repent
Rabbi Sacks: Focus On the Important, Not the Urgent
Put Your Foot Down: Are Human Feet Poorly Designed?
Comments
MOST POPULAR IN Spirituality
Our privacy policy
Aish.com Is Looking for Great Writers