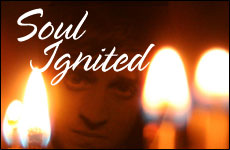 This Chanukah, tap into the light.

Stephen called me one day out of the blue.

“You set up a friend of mine through your singles program and now he’s happily married. He said it would be okay if I called. Can I ask you for a meeting?”

In all my years of teaching and working with people I have never had such an experience. Stephen arrived carrying an attaché case. He clicked it open and took out a glossy 8 by 10 photo of a beautiful woman.

"You have six months to find me a Jewish woman or I marry her.”

“I am not getting younger and I am anxious to get on with my life. I would like to have a wife and children. I am a successful businessman and all that I lack is a family. These photos are of a woman I’ve dated. She is a successful Hollywood actress who is bright and personable. She's told me that she's ready to marry me. I would like to be married but I don’t know if she's the love of my life. We are good friends and do have a good time together. She is not Jewish. Here’s the deal. You have six months to find me a Jewish woman or I marry her.”

I could not believe my ears. I felt as if I was in Mission Impossible.

I assured Stephen that I could not make such a promise but that I would do my best to introduce him to his soul mate. And the race against time began.

I wish that I could say I set him up with his soul mate that week.

Well, it didn't happen that week nor the week after.

Stephen would call and remind me that time was passing quickly.

After a few weeks of unsuccessful dating and tremendous pressure, I had an idea. I invited Stephen for Shabbos.

He had never experienced the lights of Shabbos before. I hoped that the sanctity of the day would enter Stephen’s heart and wake up his soul. I wanted him to feel connected to our people.

Shabbos arrived. Stephen sat at our table and I saw him gaze around the room. The Shabbos lights danced as the children lined up for their Friday night blessings. As my husband placed his hands on each child’s head and whispered the prayers I saw Stephen take it all in.

The evening passed and Stephen sat silently. He didn't say much and I had no idea what was going on within.

Sunday morning arrived and I didn't hear from him. I was a bit concerned. He had not said much and I knew that we were reaching the end of the road.

Stephen called by the end of the day and explained his silence.

“I'll tell you the truth. I have never in all my life felt in touch with my soul until I sat at your Shabbos table. I was speechless. How could I never have had this? Why didn’t I know about this? I want this in my life… I need this. And I was so stunned that I could not speak until now.”

“I just have one question,” I said. “Does this mean the deadline’s off?”

I did not find him his wife.

But he did find his bashert. Just the other week, Stephen sent me some beautiful photos. They were of his three little girls standing proudly beside their mommy and their Shabbos candle sticks.

A soul was ignited. A family was born. They are a link on a chain back to Sinai.

This Chanukah, look beyond the flames.

These lights are calling your name. Never give up. Not on your people and not on yourself.

Take a moment and see the spiritual strength of our people, the struggle to survive despite the odds. The quest to dig deep inside and discover a light we thought had been extinguished. It is the ‘pintela yid’, the eternal spark that burns within our hearts and souls. It is a flicker of a light, a tiny flame.

But it is alive waiting to be rekindled.

Related Article: Light in the Strangest of Places

Our Sages teach us that during the eight days of Chanukah the same spiritual lights that were created by miracle are once again accessible to every Jewish soul.

Tap into the light.

These are not merely candles. These lights are calling your name.

They are here so that you can look at them and infuse yourself with their holiness.

Never give up. Not on your people and not on yourself.

If you will it, the spark that lies within will become a fire that ignites your spirit.

We are a nation of miracles.

Stuck in JFK
Bechukotai 5782: Divine Retribution
Behar 5782: Working to Live or Living to Work?
The Wholeness of Being Broken
Comments
MOST POPULAR IN Personal Growth
Our privacy policy