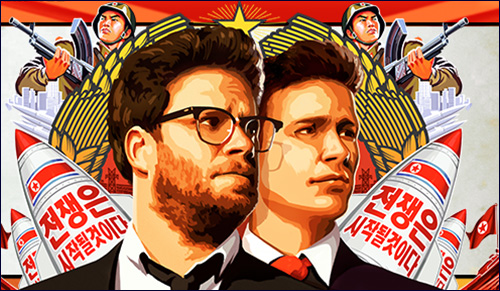 Is America letting the terrorists win?

Lots of folks are pondering the implications of the cancelled release of The Interview, Sony's satirical film about the assassination of North Korean dictator Kim Jong-un.

The saga began this past summer, when North Korea's state-run news agency promised "stern" and "merciless" retaliation if the film were released. In response, Hollywood executives ordered that thousands of images be digitally altered to avoid offending North Korea.

The appeasement did not work. Last month, Sony's computer system was hacked, ostensibly by those operating on behalf of North Korea. When the hackers – citing 9/11 – threatened to attack any theater screening the film, the film's stars canceled a series of promotional appearances and Sony pulled its television advertising. The next day, movie theaters cancelled their distribution agreements.

Sony blamed the theaters, but this does not answer why Sony did not immediately employ alternative distribution outlets – selling DVDs online or offering to stream the content.

This is not an issue of defending the film itself, which by all accounts is tasteless, silly and a mistake to have been made in the first place. Rather the issue is: To what degree will we let terrorists rule our lives?

Let's get a few things straight:

When Hollywood actor George Clooney tried to get his colleagues to sign a petition against the hackers’ demands, he was unable to obtain a single signature. “Nobody stood up. Nobody took that stand,” he lamented.

This is not the first time that Hollywood has capitulated to terrorists.

The writers did not want "a fatwa on my head" because of the movie.

Roland Emmerich’s disaster movie, 2012, depicts the destruction of the White House, along with religious landmarks such as the Sistine Chapel and St. Peter’s Basilica. One notable omission is the Kaaba in Mecca, Islam’s holiest site. “I wanted to do that, I have to admit,” Emmerich said. “But my co-writer Harald said, ‘I will not have a fatwa on my head because of a movie’... So I kind of left it out.”

Tom Clancy’s novel, The Sum of all Fears, revolves around a plot by Palestinian terrorists to detonate a nuclear bomb at the Super Bowl. The book is filled with radical Islamic imagery and ends with a beheading in Saudi Arabia. But when it was turned into a Hollywood action film, the villains were somehow changed from Muslim terrorists to neo-Nazis.

The First Amendment is being vetoed by terrorist thugs.

Is there a different way?

In Israel, the target of relentless terror, armed guards and metal detectors are posted at the entrance to banks and the post office; restaurant bills come with an added "guard surcharge." Despite the "inconvenient adjustments," Israel has succeeded in maintaining normal life.

Yes, we fear that by offending terrorists we could find ourselves in a bombed-out movie theater (even though in this case, Homeland Security said there was no credible threat). But a society that wants its freedoms has to be willing to fight for them.

The Ayatollah of Iran is carefully watching this display of weakness and cowardice.

The Sony case sets a bad precedent. You can be sure that the Ayatollah of Iran – plus dozens of other terror groups – are carefully watching this unfortunate display of weakness and cowardice.

The Sony case is not the first time, nor I'm afraid will it be the last. As George Clooney said, this opens the door to a slew of blackmail and ransom. "This could happen to an electric company, a car company, a newsroom. It could happen to anybody... Understand what is going on right now, because the world just changed on your watch, and you weren’t even paying attention.”

Hanukkah is the time we place a menorah toward the outside and spread the light. Ever since the Syrian-Greeks tried to snuff our life-affirming values, this has been our way of combating the forces of darkness. Now, 2,200 years later, if we hope to defeat intimidation and terror, we must increase our steadfast commitment to our most treasured values.

At War with Radical Islam?

The Ferguson Riots: A Non-Political Lesson
For Every Individual, A Torah Scroll
Allegiance To The Monarch
Meet the Real You: Yom Kippur
Comments
MOST POPULAR IN Current Issues
Our privacy policy
Aish.com Is Looking for Great Writers