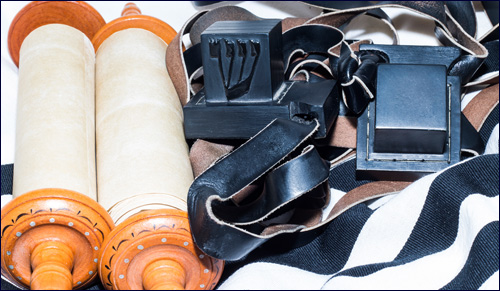 Leopold Plotkin wants to rehearse his bar mitzvah speech. His crazy family has other ideas.

The following is an excerpt from Something Is Rotten in Fettig, a satirical novel that is rooted in the prosecution of kosher butcher Leopold Plotkin for crimes against his fictional Republic. It chronicles the contentious dress rehearsal for Plotkin’s bar mitzvah speech, an intrafamily debacle that emotionally scarred the conflict-averse meat merchant years before he unwittingly came into conflict with every branch of government.

“If delivered properly, it will be a speech for the ages. If botched, I’ll be discredited”

The rehearsal vignette and other aspects of the book were inspired by author Jere Krakoff’s childhood in a contentious Jewish family in a colorful Jewish enclave of Pittsburgh. The portions dealing with Leopold Plotkin’s confinement in the Purgatory House of Detention and subsequent trial are loosely based on Mr. Krakoff’s experiences and observations as an attorney with the ACLU National Prison Project and other public interest legal programs.

During a calm interlude in his emotionally turbulent life, Jacob Plotkin drafted his son’s bar mitzvah speech on butcher paper.

“This is my magnum opus,” the patriarch proclaimed when handing Leopold the finished product. “If delivered properly, it will be a speech for the ages. If botched, I’ll be discredited. My legacy is in your hands.”

The burden of protecting his father’s legacy weighed heavily on the thirteen year old boy. As the bar mitzvah approached, he slept fitfully and wet his bed. On the eve of the ceremony, his anxiety spiked when a horde of relatives descended on the Plotkin flat for a rehearsal.

Seated cheek to jowl around a kitchen table designed for six standard-sized adults, fifteen men and women of various dimensions were poised to offer unsparing criticism. Leopold stood at one end, holding the butcher paper in his quivering hands. His father was seated at the other end, bracketed by Moishe and Misha Plotkin, the patriarch’s unhinged twin brothers. His mother was filling teacups with water, the only refreshment she was authorized to serve. Jacob played with his beard, pondering whether his son would do justice to his opus. While the patriarch’s heavily creased face sagged in anticipation of withering comments by the audience, he sighed deeply and emitted a faint odor of meat.

The guests shifted restlessly as they waited for the speech to begin. Heavy smokers, they puffed impatiently on cigarettes. Their demeanors ranged from grave to stern. In need of moral support, Leopold looked to his mother as she passed by with a teacup in hand. She smiled pleasantly and told him not to worry because he was an excellent speaker. Aware that the statement was a lie designed to bolster his confidence, Leopold’s spirits remained low.

“We don’t have all night!” Jacob Plotkin thundered impatiently to his son. “Begin already!”

The boy opened his mouth to begin. Both eyelids spontaneously closed. His toes lost feeling.

“Stand straight! You’re slouching!” the patriarch shouted before Leopold was able to speak. “Nobody will take you seriously if you slouch.”

“He’s not slouching,” Mordecai Himmelfarb, Jacob Plotkin’s brother-in-law, corrected. “He’s stooping. There’s a difference between a slouch and a stoop.”

Clearing his throat, the offended paterfamilias banged the tabletop with his calloused hand, glared at his son, and ordered the boy to stop stooping. “Another stoop and you’ll have to start again!” he warned.

As Leopold straightened his posture and reopened his mouth, Rose Keppler, Jacob’s third cousin, interrupted. “Wipe that foolish grin off your face, young man. This is a solemn occasion.” She turned to the patriarch and asked, “Did you see that grin?”

“As a matter of fact, I didn’t!” Jacob Plotkin growled emphatically. “The only grin I’m seeing is on your face! You were invited to listen, not to grin like you’re having a good time at my expense!”

“Did I grin, Max?” Rose Keppler asked her husband, who had been staring into a teacup filled with water.

“Not in the least,” the milquetoast confirmed despite suspecting that his wife had probably grinned. Grinning was part of her nature.

“Please, let the boy talk,” said Meyer Mandelbrot, an ex officio peacemaker at family gatherings, who was regarded as an obstructionist for his efforts and broadly despised by the family as a whole.

“He’ll talk when I tell him to talk!” Jacob Plotkin proclaimed.

“We determine when he talks,” Edith Snitzer, another cousin objected. “We’re the audience; we decide.”

“See what we did,” said peacemaker Meyer Mandelbrot. “We made the boy cry.”

“Why are you crying?” Jacob demanded.

“What do you know about crying,” Jacob replied. “You’re a grinner!”

“Where is the boy’s yarmulke?” Abraham Zitzer, another cousin asked.

“He doesn’t need one!” the patriarch exploded. “This is a kitchen, not a schul!”

“A bar mitzvah rehearsal, even in a kitchen, is sacred,” Zitzer insisted.

A brief silence emerged, except for Misha and Moishe Plotkin’s coughing, a major component of their hypochondriacal repertoire. Sensing an opening, Leopold began, “My dear parents and others, today I am ____.”

“Did I tell you to start?” Jacob Plotkin interrupted, pounding his fist on the table. “Didn’t you hear your uncles coughing? Don’t you have any respect for your sick elders?”

“You heard your uncles coughing. Show some respect,” brother-in-law Mordecai Himmelfarb echoed, in temporary solidarity with his enemy.

“The speech is too long,” Frieda Himmelstein, a great aunt complained. “It needs to be shortened and flattened. My mind drifted.”

“Yes, much too long,” lamented Isaac Fassbinder, Edith Snitzer’s former husband, who was invited because of his reputed objectivity. “Particularly the beginning, middle, and end. And like my ex-wife said, it needs to be flattened.”

“Nobody’s going to flatten it!” Jacob Plotkin proclaimed. “The speech is flat enough! Any flatter, it will be concave!”

“The boy never mentioned his relatives,” said an uninvited fourth cousin nobody recognized. “We were lumped together with ‘others,’ which was disrespectful to the extended family. Frankly, I was offended by the slight.”

“There was no lumping together,” Jacob Plotkin corrected. “I deliberately left all of you out. For your information, whoever you are, ‘others’ refers to acquaintances, not relatives.”

“Besides leaving out his relatives,” said the fourth cousin nobody recognized, “the speech had revisionist tendencies, which I know more than a little about, given my profession.”

“What profession is that?” asked Jacob Plotkin. “Professional intruder?”

“I stand by what I said,” the fourth cousin, an unemployed college professor, said resolutely.

“Does anybody know this man?” the patriarch asked of no one in particular as he dramatically lifted his palms in a questioning manner. Fourteen shrugs suggested that nobody knew.

“So, who the hell are you?” Jacob Plotkin demanded, leaning over the table.

“I have a comment,” said Mordecai Himmelfarb’s wife, Bertha Kepletsky, who had allegedly refused to take Himmelfarb’s name because it was difficult to spell. “I’m exhausted. The longwinded speech was fatiguing. Who needs sleeping pills with a speech like that?”

“That’s it!” shouted Jacob Plotkin. “I’ve had enough of your insults. Everybody out! Particularly you,” he said, glaring at Bertha Kepletsky. “You wouldn’t know a good speech if you heard one.”

“I would have lost my dinner if we had had anything but water to eat,” said Bertha Kepletsky. She faced Leopold who was shaking, slouching and grinning stupidly. “If I were you, young man, I wouldn’t say anything tomorrow. Sometimes, silence is golden.”

“Your invitations to the bar mitzvah are revoked!” the patriarch roared.

With that announcement, the relatives departed en masse. As they descended five flights of stairs, they debated whether the speech should have included references to pestilence, plagues, and locusts – none of which they recalled hearing. 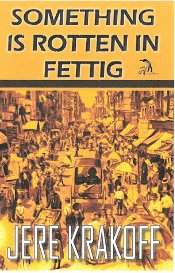 For the remainder of the evening, the patriarch revised his masterpiece and the son rehearsed the changes. Finally, the mother timidly suggested to her husband that it was important for the boy to get some sleep before the bar mitzvah. Jacob grudgingly agreed. As Leopold rested his head on a pillow, he prayed that his relatives would heed his father’s edict and stay home or, failing that, lose their bearings en route to the synagogue.

For more information about Something Is Rotten including instructions for purchase, please visit Mr. Krakoff’s website: www.jerekrakoff.com

The New Jewish Calendar
Should I Break Up, Get Engaged or Keep Dating?
Time Is Your Precious Commodity
A Constant World in Flux
Comments
MOST POPULAR IN Jewlarious
Our privacy policy