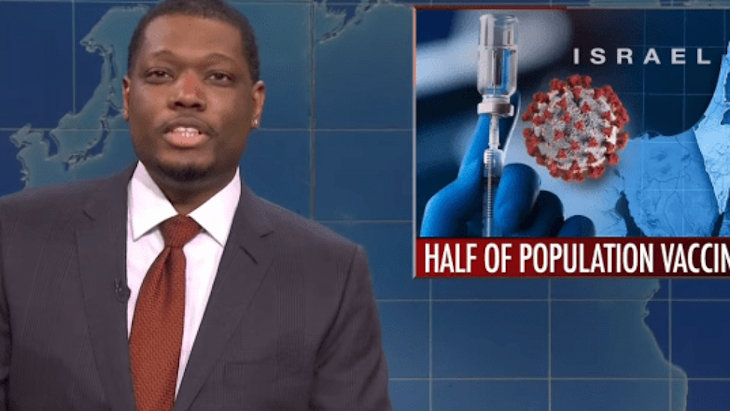 The show falsely accused Israel of only vaccinating Jews; the reality is far different.

A recent joke on the popular show Saturday Night Live (SNL) has tapped into anti-Jewish stereotypes, and echoes statements that are increasingly being made in the news.

The slur is that Israel, the world’s leader in vaccinating its population, is somehow only offering medical care to Jews. “Israel is reporting that they’ve vaccinated half of their population,” deadpanned Michael Che, “and I’m gonna guess it’s the Jewish half.”

The studio audience chuckles and Che moves on. It was only a brief joke, but in that moment countless viewers around the world absorbed the canard that Israel is denying lifesaving aid to its non-Jewish citizens. Worse still is the snide tone of Che’s joke, as if it’s apparently obvious that Israelis are racist and only care about themselves, even to the point of putting others in danger.

In the past several weeks, Israel has become the world’s leader in administering vaccines. By the time that Che made his joke, over 4.3 million Israelis – out of a population of approximately 9 million – had received their first of two vaccine doses, and nearly 3 million had received their second. It’s a huge achievement, and it’s most certainly not limited to Jewish residents of Israel. Yet Israel has found itself battling unfair allegations that it’s limiting access to vaccines to Jews only.

In January, Amnesty International said that Israel’s rollout of vaccines to Israeli citizens highlights the country’s “institutionalized discrimination” against Palestinians. In a January 26 speech to the United Nations, Palestinian Authority (PA) Foreign Minister Riyad al-Maliki accused Israel of “not provid(ing) any vaccine to the Palestinian people under occupation to this day, denying its obligation to do so.” Left unnoted in the speech was the fact that the Palestinian Authority had not asked Israel to help supply vaccines in PA-administered areas. In fact, the reality of Israel’s – and of the PA’s vaccine programs – is much more complex than many seem to realize.

Israel’s Covid-19 vaccination program began on December 19, 2020, and is already one of the world’s most extensive, delivering vaccines to a larger share of its population than virtually any other country. Early on in the race to develop a Covid-19 vaccine, Israel struck a deal with Pfizer-BioNTech. Paying what NPR calls “a premium” for the drugs, Israel secured an early supply of the company’s vaccine doses, and “struck a unique deal: vaccines for data”.

As America’s National Public Radio (NPR) notes: “The nation of some 9 million promised Pfizer a swift vaccine rollout, along with data from Israel's centralized trove of medical statistics to study ‘whether herd immunity is achieved after reaching a certain percentage of vaccination coverage in Israel,’ according to their agreement.”

"We said to Pfizer ... that the moment they give us the vaccine, we'll be able to vaccinate at the speed they've never heard of," explained Yuli Edelstein, Israel's Minister of Health, to NPR.

“Israel's small size and technologically advanced public health system offer an attractive model for Pfizer to demonstrate the impact of the vaccine on an entire population. Pfizer has not signed a similar agreement with any other country, company spokesperson Jerica Pitts says.”

Israel’s vaccine campaign has seen immunization sites set up in Jewish and Arab neighborhoods. Vaccine hesitancy has been greater among Israeli Arabs than Jews, and Israeli health officials have stepped up efforts to encourage Arab Israelis to receive the shots.

Coincidentally, the millionth Israeli to be vaccinated was 66-year-old Arab-Israeli citizen Muhammad Abd al-Wahhab, at a vaccination center in the Arab Israeli town of Umm al-Fahm. Israeli Prime Minister Benjamin Netanyahu was on hand to celebrate the moment. He later visited other Arab towns to encourage Israeli Arabs to come be vaccinated.

Later on, some people criticized Netanyahu for posing with al-Wahhab when it emerged that al-Wahhab had previously spent 14 years in jail for what the Times of Israel called “robbery and weapons charges.” But the fact that the millionth Israeli to receive a Covid-19 vaccine happened to be an Arab-Israeli and an ex-con showed Israel’s determination to distribute vaccines to all, without fear or favor.

The Times of Israel notes that “Critics of Israel’s vaccination policy point to the Fourth Geneva Convention, which states that an occupying power is required to provide vaccines to the inhabitants of the territories under its control.”

Saturday Night Live isn’t the only outlet to misunderstand Israel’s complicated relationship with the Palestinian Authority. After erroneously blaming Israel for not including Arabs living in PA-governed regions in its vaccine program, the BBC issued this clarification: Although there is a wider dispute over the issue, the (Oslo) Accords – which Israel signed with the Palestine Liberation Organization – give the Palestinian Authority oversight of public health under the principles of self-determination.

The Palestinian Authority has negotiated its own vaccination deals. According to the New York Times, “The Palestinians received 10,000 doses of Russia’s Sputnik V vaccine on Thursday (January 28, 2021). They expect to receive 37,440 Pfizer doses in February and hundreds of thousands of AstraZeneca doses in either late February or early March through the global-sharing initiative Covax… An additional two million doses of AstraZeneca are slated to arrive throughout March, Palestinian officials said.”

Some of the PA’s earliest vaccine doses were donated by Israel, which – according to the New York Times – had given thousands of doses to the PA by early February. The newspaper quoted Ghassan Khatib, a political scientist at Birzeit University, who argued that Palestinians in PA-controlled areas were loath to use Israeli-provided vaccines “because they were loath to sound ‘self-contradictory,’ seeking to obtain them independently while simultaneously ceding responsibility to Israel.

Even Al Jazeera, a news outlet that’s not often a fan of the Jewish state, recently reported that although “Palestinian President Mahmoud Abbas has struggled to secure vaccines for his people. So far, he has received 2,000 doses from Israel to inoculate medial workers in the West Bank, and 10,000 doses from Russia.

In recent days, according to The Times of Israel, “Israel has transferred several thousand doses to Ramallah (the seat of power for the PA) for the Palestinian Authority to vaccinate medical staff, and on Friday (February 19, 2021), the PA announced that Israel had agreed to vaccinate 100,000 Palestinians who are employed in Israel.

At the same time, there have been holdups of Russian-donated vaccines to Gaza: Israel maintains a blockade in order to prevent weapons being smuggled into Gaza and falling into the hands of Hamas, the terror group that rules Gaza. This has slowed down the movement of the vaccines into Gaza.

In the aftermath of the SNL joke, some Jews have called on the show to apologize. “Saturday Night Live’s ‘joke’ isn’t just untrue – it’s dangerous, a modern twist on a classic anti-Semitic trope that has inspired the mass murder of countless Jews throughout the centuries,” reads a petition circulated by the American Jewish Committee.

Israel’s Consul General in New York, Israel Nitzan, tweeted about SNL: “Spreading anti-Semitic Lies & misinformation is already a problem. Fanning the flames just to get a laugh is not only wrong, it’s irresponsible. Israel has made the vaccine available for its entire population equitably, regardless of gender, race or religion.”

Saturday Night Live should apologize immediately for its unfunny, untrue, and damaging “joke”.

The U.N.’s Gaza Report Is Flawed and Dangerous

Palestinian terrorism, American blood
The Promise Of The Land
Which Chat Are You On?: Parshas Behar/Lag Ba’Omer
Do You Like Slow-Cooked Food? Thank the Jews
Comments
MOST POPULAR IN Middle East
Our privacy policy