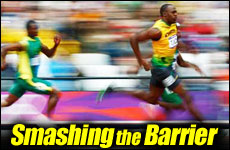 Lessons from Usain Bolt and other running legends.

Watching Usain Bolt run the 100 meter dash at the Olympics was nothing short of electrifying. The ease to which this world record holder from Jamaica breaks away from the rest of the pack in the last half of the race can take one's breath away. The thought of someone running 100 meters in the 9.6 second range is almost impossible to believe.

In fact, even running it in 9.8 seconds was impossible in everyone's mind. That is, until Maurice Greene did so on August 22, 1999. Since that record-breaking run, 25 people have broken that time, culminating in Bolt's 9.58 world record ten years later on August 16, 2009.

This phenomenon brings Roger Banister to mind. Bannister was a 25-year-old English medical student at Oxford University who was also an amateur runner. He dedicated a great deal of time and energy to the pursuit of running a mile in under four minutes. At the time, it was thought to be impossible for a human being to run a mile at that speed. The world record of 4:01.3 had stood for nine years and experts regarded this as an insurmountable human limit. Some physiologists even thought that running the mile in less than four minutes was dangerous to the health of any athlete who attempted it.

Roger Bannister thought otherwise. He had already won the British championship in the event and he applied his scientific training and medical knowledge to smashing the four-minute barrier. Bannister used intense interval training, an innovative method of distance running and a sprint technique to fine-tune his speed.

Sure enough, on May 6, 1954, Bannister ran the race of his life and collapsed to the ground immediately upon crossing the finish line. Bannister explained, "It was only then that real pain overtook me. I felt like an exploded flashlight with no will to live; I just went on existing in the most passive physical state without being unconscious." Two track officials held him up while spectators converged on him. The crowd was silent until they heard the announcer begin to proclaim Bannister’s time. “Three…” The cheers of the crowd drowned out the rest of his time. Despite the 15-mile-per-hour crosswind, Bannister had run the mile in just three minutes and 59.4 seconds.

The four-minute mile barrier had been broken! The world was in shock. The unthinkable, what was considered beyond human ability, had occurred. Bannister’s time was referred to as “the Miracle Mile.”

We live with this concept, both positively and negatively, on a regular basis. We may have a friend who pushes the envelope and crosses a certain line in terms of misbehavior and, suddenly, it becomes something which we may feel we can do, as well. This is certainly part of the message behind the Jewish teaching that “Woe onto the evil person and woe onto his neighbor.” (Tractate Negaim 12:6) The “neighbor” sees that his friend did something wrong and this puts ideas into his head regarding what he can do, much like Roger Bannister put the idea in people’s heads that the four-minute mile was possible.

The better analogy applies to positive actions. There is a Talmudic saying that “Jealousy about study leads to increased wisdom.” (Tractate Bava Batra 21a) When one person sees how much the other is able to learn, this arouses jealousy and a determination to accomplish the same or more. Similarly we are taught to open our homes to wise people. (Chapters of our Fathers 1:4) When we are around great people and we see what they can accomplish, we recognize that we can do the same.

So strive to surround yourself with positive role models who have smashed through barriers and demonstrated that you can indeed accomplish way beyond what you can imagine.  Then dream the impossible dream and go for it to make it happen!

All You Need Is Love

Giving Everything We’ve Got: An Inspiring Story

Slowing Down
It Takes A Lot Of Faith To Be An Atheist
How Instagram Brought Back This Nostalgic Soup
What Makes Eli Run?
Comments
MOST POPULAR IN Spirituality
Our privacy policy