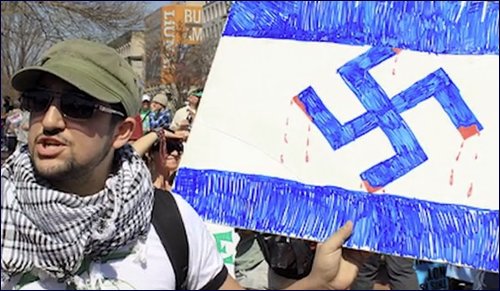 1,986 anti-Semitic crimes were reported, a 57% increase on the previous year.

Anti-Semitism skyrocketed in 2017. In the U.S., 1,986 anti-Semitic crimes were reported, a 57% increase on the previous year and the second highest level ever recorded by the ADL since they began keeping track of anti-Semitic incidents and crimes in 1979.

Students were particularly targeted by this latest surge in Jew-hatred. The ADL tracked 457 instances of anti-Semitic harassment and bullying in elementary and high schools in 2017, a 94% increase from the year before. Students as young as 10 have been subject to verbal abuse, with Jewish children being taunted with “jokes” about the Holocaust and told they are liars or bad people because they are Jewish.

On college campuses anti-Semitic vandalism and other assaults surged in American by 89%, to 204 instances, fueled in part by a surge in far-right extremist rhetoric on campuses following the violent “Unite the Right” rally in Charlottesville, Virginia in August 2017. New York University, Columbia University, the University of Illinois in Chicago, Brooklyn College and others have all seen virulent anti-Jewish posters and flyers on campus. In one typical instance, flyers posted at the University of Minnesota in February 2017 read “White Man, are you sick and tired of the Jews destroying your country through mass immigration and degeneracy? Join us in the struggle for global white supremacy.”

2017 was also the first year on record in which anti-Semitic crimes were recorded in every American state. I some states, the rise was dramatic: anti-Semitic occurrences jumped 90% in New York state, 43% in Pennsylvania, 42% in Massachusetts, and 32% in New Jersey in 2017. The largest increase was in vandalism. 2017 saw an 86% jump in anti-Semitic vandalism such as swastikas and anti-Semitic statements. Harassment also increased markedly, rising 41% in 2017. (Thankfully, the number of anti-Semitic assaults decreased in 2017: dropping from 36 in 2016 to 19 in 2017.)

The trends in the U.S. mirrored that in other countries. 2016 saw the highest number of anti-Semitic crimes ever recorded in both Britain and Canada. In Australia, anti-Jewish incidents rose nearly 10% in 2017, and New Zealand Jewish leaders have warned of rising anti-Semitism in 2017 as well.

For those of us in the United States, this surge in anti-Jewish rhetoric and action comes as a shock. For many, overt anti-Semitism is something taboo, a prejudice we could never imagine experiencing in polite society. Hearing an anti-Jewish slur – from the left or right – or seeing an anti-Semitic flyer or social media post shakes our beliefs, suddenly making our situation seem precarious and calling into question our assumptions about our secure place in the country we call home.

When I was a child, my brother and I came home from school one day to see that someone had carved a small swastika into the paint on our front door. My parents dismissed it as a childish prank, but for me, that awful mark became something I thought of endlessly. Who had put it there? What did they want us to feel when we saw it? Was it someone we knew? Could it even be one of my friends? For years, I’d look at classmates or neighbors, or even the mailman and wonder who wanted to harm us and make us feel unsafe in our homes. It was a stark reminder that some people thought that my family and I had less right to be here than others.

These latest statistics on surging anti-Semitism in the U.S. have come out at a time when Jews are around the world starting to prepare for Passover. The Torah tells how the Yaakov and his family moved down to Egypt in order to escape famine in the Land of Israel, and this small Jewish tribe thrived and grew, becoming an integral part of ancient Egypt.

Joseph became the Pharaoh’s right-hand man and Jews enjoyed a special place within the mighty Egyptian kingdom. For many years, our Jewish ancestors dwelled safely and were integrated in what was the most advanced kingdom the world had ever seen.

Until one day “a new king arose over Egypt, who did not know of Joseph” (Exodus 1:8). Suddenly, the very success of the Jews was held against them; the Jews were criticized for being numerous and strong. The Talmud (Sotah 11a) suggests that perhaps the “new” pharaoh in question wasn’t a new leader at all, but merely was expressing a new world view, one in which Jews were suddenly scapegoated and less secure, a possible fifth column.

Jews living through this moment of increasing Jew-hatred have many options. We should be more vigilant in reporting and speaking out against prejudice. We should stand up for the many rights our society affords us. It’s crucial we make allies with other groups in order to stand against hatred.

But the current surge in anti-Jewish incidents also reminds us that, like our ancient ancestors in Egypt, we cannot ever take our security for granted. At times “a new king”, or a new attitude, can arise. At these times, it’s crucial we stand together, strengthening our Jewish community and Jewish identity. Only when we’re united, proud Jews can we hope to stand up to and combat the rising tide of Jew-hatred we are seeing.

Get Out: Jews & Elite American Universities

Retorno: 12 Steps to Life
Time Is Your Precious Commodity
A Constant World in Flux
The Abortionist of Auschwitz
Comments