Sin of the Spies – Who's in Charge? 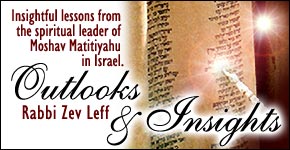 Living in a material world.

Prior to the departure of the 12 spies, Moses changed the name of his disciple Hoshea to Joshua. That changed contained within it a prayer that God save Joshua from the plot of the spies. It remains to be explained, however, why Moses agreed to send the spies in the first place if he was aware of a plot to malign the Land of Israel. In addition, why did he pray for Joshua alone and not for Calev and the others?

The Vilna Gaon (in Emuna VeHashgacha) explains that there are three ways in which God manifests His Divine Providence. The first is called hanhaga nissis, the manifestation of overt miracles. This was the manner in which God related to us during the 40 years in the desert. A Cloud of Glory accompanied us by day and a pillar of fire by night; we ate the Heaven-sent manna; and our thirst was quenched by water from a well that flowed from a rock, which accompanied us on our journey. When we sinned, Divine retribution followed immediately in an unmistakable fashion.

The second type of Divine Providence is called hanhagas nissim nistarim. In this stage, God relates to us through hidden miracles. This describes the manner in which God related to us in the Land of Israel, prior to our exile. At that time, a direct relationship between nature and Torah observance was evident. When we kept the mitzvot and toiled in Torah, the rains fell in their proper times and amounts, health and wealth were our lot; and when we sinned, drought and famine followed.

Since our exile from Israel, we have experienced the third type of Divine Providence, hester panim. In this stage, God hides His face from us and our ability to see God's Divine Providence in the world becomes impaired.

The Vilna Gaon explains that the various manifestations of Divine Providence differ only in our perception. In reality, God controls and guides the world equally in a period when we experience Divine miracles as a matter of course, and in a period where all we see is the workings of nature. God merely hides His face in the latter period.

Our forefathers in the desert were aware that upon entering the Land of Israel, the manner in which God related to us would change from one of open miracles to one of miracles within nature. Manna would no longer descend from the heavens; rather, we would plow and plant and harvest in order to eat. A well would no longer accompany us; rather, we would depend on rainfall to quench our thirst.

Their mistake, however, was to reason that if their lives were apparently subject to the same natural order as the rest of the world, then their ultimate success or failure depended on their own military prowess. This was a grievous error.

It was this mistaken outlook from which Moses prayed that Joshua would be spared. Moses reasoned that he could better prove to the people their mistake by letting them actually see the Land of Israel. He hoped that they would realize the impossibility of conquering Israel with their own might. And yet God had assured them that they would in fact conquer the land. They should have concluded that God obviously planned to continue aiding them, even if in a less openly miraculous fashion.

Joshua, who was to lead the Jewish people during this new stage of Divine Providence, required a special prayer that he be spared from a distorted perspective on nature. The name Joshua signifies – Hashem Yoshiah – May God save you. The Divine name represents the synthesis between the apparent cause and effect of the natural world and God's intimate spiritual link with man – the yud represents God's creation of the World to Come, and the heh the creation of this world. Moses prayed that Joshua see nature as nothing more than a veil to God's direct Divine Providence. Hence Nature – HaTevah – and Elokim are numerically equivalent.

Moses told the spies to bring back the fruits of the Land of Israel precisely to drive home the lesson that they would still be completely dependent on God's beneficence. Without water, fruits cannot grow, and in Israel water depends solely on rainfall, which is obviously not in man's hands. Moses wanted them to recognize that even though there would be more effort required to secure a livelihood in the natural setting of Israel than in the desert, the final result would depend no less on God than when the manna descended directly from Heaven.

Unfortunately, only Calev and Joshua grasped this point. The others saw only that it was beyond their "natural" abilities to conquer the land, and concluded that even God Himself, as it were, could not help them since He had chosen to let them be governed by the natural order. This reasoning led to the purposeless crying on the night of Tisha B'Av when the people wept as a sign of hopelessness.

To correct the purposeless tears of that Tisha B'Av eve in the desert, our Holy Temples were destroyed on Tisha B'Av and we were thrust into exile where we would come to see clearly our dependence on God. But rather than crying over our helplessness, our tears on Tisha B'Av must proclaim: "God, You promised that we would be redeemed from this exile. We cannot achieve this redemption through our own efforts. Therefore You must redeem us."

Rabbi Yerucham Levovitz, the great Mirrer Mashgiach, explains the Mishnah at the end of Sotah to mean that Moshiach will not come so long as we attribute our successes and failures to "natural" causes. As long as we look for political, economic and sociological explanations of world events, and excuse ourselves from Torah learning on the grounds that we must earn a livelihood, we will not merit an end to our exile.

Let us strengthen our faith and trust in God so that we can finally dry the tears of Tisha B'Av and celebrate it with jubilation, for a Redeemer will have come to Zion.