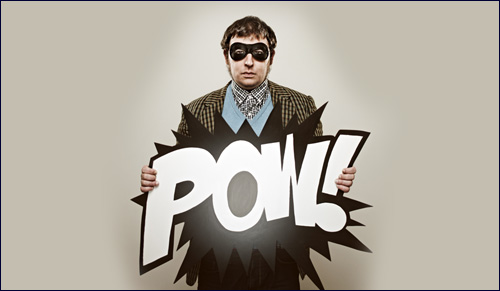 Beware of Yichus Man whose superpowers belong to his great-grandfather who he talks about all of the time.

Summer is the time for movie blockbusters and in particular, superhero movies. This year Spiderman and Wonder Woman are the big releases and of course we are all very pleased that Israeli Gal Gadot is making it in the film industry. But should we be satisfied with Wonder Women, when there are so many great Jewish Superheroes that we have, who are not connected to Greek mythology?

Brisket Woman- Everything she makes is ‘very easy.’

Here are some superheroes from the The Legion of Torah. And yes, this is going to be as cheesy as it sounds, so have fun with it, and add your own Jewish superheroes.

If you do not understand some of these superheroes, try to find Translation Man, who can translate any Hebrew or Yiddish words into English.

Brisket Woman- Everything she makes is ‘very easy.’ Whenever somebody asks her how she made a dish, she says ‘it is easy.’ Her kryptonite is yelling children, which causes her to burn things.

Beard Man- Weaponizes food that is stuck in his beard. Sometimes he has salt in there, which he uses to blind the villains. Motorcycles are his kryptonite.

Kiddush Man- His elbows are sharp and strong, as he uses them to make his way towards food.

Halacha Man- Shows up whenever you do an Aveirah (a sin). He saves Jews from sinning. His kryptonite is non-kosher restaurants that look really good.

Shidduch Woman- She sets you up with people you do not want to go out with. If you keep fighting, she has a way of making you feel like a nothing by saying stuff like, ‘You are not that good looking yourself.’

Matchmaker Man- A villain who is trying to take down Shidduch Woman. He sets people up, but is very shallow about it, as he matches people that are attracted to each other.

Hagbah Man- Lifts people and unravels them, like he does the Torah. Has the ability to never drop somebody, brought about his go to move of taking people to rooftops and scaring them into fasting for 40 days. His side-kick, Galila Man, sometimes slows him down, with his inability to wrap things fast enough.

Yente Woman- A villain who speaks Lashon Hara, always gossiping. She finds a way to talk about all people and their families. With sentences that always begin with 'did you hear?' she draws you into the stories about Shlomi and how he put on weight. Her kryptonite is a decent word about somebody.

Mussar Man- Fights against Yente Woman. He gives speeches. That is his power. The power to talk for an hour and a half about the one minute thing that you did wrong. He makes you never want to sin again, in fear of another talk.

Kugel Woman- Saves Shabbos. Feeds all including villains. Her power is pasta that is not in coagulated form.

Menorah Woman- Throws fire from her hands which have seven fingers. She never runs out of oil.

New Oleh Man- The new immigrant to Israel finds out what you did wrong, complains and does nothing about it. His complaining will bother you, but he will always be around, watching you. He then finds a way to take money from your government, which helps him infiltrate.

Matkot Man- He takes a ball and hits people with it, while they are leisurely walking down the beach. His kryptonite is anybody that likes competitive sports.

Dead Sea Woman- Bigger than Deadpool, as she is a sea. Seas are bigger than pools. She works along Beard Man. While Beard Man throws salt at the eye, Dead Sea Woman finds your tiniest of wounds and injects them with salt. Her kryptonite is people who use natural resources.

Shuk Woman- She yells at you until you buy stuff. Her voice is so scary that you will find yourself not wanting to bargain. She is very excited about burekas. Her nemesis is Pita Man.

Pita Man- A villain who gives you food that tastes great, such as falafel, but catches up with you later.. His kryptonite is plates.

Israel Woman- Kryptonite is other nations blaming her for stuff, causing her to feel guilty for her existence.

Seder Man- Keeps you at a meal for a very long time and doesn’t let you eat when you are hungry. His weakness is leavened bread.

Sufganiot Grinch- Sneaks into Jewish homes for the 8 nights of Chanukah and sucks all of the jelly out of the Sufganiot. This is why Sufganiot doughnuts in Israel are rarely found with enough jelly. His goal is to hinder Jewish enjoyment of holidays. His kryptonite is chocolate filling.

Box Man & Recycle Man- Comrades in arms who both have cheap costumes. Box Man is what my mom dressed me up as for Purim. His kryptonite is parents that aren't willing to spend money on a costume, leading to embarrassment in the third grade. Their weakness is costumes that have capes, such as pajamas.

Naches Man- His children all have superpowers. He also has an ability to embarrass any child by talking about them in front of them, as though they are not there. Naches Man has the ability to make his child invisible, while talking about how well they are doing in school.

Mom Woman- She can do anything Abba and Naches Man do, but she does it better. She does it with an empathetic touch which makes you feel worse.

Yichus Man- His great-grandfather had superpowers. He tells everybody about his grandparents. All the time. Other than that, he has done absolutely nothing.

Chutzpah Man- A villain who asks inappropriate questions. He has a lot of nerve. Goes to Kiddush and fights off Kiddush man by cutting him off. He eats all the brisket and takes it first. He tells Shidduch Woman that he doesn’t appreciate her matchmaking ideas. He tells parents that they are not raising their children right. Naches man is constant battle with him.

Chulent Man- What is his superpower? Tune in next week when we...

OK, spending my time on this was slightly embarrassing but our children need superheroes that believe in monotheism!