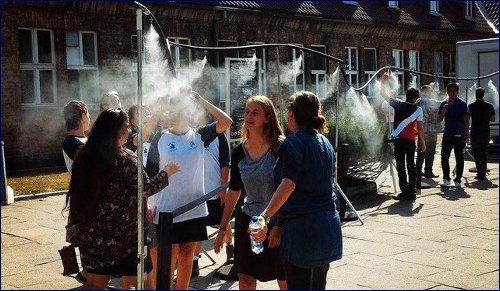 Do you find this photo offensive? A group of tourists are cooling off during a massive heatwave at makeshift “showers” that spray a cool mist of air. Similar contraptions can be found across Israel’s tourists sites during the heat of the summer. They make a difference.

Only problem: the showers in the photo are near the entrance of Auschwitz, the death camp in occupied Poland. Israeli tourists on Sunday were shocked and outraged over the showers. “As a Jew who has lost so many relatives in the Holocaust, they looked like the showers that the Jews were forced to take before entering the gas chambers,” visitor Meir Bulka, 48, told The Jerusalem Post.

The caretakers of Auschwitz defended their actions. “Because of the heat wave in Poland, sprinklers which cool the air were placed near the entrance to the museum… We have noticed cases of fainting among people. Therefore we must do everything possible to minimize the risks connected with the heat and high temperatures and take care of the safety of health of our visitors. The sprinklers are installed on the days of highest temperatures and removed with the temperature drops.”

In other words, they were just trying to help.

My two cents: Yeah, they could have thought this through better, but is this the issue over which the Jewish world needs to express outrage, making headlines around the world? I think we’d be better off focusing our moral outrage on issues that have real consequences.

What do you think?

Lazy Eyes
Grilled Israeli Lamb and Veggie Kabobs Recipe
How To Barbecue Like an Israeli
Pain is a Reality; Suffering is a Choice
Comments
MOST POPULAR IN Jewish Society
Our privacy policy