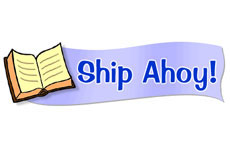 Adventures of Danny
and Dina

The captain of the cruise ship took the microphone and announced in a loud voice that could be heard over the whole ship: "We are approaching the Island of Shuv. Everyone has permission to disembark and tour the island. When you hear the first horn blast from our ship, get organized and ready to return. At the second horn please board the ship. The third horn will signal that the ship will pull out to sea. Please enjoy your stay. Ship ahoy."

Danny and Dina got off with their parents. All the other people got off the boat too and enjoyed the island's beautiful tropical plants and scenic views. It was truly a wonderful place. There were streams of water that were so crystal clear they could even see the fish inside. The mountains and water-falls were remarkably stunning.

Then the first horn was heard. Danny said to the others, "Let's go, we've got to get back."

"Right Danny," said his father. "We don't want to be late. Let's get going." And the four of them made their way back to the ship.

Some of the other people returned also at the same time. However, many of the others said, "We still have time, let's tour around some more." Then the second horn was sounded. Some people rushed back to the ship, but there were still some people who said, "There is still a little more time. We might as well enjoy ourselves."

Then as the ship blew its horn for the third and final time, it started moving away. Oh no! There were still passengers enjoying themselves walking around on the island. They realized now that they had run out of time, so they began racing towards the dock. When they got to the edge of the dock, the ship was already too far out at sea. It was too late, the ship was gone.

Dina and Danny looked out to the island from the deck of the ship. They felt very sad for the people who missed the boat. "Danny," asked Dina. "Do you think those people will be stuck there on that island for the rest of their lives?"

"No," said Danny. "Every year this ship stops at the island. If they don't get off the island by then, they'll be able to get on the ship when it comes by next year.

God gave the Jewish People a gift called teshuva, repentance. This means returning to God after having been out of touch with Him.

We get out of touch with God when we forget ourselves and do things that we weren't supposed to do. But have no fear -- teshuva is here.

Every year in the month of Elul we have an opportunity to fix up anything we may have done wrong. Actually, we can do this at any time of the year. It's just easier in Elul.

In synagogues throughout the world the shofar is blown. It's like the ship's horn to get us thinking and remind us to consider the things we've done throughout the year. How lucky we are, that even if we did something wrong, we still have a chance to fix it before the end of the year.

But we have to be careful. Sometimes people think they've got the whole month. They're too busy enjoying themselves doing other things. Then comes Rosh Hashanah which is like the second horn blasting, but some people still hesitate and say, "We've got until Yom Kippur." But then when Yom Kippur rolls around, it is the last chance to fix those mistakes. At the end of Yom Kippur day, one last Shofar blast is sounded. Those who aren't on board by then have missed the boat.

Q. Why didn't the people come back to the boat the very first time the horn blew?
A. Because they were too busy having a good time.

Q. Why did Danny and Dina feel sad?
A. Because there were people who missed the boat. They might not be able to make it back until a year later.

Q. What are the three different times the shofar is blown to get us thinking?
A. During the mornings of Elul, on Rosh Hashanah and at the end of Yom Kippur.

Q. Why is it better to already think about these things at the beginning of Elul?
A. Because if we put off until tomorrow what we can do today, we may not get it done. We may miss the boat!

Q. What advantages are there by doing things sooner than later?
A. Once you're done you'll be free do other things. The work won't pile up.

Q. Can you think of anything that you sometimes want to "push off" to do later instead of right away?

Q. Can you remember a time where you delayed in getting something done and wished you hadn't?