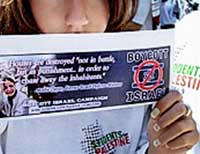 In 1980, following its peace treaty with Israel, the Egyptian parliament voted to end its economic boycott of Israel. The Arab boycott was formally declared in 1945, stating that Arab countries would not do business with Israel, nor with any company which sold products to Israel. (Officially, the boycott extended its blacklist one step further, to include any company that did business with a company that did business with Israel.) The objective of the boycott was to isolate Israel from the international community, and deny it the ability to build military and economic strength. In 1977, the U.S. Congress passed a law prohibiting American firms from cooperating with the Arab boycott. Companies such as Pepsi, which had long observed the boycott, now began selling in Israel. In recent years, with greater peace overtures between Israel and Arab neighbors, the boycott has withered in strength, though it remains official policy of most Arab countries.

In 1986, the Space Shuttle Challenger disintegrated 73 seconds after the launch of its mission, when an O-ring seal in its right solid rocket booster failed. All seven crew members were killed, including Judith Resnik, 36-year-old Jewish American. Challenger was one of two space shuttles destroyed during a mission, the other being Columbia in 2003 which included Israeli Ilan Ramon.