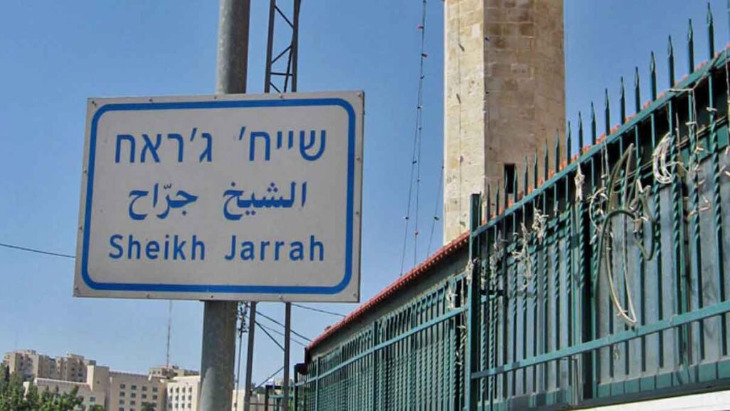 What really happened in Sheikh Jarrah, and what the laws are pertaining to the property that was the subject of the dispute that preceded the current military operation.

A long-simmering controversy over the fate of Jewish-owned land and Palestinian tenants in the Sheikh Jarrah neighborhood of Jerusalem has once again become front page news after yet another court decision reaffirming the pre-1948 Jewish ownership of the land and the obligation of the Palestinian tenants to pay their rent or be evicted. At the same time, false claims have been made that the Israeli laws are unfair because Jews can recover property in the West Bank, but Palestinians can’t recover property in pre-1967 Israel.

While Sheikh Jarrah is home to the American Colony Hotel and the former Orient House of the late Faisal Husseini, it is perhaps best known to Jews for two reasons:

First, in April 1948 Palestinian attackers carried out a horrific massacre in Sheikh Jarrah, killing 78 Jewish doctors, nurses, patients and others, who were in a convoy up to Mt. Scopus and Hadassah Hospital. The massacre was observed by British soldiers, who did nothing to stop it.

Second, the proximity of Sheikh Jarrah to the Tomb of Simon the Just, a prominent Second Temple High Priest. Simon’s Tomb has been a Jewish pilgrimage site for many hundreds of years, and religious Jews have therefore been eager to buy land and live in the area. In 1876 Jews bought Simon’s Tomb and an adjacent field of 18 dunams from Arab owners. The buyer, a committee of Sephardic and Ashkenazi Jews, divided the property. While the Ashkenazi half remained vacant, the Sephardic Jews began building homes on their half, establishing a community that eventually numbered in the hundreds before diminishing in the face of Arab violence in the 1930’s.

During the war invading Jordanian forces took Judea and Samaria, including Sheikh Jarrah and other parts of Jerusalem, and the Jews who survived the fighting had to flee. The Jordanian Custodian of Enemy Property took control of all West Bank property owned by Jews including Jewish buildings and land in Sheikh Jarrah. Incidentally, the Jordanian Custodian also took property in the West Bank that belonged to Arabs who continued to live in what became Israel, since like Israeli Jews, these Israeli Arabs were now citizens of an enemy state.

(It should be mentioned that the laws underlying the Jordanian Custodian of Enemy Property, and the similar Israeli Custodian of Absentee Property that will be discussed below, were based on inherited British Mandate law, which is why the offices had similar names and responsibilities.)

Ownership of much of the Jewish land taken by the Jordanian Custodian was transferred to the Jordanian government, which used it, for example, to construct government buildings in East Jerusalem, and to create the Dheisheh Refugee Camp – which is built entirely on Jewish-owned land. In addition, Palestinian refugee camps at Qalandia and Anata were built in part on Jewish land that had been taken by the Custodian. (See Arab Building in Jerusalem: 1967—1997, Israel Kimhi, p48-49; for Dheisheh, see also, from the leaked Palestine papers, NSU Draft Memo Re: Rights of Jews Within the OPT Acquired pre-1967.)

In 1956 the Jordanian Government reached an agreement with UNRWA to use the vacant Ashkenazi land in Sheikh Jarrah to build houses for 28 Palestinian refugee families. Under the scheme the Custodian leased the land to the Jordanian Ministry of Development, and the United Nations (UNRWA) funded the construction:

The refugees would agree to give up their refugee assistance and ration cards and would pay nominal rent for a probationary period of three years and three months. Those tenants who lived up to the lease terms would be allowed to sign a long-term lease of 30 years, and after that a further 33 years.

The tenants claim that under a side agreement they received title to their homes after the initial three-year period, but there is no evidence of such an arrangement, which would obviously conflict with the fact that they had to sign a lease.

In any event, there is no evidence that any of the 28 families ever gained title to the homes from Jordan or UNRWA. They were tenants paying rent.

Speaking generally, the Jordanian government purchased, or took by eminent domain, much of the Jewish property held by the Custodian, at which point the property being held in trust for the Jewish owner was replaced by the money gained in the transaction. The property in question was no longer Jewish-owned, and even after 1967 there is no way for the original Jewish owners to regain rights to such property, such as the previously mentioned Dheisheh Refugee Camp and Jordanian government buildings. The Jewish owners were only able to file for compensation from the Israeli Custodian who took over for the Jordanian Custodian.

In contrast to this, the land in Sheikh Jarrah was exceptional as it continued to be held in trust for the Jewish owners by the Jordanian Custodian, and then by the Israeli Custodian after 1967.

Is the Land Really Jewish Owned?

The Jordanian Custodian took the land in Sheikh Jarrah after 1948 because it was Jewish-owned, and in the next 19 years no one in the West Bank or Jordan disputed the fact that it was Jewish-owned land. While in recent years some Palestinians have come forward claiming to be the rightful owners of the land, their silence for so many years, especially when the land was first taken by the Jordanian Custodian, makes their claims extremely dubious, and Israeli courts have consistently found against them.

Israeli Government Not Expelling Anyone

Once the Jewish claimants proved their ownership to the Sheikh Jarrah land in court, they also did not try to evict the Palestinian families – they merely informed them they would have to pay rent.

Perhaps under pressure from the PLO, along with monetary inducements, most but not all of the tenants soon renounced the agreement and once again claimed they owned the units and refused to pay rent.

Property left behind by Arabs who fled during the fighting in 1948 (i.e., absentee property) was turned over Israel’s Custodian of Absentee Property, which sold most of the property to state or related bodies for public purposes, such as housing the hundreds of thousands of Jewish refugees from Arab countries who found refuge in Israel. The Custodian held the value of the property in trust for the registered Arab owner (with adjustments for inflation and interest).

Those registered owners are eligible to file for compensation from the Custodian, but Palestinians were pressured not to make claims, lest that legitimize Israel’s existence and sovereignty. Still, over the years at least 14,692 claims have been filed, claims have been settled with respect to more than 200,000 dunums of land, more than 10,000,000 NIS (New Israeli Shekels) has been paid in compensation, and more than 54,000 dunums of replacement land in Israel has been given in compensation. Israel has followed this generous policy despite the fact that not a single penny of compensation has ever been paid to any of the more than 500,000 Jewish refugees from Arab countries, who were forced by the Arab governments to abandon their homes, businesses and savings.

Critics of Israel charging unfairness or “asymmetry” in application of absentee property laws might want to consider that asymmetry first.

This article originally appeared on Camera.org. Click here to support their vital work.

Alex Safian is the Associate Director and Research Director of CAMERA. His articles have appeared in the Wall Street Journal, the Boston Globe, the San Diego Union Tribune, the Jerusalem Post, NewsMax.com and National Review Online, Middle East Quarterly and other newspapers and academic journals. He has lectured widely on media coverage of the Middle East and related issues. Safian is the author of the monograph "PBS and Israel: A Pattern of Bias - The Case of Journey to the Occupied Lands" and testified before an appropriations subcommittee of the US Congress regarding bias in PBS and NPR programming.

The Truth About the Peace Process

Moral Clarity and the Middle East

Oslo: Ten Years Later
How I Learned to Love the Multiverse
10 Big Jewish Inventions
A Journey through Jewish Sicily
Comments