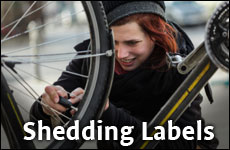 If I could fix a bike, who knows what else I’m capable of doing but have been too afraid to try.

A few weeks ago, my son Shloimy came running inside. “Mommy, my bike is broken. You told me you’d take it in to be fixed already last Sunday.”

My six year old looked at me with his teddy bear eyes and I melted.

“Oh sweetie. I wish I could take it right now. But I don’t have a car and I can’t get it there and blah, blah, blah, blah.” I could tell that the only word that mattered to Shloimy was “no.”

I looked into his eyes. “Honey, you can’t just become a bike fixer.”

He looked at me, his expression indignant. Then he spun around on his heels and started running. “I’m going to get you tools!” he called over his shoulder.

Shloimy returned with a bike pump. He wrestled with his bike and his tire and he tried to fill it with air but he was unsuccessful.

“Okay,” I said, getting down on the ground outside our front door. “I’ll try.” I played with the part-which-I-can’t-even-name and I hooked it on to the bike-pump-thingee and suddenly I felt the tire firming up.

Shloimy danced a little jig. When I finished he tried to ride his bike. But the seat was way too low for him.

“I don’t want to grow if my bike isn’t going to fit on me anymore,” he grouched.

“Maybe I can adjust the seat,” I said. I looked at the seat. All I had to do was loosen a few screws. The bolts on those screws were rusty and didn’t look like they were moving anywhere. But there was a spray my neighbor had that dealt with rust, wasn’t there?

“Go next door and borrow a small wrench,” I told Shloimy. “And ask them if we can borrow their WD-40 spray. Then go inside and bring me a hammer. Okay?”

Related Article: Keep Your Eye on the Expert

He was already running. Moments later he was back with all the equipment. At this point I was lying on the ground next to the bike on our porch.

“Wrench,” I told Shloimy. He handed it to me.

I sprayed and twisted and turned and banged that seat up until that bike fit Shloimy just perfectly. I was so proud.

“Now get on and ride,” I told him. He danced another jig and got on the bike. But something was still wrong.

“The pedals aren’t moving,” he said.

“Oh.” After all that. I was devastated.

But seats and tires were one thing. Any amateur could do that. Pedals and chains were the real McCoy. I needed to be super bike lady to do that.

But hadn’t I figured out the other things? My confidence brimmed.

I sat next to the bike and turned it upside down like I’d seen them do at the bike shop. The chain wasn’t aligned properly. And it definitely needed some WD-40 to loosen it up. It was all pretty self explanatory. The pedals can’t push around a rusty chain, especially when it’s not aligned properly. Right?

I oiled the chain and got it back on track. And the problem with the wheels didn’t take a rocket scientist to figure out.

I was practically floating by the time I saw my Shloimy riding on that bike.

Floating. And gloating. I did it! One step at a time.

And it got me thinking. What other undeveloped strengths might I harbor?

Lately I’ve been getting some interesting phone calls.

My response has always been the same. “Me? I’m not a speaker. I’m can’t deliver inspiring messages. I should be in the audience, not at the podium.”

We don’t really know what we are capable of achieving until we embrace the challenge and try.

But the people who know me well have been pushing me. “Yes you are Yael. Stop turning people down. This is the direction God is pushing you in right now. It’s time to move forward, one step at a time.”

So I started taking them up on their offers. And the results have inspired me. I never saw myself in this role, but God knows better than I do. I’m learning things about myself that I never knew before.

During the Ten Days of Repentance, we need to have the confidence that we can step outside of our comfort zones and become more than the way we have defined ourselves up until now. We don’t need to limit ourselves by labels, perhaps even decades old, that we have given to ourselves or that others have tagged us with.

Because we don’t really know what we are capable of achieving until we embrace the challenge – one step at a time.

Winning the Internal Battle
Vayelech 5783: Regret and Repent
Rabbi Sacks: Focus On the Important, Not the Urgent
Put Your Foot Down: Are Human Feet Poorly Designed?
Comments
MOST POPULAR IN Spirituality
Our privacy policy
Aish.com Is Looking for Great Writers