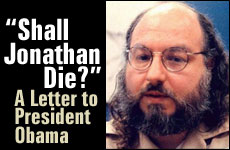 I add my voice to the many who are calling on you to commute Jonathan Pollard’s sentence.

Divine providence, acting through the American people, has appointed you to the most exalted office in the world: President of the United States. You stand at the head of the most powerful nation in the world whose strength is measured not only by its political, economic and military might, but also by its spiritual power as the flag bearer of liberty and freedom.

At the eastern port of entry to the United States stands the Statue of Liberty, which symbolizes for all who enter her gates the longed-for national calling card, the yearning for freedom of all mankind.

In the chronicles of history, the brilliant personalities of George Washington, Abraham Lincoln and the visionary Martin Luther King, Jr. stand out. Their character and their fight for independence, liberty and equality light the way for your feet in forging another link in this illustrious chain.

My dear President, it is 28 years (nearly 10,000 days) that Jonathan Pollard has been incarcerated in an American prison. He was sentenced for a serious offense, passing classified information to a foreign country, albeit a friendly nation, the State of Israel.

Those who were responsible for this affair have admitted their guilt and expressed honest and deep remorse for this serious breach, even if it were done with the intention of protecting the security of Israel.

Despite the admissions and the remorse, Jonathan continues to remain in jail for a period of time unparalleled in its harshness – and for which there has been no precedent in American history. In addition to the fact that the man is serving a disproportionately severe sentence, it is well known that his health is failing and his life expectancy is diminishing.

In the book of Samuel I in the Bible, Chapter 14, the People of Israel cry out: “Shall Jonathan die?” This outcry which refers to Jonathan, the son of King Saul, screams from the chambers of my own heart with regard to Jonathan Pollard, that he should merit to leave prison alive, and perhaps even be blessed with the most basic right which has been denied him up until now, fatherhood.

Honored President, after the requests of the president of our country, Shimon Peres, and our prime minister Binyamin Netanyahu, and thousands of Israelis – as well as those of exalted American leaders such as secretaries of state, Henry Kissinger and George Shultz – I too add my voice to the many who are calling on you to hear and to respond positively to commute the sentence of Jonathan Pollard, who seeks only to live out the remainder of his life with his wife Esther in the State of Israel, which has granted him citizenship.

Your taking this action, Mr. President, shall be engraved upon the hearts of freedom-seekers throughout the world as a gesture worthy of being included in the chronicles of humanity.

Prime Minister Netanyahu, President Peres, the leaders of every major political party in the Knesset, and U.S. government officials, legal professionals, and religious groups have all called for Pollard's release, as has the Conference of Presidents of Major American Jewish Organizations.

As part of the "Call for Clemency Campaign," people across the United States are encouraged to call President Obama and request the release of Jonathan Pollard, telling the White House that 28 years in prison is more than enough.

Yisrael Meir Lau is the Chairman of Yad Vashem and Chief Rabbi of Tel Aviv. He previously served as the Ashkenazi Chief Rabbi of Israel. His father, Rabbi Moshe Chaim Lau, was the last Chief Rabbi of the Polish town of Piotrkow. At age 9, Rabbi Lau was the youngest person liberated from the Buchenwald concentration camp, and he came on the first boatload of Holocaust survivors to Israel. He is the author of numerous books, including a Holocaust memoir, "Do Not Raise a Hand Against the Boy." He is the recipient of the Israel Prize for lifetime achievements to the State of Israel.

Struggle for the Scrolls

Asking God for Life on Rosh Hashanah: A Video Message from Rav Yitzchak Berkovits
It Takes A Lot Of Faith To Be An Atheist
How Instagram Brought Back This Nostalgic Soup
What Makes Eli Run?
Comments
MOST POPULAR IN Israel
Our privacy policy