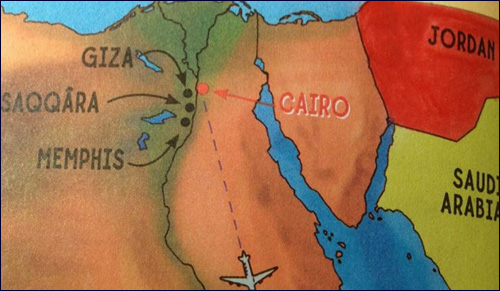 Such a mistake should be unthinkable to make in the first place.

Scholastic Books, publisher of the Harry Potter series, and the world’s largest publisher of children’s titles, is stopping all shipments of its book Thea Stilton and the Blue Scarab Hunt. This will give them time to reprint the books, they’ve explained, which omitted Israel from a map of the modern Middle East.

The company scrambled into action after an Israeli newspaper contacted them: a reader in Jerusalem had complained, noting there was no Israel on the map at the beginning of this popular children’s adventure. Instead, Israel is labeled as part of Jordan.

The book, originally written in Italian by Elisabetta Dami and first published by Edizioni Piemme in Italy in 2009, has been available in English from Scholastic since 2012. It’s a well-written, educational story: it concerns a mouse and her friends who go on a treasure hunt, learning about ancient Egypt, archeology, and picking up new vocabulary along the way.

My kids have enjoyed some of the books in the Thea Stilton series; their Jewish school even stocks some of the series’ books in the school library, though they don’t seem to have spotted the Blue Scarab Hunt volume. Curious, I checked it out from our local public library (which stocked a dozen of them – it’s a very popular title). There it was: a full-page map at the beginning, setting out the geography of the Middle East for young readers – with Israel’s neighbors like Egypt, Saudi Arabia and Jordan clearly marked, but Israel completely erased from the picture.

Given the book’s overall high quality and educational content, though, it’s all the more surprising that a map with Israel erased from the region would be able to go through the editing process without anyone spotting this glaring mistake. Clearly, the editors at Scholastic are experienced at publishing high-quality children’s literature. That a map omitting the Jewish state could get past their review perhaps shows how commonplace it’s become to doubt Israel’s very existence.

In 2010, I was shocked to receive my copy of Connect, the alumni magazine of the London School of Economics, and see that – accompanying an article announcing the creation of a new Middle Eastern Research Center – was a map of the region in which Israel’s neighbors were identified, but there was no mention of the Jewish state.

A similar apology was forthcoming in 2013, when a British teacher complained that a popular English as a second language textbook in the UK contained a map in which all of Israel was mislabeled “Occupied Palestine”. Garnet Education, which published the book, also apologized, calling the mislabeling a “genuine mistake”.

Sometimes its erasure is no mistake. A 2013 study by the US State Department found that 96% of textbooks used in Palestinian schools failed to identify Israel on maps. This makes it much harder for the region’s children to grow up with a realistic view and acknowledge that Israel’s existence is a fact that can’t be wished away.

Academia isn’t the only sphere in which otherwise smart people seem to be making big mistakes when it comes to identifying the Jewish state on maps and in books. It happens in the worlds of business and politics as well.

In 2002, German car maker BMW illustrated its Middle East dealers’ website with a map that failed to identify Israel (even though Israel’s Arab neighbors were clearly labeled). In that case too, BMW quickly apologized after receiving complaints from outraged customers, and corrected its website, claiming that Israel’s omission was the result of error.

And in 2013, the Association of South African Engineers signed a cooperation agreement with the Palestinian Engineers Association: they sealed their deal with a photo op in front of a map – with all of Israel mislabeled as Palestine, and the name “Israel” nowhere to be found. A mistake?

At the official launch of two German-funded UN projects in southern Lebanon in 2013, Ann Dismorr, a UN official in Lebanon, posed with a map that erased Israel, mislabeling it “Arab Palestine” instead. She later denied the photo op, although it was published in area newspapers.

We all make mistakes, but when one error is repeated so often, it can make one wonder – just how much of a mistake is it? In a world where Israel’s very existence is too often threatened, erasing it from maps is an intolerable mistake that educated people should not make. It’s gratifying that companies and schools are quick to apologize, but it would be better for all of us if such a mistake would be unthinkable to make in the first place.

The Everlasting Jewish Connection to the Land of Israel

Are Israeli Settlements Legal?
How I Learned to Love the Multiverse
10 Big Jewish Inventions
A Journey through Jewish Sicily
Comments