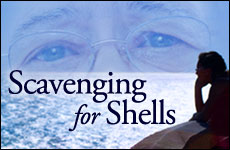 Death is like a tsunami, threatening to sweep away everything in its path.

My mother began holding court from her hospital bed just a few days after she learned she would soon lose her 11-year battle with ovarian cancer. Sallow, frail and doped up on painkillers, she greeted parades of somber admirers, including an entourage from Italy and throngs of adoring Tai Chi students, in her red satin kimono and rhinestone-studded, gold medallion necklace, which hung on her chest like an Olympic medal. My aunt photographed the whole procession with her cellphone, posting the snapshots on a website she dubbed, "A Celebration of Life." My 61-year-old mother performed for the camera with the effervescence of a child at a birthday party, striking poses in her silk bathrobe and IV, sticking out her tongue at the hospital Jello, and snuggling up to family and friends.

On one such afternoon, my mother summoned me from the hospital waiting room where I sat nervously fiddling with my laptop. When I walked in, she invited me to cuddle with her while she napped. As I crept into her bed, wedging myself between the metal guard and her delicate frame, she wrapped her wraith-like arms through mine and rested her warm, oval head on my shoulder. At 36, I marveled at how much I still hungered for the womb-like comfort of my mother's embrace.

As I futilely tried to rest, I turned my attention to the Discovery Channel, which was running a special documentary on tsunamis. It was December of 2004, and a killer wave that had just swallowed miles of coastline in Asia. Strangely, the tsunami had been a welcome distraction for my mother as she transitioned from hospital to hospice care. She had always been fascinated with natural disasters and "extreme weather" -- tornadoes, hurricanes, volcanoes and earthquakes -- natures' indifferent shrug at man's sense of control. My mother bragged on several occasions that her children were born in thunderstorms and the first snowfall of the season, as if the timing of our births conferred some special status, perhaps even a conspiracy with a higher power. Now, the irony was palpable. As I watched images of unsuspecting vacationers flee for their lives from the safety of my mother's arms, I feared that I would be swept away and adrift without her.

A few weeks earlier, my mother had checked into Northern Westchester Hospital for what she thought was a brief pain management visit. But instead, she had a bowel blockage that nearly killed her. The nurses, alarmed and understaffed, frantically paged the oncologist, who stormed in two hours later looking cross, and pulled my family into the waiting room like a parent about to scold a child. We were still wondering how long the latest attack would delay my mother's next chemotherapy treatment. But the doctor was losing patience. Didn't we understand there was nothing he could do anymore? "Your mother is going to die very soon," he said bluntly. And while my mother's increasing weight loss, exhaustion and pain had already begun to erode our collective faith in her immortality, the doctor's words seemed to come of out nowhere, crash through our defenses, and sweep us all away.

Love was at once the raft, the anchor, and the sea in which I swam.

For the next two months, I split my time between my mother's care and my job at a large philanthropic organization. By this time, the world was tuning in to scenes of devastation in the tsunami's aftermath. As I watched my colleagues rally to send relief to survivors half way around the world, I could only tread water, riding out many waves that threatened to pull me under -- the sense of agony and helplessness every time my mother moaned or cried out in pain, the hope when she held down the tiniest morsel of food, outrage at the insurance company that refused to pay for hospice care at the local hospital, the sweetness of our last mother-daughter exchanges, and the weariness I felt as my family fell apart, then rallied, then scattered. Love was at once the raft, the anchor, and the sea in which I swam.

My mother slipped away after several days in a coma while under hospice care at the Hebrew Home for the Aged. Camped out in her room, counting the seconds between breaths -- seconds that seemed to stretch out like the biblical days of creation -- I watched life wash over her in three gentle waves: a short breath in, a long sigh out, and a tear that surprised me as I bent to kiss her. In that final misty moment, I did the only thing I could do -- I sanctified the ocean. Invoking the ancient Jewish ritual for escorting the dead, I cried, "Shema Yisrael Hashem Elokeinu, Hashem Echad" -- Hear O Israel, the Lord our God, the Lord is One. I declared my powerlessness in the face of elements unseen and tasteless, yet capable of penetrating rocks, of swallowing lives and matter, of nourishing fields and purging a broken heart, all emanating from a singular source. I was both humbled and devastated.

According to the Kabbalah, when human beings die, the purist part of their soul reunites with the Infinite, ocean-like Source, while their good deeds live on as waves, distinct ridges and swells moving along the surface of life. Today, when I close my eyes and breathe deeply, I can begin to imagine the deepest reaches of silence, a peaceful and loving place, and I wonder if my mother is there, suspended in the mist, moving across the surface of my life in gentle ripples. The thought of my mother as a wave offers some solace, but not enough. Can a wave sweep long wisps of hair from my eyes, or make me feel safe and special as I curl up in its arms like a newborn?

Though I try in vain to fill the void with distractions, I inevitably become a beachcomber, sifting through piles of colored socks, antique jewelry, scarves, and sentimental tchotchkes that may have once held special meaning, but are now shells and bones. So I salvage the rhinestone medallion and hang it on my bathroom mirror, unearth the red satin kimono which still looks imperial even after the collar got ruined in the laundry, and plumb the expressions of the women in my mother's paintings, hoping they will reveal a secret, or possibly wink back. And, like a good daughter, I adorn her grave with fragments of the world she left, her beloved "bones of the earth."

But in the end, when the tsunami has crested, the waters have receded, and the land has dried, what remains are empty stretches of beach, scattered shells and shared ocean.

Kim Schneiderman is a Licensed Clinical Social Worker, an experienced therapist, a freelance journalist, and a consummate seeker. She currently resides in Riverdale, and writes full-time for a large Jewish philanthropic organization.

A Gift from the Coast of Nowhere

Thank You for Assateague Island
The Blue Beyond
Great Place to Live
Is Eating Supposed To Be Spiritual?
Comments
MOST POPULAR IN Spirituality
Our privacy policy