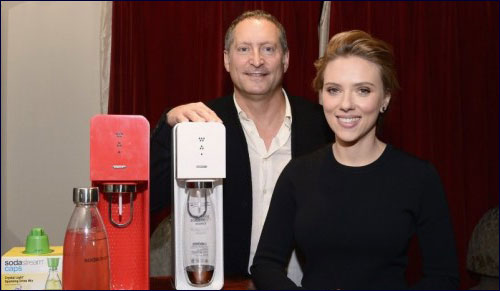 The hypocrisy of the BDS is now fully exposed.

It has long been suspected that the BDS movement (Boycott, Divestment, and Sanctions) – which charges Israel with practicing Apartheid against the Palestinians – is less “pro-Palestinian” and more an expression of blind anti-Israel hatred.

In the latest campaign – directed against SodaStream, the Israeli maker of home soda machines – BDS activists are staging protests at stores that sell SodaStream and urging investors to sell their shares.

More specifically, BDS is pressuring actress Scarlett Johansson to end her endorsement as SodaStream's global spokesperson – a deal that culminates next week in a high-profile Super Bowl ad.

The alleged BDS objection: A SodaStream factory in the West Bank town of Ma’aleh Adumim, which – as reported in Al Arabiya – gainfully employs 900 Palestinians who work side-by-side with Israelis, share a dining hall, and earn wages and benefits equal to what the Israelis are receiving.

This sounds less like “apartheid” and more like an excellent way to build bridges of peace. Yet BDS is not deterred by these pesky facts.

The BDS pressure against SodaStream raises a larger question: Who will be hurt most by this campaign? If the Ma'aleh Adumim plant closes, the Israeli owners can easily switch production to one of the company's other 20 plants.

The ones to be hurt most are the Palestinian workers who will lose their jobs.

We ask: By what self-righteous justification do BDS activists threaten the livelihood of 900 Palestinian families – working at SodaStream of their own free will and earning four times the wage they could get from a comparable Palestinian employer?

The BDS activists claim to be pro-Palestinian. But this entire movement has the stench of blind hatred of Israel.

Scarlett Johansson – despite the intimidation of BDS advocates and their characterization of SodaStream's carbonation as "blood bubbles" – has courageously refused to back down. Though the controversy could negatively impact her public image, she has taken a principled stand. We hope more voices of truth will follow her footsteps.

While I never intended on being the face of any social or political movement, distinction, separation or stance as part of my affiliation with SodaStream, given the amount of noise surrounding that decision, I'd like to clear the air.

I remain a supporter of economic cooperation and social interaction between a democratic Israel and Palestine. SodaStream is a company that is not only committed to the environment but to building a bridge to peace between Israel and Palestine, supporting neighbors working alongside each other, receiving equal pay, equal benefits and equal rights.

That is what is happening in their Ma'ale Adumim factory every working day. As part of my efforts as an Ambassador for Oxfam [the international human rights group outspoken in support of Palestinians], I have witnessed first-hand that progress is made when communities join together and work alongside one another and feel proud of the outcome of that work in the quality of their product and work environment, in the pay they bring home to their families and in the benefits they equally receive.

I believe in conscious consumerism and transparency and I trust that the consumer will make their own educated choice that is right for them. I stand behind the SodaStream product and am proud of the work that I have accomplished at Oxfam as an Ambassador for over 8 years. Even though it is a side effect of representing SodaStream, I am happy that light is being shed on this issue in hopes that a greater number of voices will contribute to the conversation of a peaceful two state solution in the near future.

Addendum: On Wed, Jan. 26, Scarlett Johansson made another principled decision: she is ending her relationship with Oxfam.

Johansson’s spokesman said the actress has “a fundamental difference of opinion” with Oxfam International because the humanitarian group opposes all trade from Israeli settlements, saying they are illegal and deny Palestinian rights.

“Scarlett Johansson has respectfully decided to end her ambassador role with Oxfam after eight years,” the statement said. “She and Oxfam have a fundamental difference of opinion in regards to the boycott, divestment and sanctions movement. She is very proud of her accomplishments and fundraising efforts during her tenure with Oxfam.”

Kol hakavod to Scarlett for taking a such a strong stance and not bowing to increasing pressure. Her commendable actions have generated a greater type of publicity for Soda Stream than any Super Bowl commercial would have done.

Video of the SodaStream Factory

This video, created by Standwithus.com, shows how the SodaStream factory in the West Bank – where Arabs and Jews work together – helps build bridges of peace.

Freedom for Israel's MIAs and POWs

Why I Admire Israel
The Promise Of The Land
Which Chat Are You On?: Parshas Behar/Lag Ba’Omer
Do You Like Slow-Cooked Food? Thank the Jews
Comments
MOST POPULAR IN Middle East
Our privacy policy