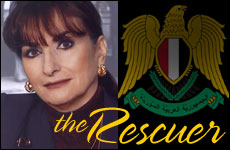 The amazing true story of how one woman helped save the Jews of Syria.

In 1972, Toronto high school music teacher Judy Feld Carr came across a news article in the Jerusalem Post that told of the tragic deaths of 12 young Syrian Jewish men who ran across a minefield while attempting to flee Syria across the Turkish border.

"I saw the article and I couldn't get over it," Carr recalled in a phone interview with the Post 34 years after that fateful publication. The daughter of an independent-minded fur trader from Sudbury, Ontario, she could not sit helpless while Syria's Jewish community suffered. "So my late husband and I decided we had to do something about it." And she did. Spectacularly. Over the next 28 years, Carr masterminded from her Toronto home an international smuggling operation, complete with elaborate secret codes, meetings overseas with foreign agents and extensive bribes for Syrian officials, which rescued 3,228 Jews from persecution.

Much of Carr's work remains secret. "Even today, more is hidden than known, and we still cannot expose in detail many of [Carr's] rescues," noted a recent article in IICC Magazine, the journal of the Israeli Intelligence Heritage and Commemoration Center. Edited by former senior IDF intelligence officer Brig.-Gen. (res.) Ephraim Lapid, IICC Magazine quoted "foreign sources, who revealed that Carr was involved in the creation of a secret and secure information network with extensive connections," both with "official and secret sources in Israel and private ones in America."

The story began as a local philanthropic initiative. Distraught over the news article, Carr and her husband, Dr. Ronald Feld, organized lectures and a study day on Syrian Jewry. The participants learned of the persecution of Syrian Jews at the hands of the local Arabs and the regime, some of which continues to this day. They learned of the 1947 pogroms in which Arab mobs smashed homes and synagogues in the 2,500-year-old Jewish community of Aleppo; of laws from the 1940's barring Jews from purchasing land; of the Muhabarat (secret police) surveillance of Damascus's Jewish quarter; of the arrest and reported torture of Jews suspected of attempting to leave the country; and of the fact (recently cited in a 2001 US State Department human rights report) that Jews are the only minority in Syria whose religion is denoted in their passports and identity cards.

But, once they understood the problem, "we didn't know what to do," Carr said. "So we decided to do what we knew best from [campaigning for] Russian Jewry. We decided to call Syria." It took almost three weeks ("We were about to give up.") and the help of a Moroccan Jewish phone operator in Montreal to finally get a phone call through to Syria. "The Syrians would shut the line to Canada as soon as we asked for a Jew," Carr recalled.

12-min Interview with Judy Feld Carr, from CBC's "The Hour" [Article continues below]

She finally reached the home of a Jewish woman who was on the payroll of the Muhabarat. Luckily, the woman's husband was the only one home at the time, and though the call from Canada "almost gave him a heart attack," he divulged the name and address of Rabbi Ibrahim Hamra, who would become the Chief Rabbi of Syria.

Following that initial gambit, Carr and her husband "knew we couldn't call again, and it wasn't a good idea to write a letter. So we came up with an idea to send a telegram in French [which is widely spoken in Syria] asking if Rabbi Hamra needed religious books. We prepaid the answer." Ten days later came the response, a veritable shopping list of Jewish books. And so began Carr's communication with the Syrian Jewish community.

Though her husband died suddenly of a heart attack in 1973, leaving her alone with three children, Carr maintained and strengthened her fragile contact with Syria's Jews. When, in 1977, she married Donald Carr, he became her confidant and supporter, and one of only a handful of people around the world who knew about her clandestine activities.

Toronto's Beth Tzedec synagogue, the largest in Canada, established the Dr. Ronald Feld Fund for Jews in Arab Lands, and Carr used donations to this fund to finance her work. "We had no overhead, no executive directors, no salaries. We didn't have dinners, cocktail parties, fundraising," she recalled. "We only printed thank-you cards." Even so, she said, she received quiet financial help from Jews throughout North America. "It spread by word of mouth across Canada from British Columbia to Newfoundland. Then there was a fund in Baltimore that sent their money," she said.

At its outset, the fund "was only a link to the rabbi in Damascus, and later on to rabbis in Allepo and Kamashili," the only three towns in Syria where Jews were legally permitted to reside -- and even then restricted to ghettos, forbidden to own cars or to travel. "The rabbis wanted books, tefillin (phylacteries), tallisim (prayer shawls)," Carr related.

Soon, the telegrams and Judaica shipments became a code.

"I started inserting words into the telegrams, like 'who's in prison?'" she related. "Then the rabbi would answer with a name, hidden inside my address."

In order to verify that the rabbi had received the books, Carr would write one verse of psalms inside a book, and Rabbi Hamra would reply with the next one. Eventually, the verses became a way of discussing events, and Carr began to receive updates and news from the community. As the code developed it took on additional elements, including terms taken from Chinese cooking and alcoholic beverages. Carr herself was codenamed "Gin."

The operation was expanded to Aleppo when another Toronto woman, Hanna Cohen, whose brother was a rabbi in Aleppo, decided to visit him, "taking her life into her hands." Carr recalled that Cohen was arrested and interrogated, but then returned to Canada. She carried with her, hidden in her clothing, a letter for Carr "from the rabbis in Aleppo begging for books and begging to get out of Syria."

And so, the network grew steadily. Through Syrian Jews who had escaped to Canada on their own, Carr slowly developed a network of contacts in and outside Syria. She communicated with Syrian government functionaries, judges and even Muhabarat officers, all of whom were brought together by the knowledge that there was money to be made in "selling Jews" to Judy Carr.

Carr had operatives in and Syria, Turkey and Lebanon to ferry Jews safely to Israel or elsewhere.

She used this network to "to ransom the Jews and to pay off people on the escape route and negotiate prices." She funneled bribe money to Syrian officials through third parties and negotiated the Jews' release personally. Over time, with the cooperation of Israel's secret services, Carr had operatives moving in and out of Syria as well as ready in Turkey and Lebanon to collect escaping Jews and ferry them safely to Israel or elsewhere.

One of Carr's most interesting stories concerns not Jews, but an ancient and priceless Keter, or Bible manuscript. The Damascus Keter, produced in Burgos in northwestern Spain in 1260 and taken to Muslim lands by Jews fleeing the Spanish Inquisition, was smuggled out of Syria by one of Carr's agents, hidden in stacks of documents. Today it resides in Israel's National Library in Jerusalem.

All the time that Carr worked covertly to rescue Syrian Jews, she publicly lobbied Canadian officials, diplomats and Jewish organizations, never revealing her activities. All of them underestimated the woman with whom they were dealing, considering her an amateur activist tackling issues beyond her ken.

"I never had any publicity. It had to be a totally secret operation," she said. "The world media doesn't look at Canada except for the weather report, so no one knew what I was doing." That changed in the late 1990's.

Yitzhak Rabin thanked her for her "hard and dangerous work."

In 1999, University of Toronto historian Harold Troper turned Carr's story into a book, The Ransomed of God: The Remarkable Story of One Woman's Role in the Rescue of Syrian Jews [re-released in paperback in 2007 as "The Rescuer"]. In May 2001, she was invested into the Order of Canada, the country's highest honor. Her story was "one of international drama and suspense," according to the office of Canada's Governor General, which awarded her the honor and praised her for her "selfless concern for others." She has also been recognized, albeit less prestigiously, in the Jewish world. The late prime minister Yitzhak Rabin thanked her for her "hard and dangerous work" in a 1995 letter, adding that Israel and Syrian Jews "will never be able to reward you as you deserve." She is also the recipient of the Simon Wiesenthal Award for Tolerance, Justice and Human Rights.

But Carr, now a grandmother of 13, shies away from the publicity. Most of those she rescued don't know the identity of the person who, from far-away Toronto, cleared their path to freedom.

"I've been to a few Syrian weddings and bar mitzvahs in Israel and Brooklyn," she said with embarrassment. "I don't like the kavod [honor], because they make me go under the chuppah (wedding canopy), and then they see who I was and that's not necessary. It's not necessary." Carr remains in touch with the rabbis of the communities, and with those she rescued from inside Syrian prisons and helped to flee to North and South America and Israel.

"I gave a speech in Sao Paulo [Brazil] before Rosh Hashanah," she related, "and people there stood up and said, 'Judy, don't you know me? You took me out on the escape route.'" One of them was a Sephardi rabbi who carried with him a prayer book inscribed with Carr's handwriting.

"He apologized because he knew my rules [forbidding carrying religiously identifiable objects on the escape route]," she said with pride, "but he said he put it in his pocket when he left, and it has brought him good luck."

Is Criticizing Israel Antisemitic?
Faith: the Axis Upon Which the Wheel of Science Turns
Love - Not Just About Chemicals Anymore!
Is There a Moral Code in a Virtual World?
Comments
MOST POPULAR IN Israel
Our privacy policy