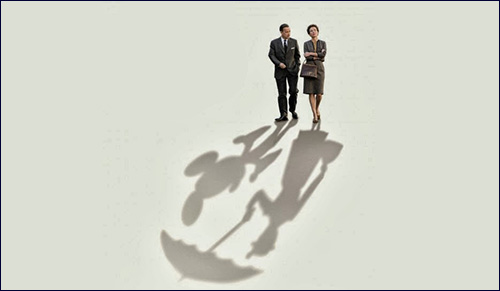 For Walt Disney, things didn’t always go so smoothly even in his own “Magic Kingdom.” For example, it took him nearly 20 years to fulfill a promise to his daughter and make a movie based on the popular Mary Poppins books that his daughter adored. That’s because the author, P.L. Travers, was a tough and cantankerous woman who abhorred the very idea of her work being “Disneyfied,” and refused the mogul’s repeated offers to buy the rights to her work.

In the new movie, Saving Mr. Banks, Travers finally buckles due to insurmountable financial troubles. Based on a true story but with a fair amount of dramatic license, the movie recreates the combat between Travers and Disney’s creative team: screenwriter Don DaGradi (Bradley Whitford) and songwriting brothers Richard and Robert Sherman (Jason Schwartzman and B.J. Novak), as well as Disney himself, as they scripted the movie. (In real life, Travers had already signed a contract when she came to California to meet with the team, but in the movie, she is shown as only agreeing to a two-week collaboration.)

Disney flies her from London to Los Angeles, prepared with his charm offensive. He knows he’ll need it, since Travers seems to chew nails for breakfast, her personality coiled as tight as the curls in her hair. “I won’t have her turned into one of your silly cartoons,” she insists during their first meeting about the Mary Poppins character. “You don’t understand what she means to me.”

"The last thing I would do is tarnish a story I love," Disney tries to reassure her.

Still, Travers proceeds to drive Disney and his talented team nuts, fighting them on almost every issue, such as the casting of Dick Van Dyke as opposed to a “serious” actor, and the idea of the movie as a musical. “Mary Poppins does not sing,” she pronounces archly. She also bans the color red from the movie, just because she can.

No wonder that Walt Disney needed more than a spoonful of sugar to make this bitter pill go down, and is shown occasionally downing some Scotch, using mild expletives, and smoking. Some Hollywood insiders expressed surprise that the tightly controlled Walt Disney Studios, which produced the film, was willing to show Walt Disney with as a real man and not an idol, even admitting the fact he did not invite her to the movie premier. (She showed up anyway.)

The movie also pokes gentle fun at the treacly stereotype of all things Disney. When Travers is shown her suite in the posh Beverly Hills Hotel, she is appalled to find it stuffed to the point of claustrophobia with balloons, fruit baskets, and an army of plush toys of Mickey Mouse, Donald Duck, and other Disney characters. Travers, who seems to have had a humorectomy earlier in life, is horrified, and begins shoving the toys into a closet. She turns the largest stuffed Mickey Mouse, about the size of a robust six-year-old, to face the wall, as if it is in time-out.

“You can stay there until you learn the art of subtlety,” she says.

Director John Lee Hancock, who also directed The Blind Side, credits Disney for being smart enough and brave enough to realize that a human Walt was not only a better character, but was easier to love,” as he told the New York Times in an article published October 13. Tom Hanks is superb as an affable but shrewd Walt Disney, not so patiently trying to overcome Travers’ irrational demands, but of course, eventually winning her over with his own confessions of childhood hardships, particularly of a father who disappointed him, too.

While “Saving Mr. Banks” is focused on the making of Mary Poppins against the odds, there is also the backstory of Travers’ troubled childhood in Australia, shown in many (to this viewer, too many) flashbacks. The title of the movie refers to Travers’ father, Travers Robert Goff, on whom the character of Mr. Banks in the Mary Poppins books was based, and the author’s efforts to preserve her image of him as a loving, even whimsical man, though his alcoholism and irresponsibility doomed him personally and professionally. Travers is unable to let go of this image. She also cannot let go of the image of the real-life Mary Poppins, based on her stern and unloving aunt, who cared for the family during its darkest hours. The flashbacks show the author as a child who adores her father despite his fatal flaws, a child who ultimately blames herself for not having been able to save her father from himself. Without these flashbacks, the character of P.L. Travers would have been irredeemably unsympathetic.

Like Oscar winners The Artist and Argo, this is a movie about the inside workings of the entertainment industry. But it is also a story about the power of storytelling, both the stories we tell ourselves and the power our stories have on others. As Walt Disney reminds Travers, storytellers "restore the past. We bring hope." This is a very Jewish idea.  The Torah is unique in religious literature in that it teaches moral truths through narrative, not through philosophy or myth. We connect to our history through stories of our ancestors, whose lives were dramatic but whose lives are never whitewashed. The greatest of our greats – Abraham, Jacob, Moses, Sarah, Rachel, King David – are shown as real people who have doubts, conflicts, jealousies, and frustrations. Through their human flaws their greatness looms larger.

Maybe this is one reason why Jews are famous story tellers and writers; we connect with our past through our oral history, but we don’t stay mired in the past. Our faith gives us hope in the future, and the knowledge that one day, we will understand the past. The film also shows how P.L. Travers cannot forgive herself for her imagined failures of the past. Judaism understands and encourages forgiveness, even of ourselves. Too bad Travers never knew the catharsis that came with some well-timed and earnest “Al chets” and “ashamnus” during Yom Kippur.

Amare Stoudemire's Jewish Roots
It Takes A Lot Of Faith To Be An Atheist
How Instagram Brought Back This Nostalgic Soup
What Makes Eli Run?
Comments
MOST POPULAR IN Jewlarious
Our privacy policy