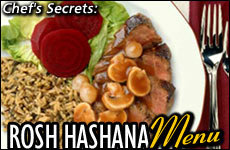 Rosh Hashana. The days are cooler, kids are back in school and this year we need to prepare seven meals. Well, it's a good time to implement change into my life. A time to be more organized, more calm, and better prepared than other years. And I cannot forget to be thankful and joyous -- a truly difficult task, but a great time to start.

First, just a reminder: It's traditional that we begin the evening with special foods that have a symbolic allusion for good. Next reminder: It's also traditional to stay away from using nuts, bitter or especially spicy flavorings like lemon, dill, hot pepper and horseradish, in order to have a sweet year.

I went through all of my recipes and pulled out all the ideas I think would be appropriate to use. Fun foods, old faithfuls, new ideas and recipes I haven't used in a while. I put them in order, combining which recipes complement each other and then dividing them into seven complete meals, keeping in mind diversity, ease of preparation, what can keep well, reheat well, as well as which ones can be made in advance and frozen.

Order and purchase early and make a schedule of preparation.

Good luck, and may you have a good and sweet year!

Smoked salmon enhances this innovative version of a classic. Potato stands in for half of the yolks to cut fat and cholesterol.

Dip fish pieces, 1 at a time, in egg mixture, letting excess drip off, then dredge in bread-crumb mixture, shaking off excess. Transfer to a sheet of wax paper, arranging fish in 1 layer.

Heat 2 tbsps. oil and 1/2 tbsp. butter in a 12-inch non-stick skillet over moderately high heat until hot but not smoking, then fry 2 pieces of fish, turning over once, until golden and just cooked through, 4-5 minutes total. Transfer to a baking sheet and keep warm in oven, then cook remaining 2 pieces of fish in remaining 2 tbsps. oil and 1/2 tbsp. butter in same manner. Serve fish with remaining lemon slices.

Heat oil in a heavy large skillet over medium-low heat. Add garlic; saute until golden, about 6 minutes. Discard garlic. Increase heat to medium-high. Add mushrooms and parsley; saute until mushrooms are golden, about 8 minutes. Reduce heat to medium-low. Stir in remaining ingredients. Cover and simmer 5 minutes. Season with salt and pepper. Cool to room temperature. Transfer to container; cover and chill until cold. (Can be made 2 days ahead. Keep chilled.) Drain mushrooms before serving.

Jicama [HEE-kah-mah]
(Jicama is often referred to as the Mexican potato, this large, bulbous root vegetable has a thin brown skin and white crunchy flesh. Its sweet, nutty flavor is good both raw and cooked. I use zucchini when jicama is not available.)

In a large pot of boiling salted water, cook long beans until tender but still crisp, about 8 minutes. Drain and rinse under cold running water until cool.

On a round serving platter, mound long beans in center. Arrange jicama around beans and tomatoes around jicama to form a tricolored platter.

Using a salad spinner makes short work of washing fresh spinach, which usually requires several changes of water. Start by filling the spinner bowl with water. Then fill the basket with spinach, submerge it in the water; and stir the spinach to release dirt. Lift the basket out and repeat with fresh water.

Place sesame seeds in heavy skillet; sprinkle lightly with salt. Stir over medium heat until seeds are light golden, about 6 minutes. Set aside.

Wrap towel around spinach and squeeze out as much moisture as possible. Transfer spinach to work surface and chop coarsely. Place in medium bowl. Add sesame oil, vinegar, and hot pepper sauce. Toss to blend evenly. Season to taste with salt and pepper. Sprinkle with sesame seeds. (Can be prepared 2 hours ahed. Let stand at room temperature.)

Stir lemon juice and aquavit into soup. Garnish with arugula.

Heat the oil in a large saucepan over medium heat. Add cumin seeds, and when they begin to pop, add the onion and cook until golden. Add the garlic, carrots, and celery, and cook gently for 10 minutes. Stir in the remaining ingredients and cook 1 minute, then add the lentils.

Pour in the stock. Add the bay leaf and bring to a boil. Reduce the heat immediately and let it simmer for one hour. Remove the bay leaf.

When you serve it, garnish it with fresh onion rings, or finely chopped scallions.

Slice beef while partially frozen, approximately 3 ozs. each. Tenderize with meat hammer. Place filling on slice roll and secure with toothpick. Cook with sauce of your choice.

Fry together for 2 minutes.

Preheat the oven to 400°F. Heat the olive oil in a flame-proof baking dish, and when it is hot but not smoking, brown the turkey sides, which will take about 8 minutes. Remove the pan from the heat. Add the shallots and the onions to season the roast and the vegetables to your liking with salt and pepper. Crush the bay leaf and sprinkle it over turkey roast, along with fresh thyme leaves.

Cover and place on the center rack in the oven. Cook until the roast is firm to the touch and cooked through one hour, checking it occasionally to be sure the onions or shallots aren't sticking to the bottom of the pan, simply add a tablespoon or two of water and continue cooking.

Remove from the oven, remove the cover and let it sit for at least 10 minutes, to allow the juices to retreat from the meat. Slice and serve, with the shallots and onions alongside.

Char peppers over gas flame or in broiler until blackened on all sides. Wrap in paper bag and let stand 10 minutes. Peel and seed chilies; chop coarsely.

Cook potatoes in large pot of boiling salted water until almost tender, about 15 minutes. Drain well. Cover and chill until cold, at least 3 hours or overnight. Cut potatoes into 1/2- to 3/4-inch pieces.

Heat oil in large skillet over medium-high heat. Add potatoes and red onion and saute until potatoes are brown and crisp, stirring occasionally, about 35 minutes. Season to taste with salt and pepper. Transfer potato mixture to serving dish. Sprinkle with chives.

In Italy, coffee granita is served in tall glasses filled halfway with granita and topped with whipped cream. We've added some white chocolate and anise-flavored liqueur. 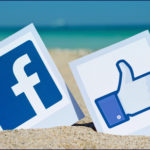