Rosh Hashanah and The Abraham Accords 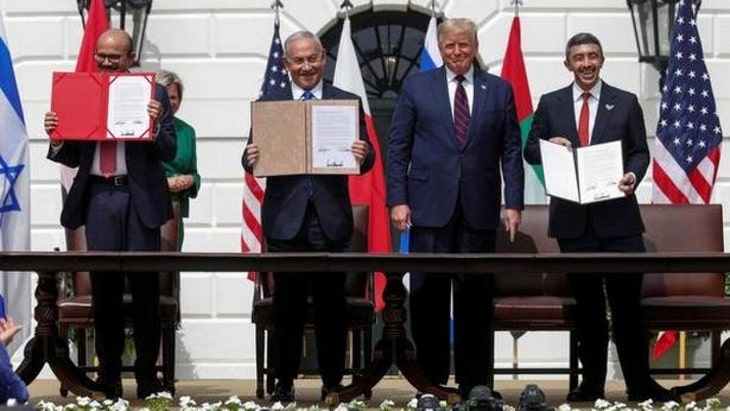 The first historic Abraham Accord happened more than three millennia ago. It's no coincidence it's part of the Rosh Hashanah Torah reading.

There is probably no better way to describe the past year than by way of the words of Queen Elizabeth, looking back at a horrific time experienced by the United Kingdom some years back, when she famously said, “This was an annus horribilis.”

The Latin phrase for a horrible year hardly begins to capture what the world has gone through during this time of global pandemic. It is difficult to celebrate Rosh Hashanah with hope when our lives have become so accustomed to tragedy. Prayers come with great difficulty when accompanied by a seemingly never-ending plague; our faith is profoundly challenged by the prevalence of pain and suffering followed by untimely and unexpected mortality.

Rosh Hashanah will demand a great deal of spiritual trust in the ways of the Almighty. There is much that we cannot understand, and we find ourselves overwhelmed like the biblical Job who was powerless to make sense of life’s inequities and apparent irrationality.

Yet in spite of it all Jews around the world will find a way to come together - with social distancing, masks and prayer shawls - to reaffirm belief. Belief in God who created the world on this day. Belief in God who, according to the biblical reading for this day, heard the prayers of Sarah and blessed her with a child. And belief in God who most remarkably of all blessed us with the miracle of Jewish survival.

The end of the year, according to Jewish sages, carries within it great significance. It is a harbinger of what is to come in the year to follow.

Jews ought to not only see the hand of God writing the script of history but in even more dramatic terms acknowledge the prophetic aspect of the Torah reading for Rosh Hashanah.

Jewish sages long ago taught us that the selections from Torah we choose to read, be they on Sabbath or on holidays, have a hidden meaning. They are divine messages for the most important events of the day. Sometimes their intent is obvious; other times they only become clear when newspaper headlines unexpectedly echo biblical verses.

This Rosh Hashanah we suddenly understand why a strange story about Abraham is appended to the reading from the Torah we would have expected simply to recount the story of creation. “And it came to pass,” the Bible tells us in Genesis 21:22-27, “that Abimelech and Phicol, the captain of his host, spoke unto Abraham” and acknowledged his great success. It was time, in truth perhaps long past the time it should have happened, for former enemies to make peace. “And together they made a covenant.”

This was the historic Abraham Accord. It happened more than three millennia ago – and it happened again this past week.

On September 15, 2020, in the last week of the annus horribilis, the closing days of 5780, Israel, Bahrain, the United Arab Emirates, and the United States signed what were given the name “the Abraham Accords” – a historic event that even the New York Times admits “leaves open the possibility that more Arab states will make peace with Israel.”

Since its inception 72 years ago Israel hoped and prayed for normal relationships with its neighbors, for prioritizing peace over war, for mutual respect and a shared vision that will benefit future generations for years to come. For many it seemed a dream too unrealistic to ever be realized. Yet it always was the dream of the prophets. It is sobering to realize that the ideals of the United Nations, in the view of the organization’s founders, are summed up by the vision of the prophet Isaiah of “nations hammering their swords into plowshares and their spears into sickles”, inscribed on the curved granite walk called the Isaiah Wall in the plaza in front of the UN building.

I do not believe at all that it is mere coincidence that the Torah reading for Rosh Hashanah just happens to be about the “Abraham Accord.” We always had the feeling that someday, as Mark Twain famously put it, “History doesn’t repeat itself, but it often rhymes.”

So on Rosh Hashanah 5781 we will start the year not with any references to plagues but rather to an auspicious sign. As Jewish tradition puts it, may the curses of the past year come to a close; may the blessings promised by God for our future see speedy fulfillment – the kind of fulfillment already illustrated by the miracle that just took place at the White House.

The Michigan Rally: A Report

Anorexia: Starving in the Land of Plenty
The Softball Player
How This 6 Generation Bread Baker Brought Back Israel’s Ancient Grains
Olivia Newton John’s Grandfather was a Nobel-Prize Winning Jewish Physicist
Comments
MOST POPULAR IN Israel
Our privacy policy
Aish.com Is Looking for Great Writers