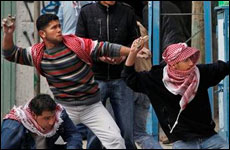 But according to the New York Times, Palestinians who throw rocks are following the “path of unarmed resistance.”

For its March 17 cover story (“Is This Where the Third Intifada Will Start?”), the Times’ Sunday magazine profiled the Palestinian village of Nabi Saleh. But not until over 1,000 words into the story does reporter Ben Ehrenreich mention that the “unarmed” resisters routinely throw stones at Israelis. One of the Palestinians quoted explains that “I want to help my country and my village… I can just throw stones.” Another says, “We see stones as our message.” 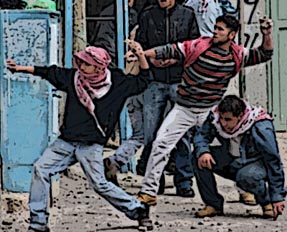 When it comes to whitewashing Palestinian violence, this is just the tip of the iceberg.

In the West Bank town of Bilin, where Palestinian rioters regularly hurl rocks, Molotov cocktails and burning tires, 170 Israeli soldiers were injured during one 18-month period. So how did the Christian Science Monitor describe this violence? “Peaceful Palestinian Resistance is Paying Off” (February 11, 2010). The Los Angeles Times – under the front-page headline, “Palestinians Who See Nonviolence as Their Weapon” – described how Palestinian weapons consist of innocuous “bullhorn, banners, and a fierce belief” in “peaceful protest” (November 4, 2009). Incredibly, the Times suggests that 170 Israelis were injured after being overwhelmed by bullhorns and banners.

This same media mentality can spin even the most violent Palestinian groups as passive and calm. The Globe and Mail, Canada’s newspaper of record, bought into the false notion that Hamas – best known for perfecting the art of bus bombings, rocket fire and restaurant explosions – has evolved into “ethical,” “truthful,” "pragmatic” peaceniks who advocate “non-violent resistance.” (Patrick Martin, July 7, 2009; Orly Halpern, February 26, 2008)

As shards of glass hit the driver’s eyes, the bus veered off the road.

If anyone had any doubt about whether rock-throwing was perhaps “peaceful,” the events of March 14, 2013 have proved otherwise. Rock-throwing Palestinians hit an Israeli bus, sending shards of glass into the driver’s eyes and causing the bus to go off the road.

As a truck swerved to avoid the bus, a car crashed and became trapped under the truck, resulting in serious injuries to a mother and her three children. One of them, 2-year-old daughter, Adele, is in life-threatening condition.

On a single evening last week, seven people were injured in 10 different rock-throwing attacks. One 10-month-old baby was severely injured by glass fragments to the face.

Over the years, dozens of Israeli civilians have been murdered and maimed by this "innocent act of "resistance" that should be more accurately defined as “low-tech terror.”

Tragically, the more the media presents Palestinian violence as peaceful, the more Israel is stripped of its license to fight against them – endangering the very foundation of Israel’s security.

This leaves just one question: Why does the media insist on covering all this up?

Fork in the Road Map

Peace Plan or Phased Plan?
How I Learned to Love the Multiverse
10 Big Jewish Inventions
A Journey through Jewish Sicily
Comments