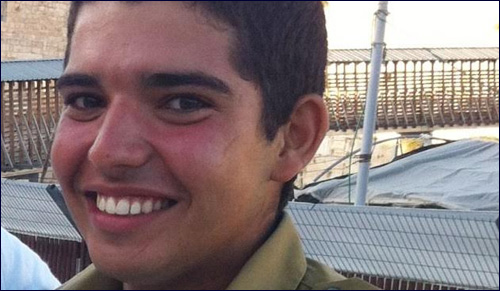 Liel was 20 years old when he was killed in a firefight with terrorists who emerged from a tunnel in Gaza.

Staff Sergeant Liel Gidoni was only 20 years old when he was killed Friday August 1, 2014, while serving as a communications sergeant in the Givati Brigade's Reconnaissance Company. He was killed in a firefight with terrorists who emerged from the shaft of a tunnel in Rafiah, in the southern Gaza Strip. Liel is survived by his parents and his three siblings.

Liel, I stand on the hilltop at Mt. Hertzl, Israel's national military cemetery, with thousands of people as the sun disappears behind the treetops, dripping ethereal light into the air. There are rows and rows of headstones that glow in the twilight as the voices from your funeral echo across the majestic mountains of Jerusalem. 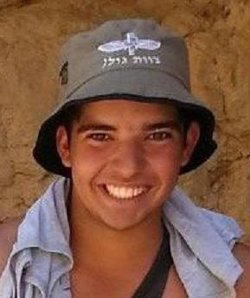 First, your father speaks. He speaks about playing soccer with you when you were a little boy. How he remembers lifting you up into the air. How he can still hear the echo of your laughter and see the smile in your eyes. How you refused to say goodbye to him the last time that you left home. Because you said you would be right back. And you always hated goodbyes.

But he gave you a hug anyway, such a big hug that he said he thought nothing could hurt you.

Your mother tries to speak, but she breaks down after just a few words. “I can’t go on without you” she says and her sobs reverberate through our hearts as a whisper of a wind cradles your mother’s tears.

Then your brother speaks. He is talking about the last day that you spent together. How you were always smiling, always so full of hope. How you were talking about all the places that you still wanted to see. The things that you dreamed about doing. The books that you wanted to learn. And how he wished that he would have listened more closely. He told you how much he loved you and asked for forgiveness from you before it was too late. How could he have known? How can he reach you now?

“Where are all your dreams?” he asks. “Where have they gone now? Who will give us hope now that your bright smile is no longer here to light up the world?”

Someone is sobbing beside me. I turn and see a group of soldiers. They are all crying. Their faces are turned towards the ground, and their arms are around each other.

They must be your friends, soldiers you commanded who recently finished their basic training. Liel, you and I never met. I only know your name. But I know that you have given your life to protect Israel, and I have come to your funeral to say thank you.

I should also thank the group of soldiers beside me. For the nights they spend awake guarding our walls borders. For risking their lives to protect our people. For the dreams that they put on hold. For the goodbyes that they don’t know how to say.

They are reciting Kaddish. The words weave around us and climb into the darkening sky. Afterwards, I walk among the graves and read the names. The dates. So many of them are young, barely out of their teen years. There are photos on top of some of the headstones. Boys playing ball. Boys praying at the Kotel. Boys running into their parents’ arms.

Later tonight I will get on a plane and return to my home in the U.S. I will go back to work and carpool and little league. I will read about your friends in the news and pray for their safety. I will try to remember the heartbreaking echo of your mother’s cries. I will try to remember your father’s words and how the branches of the trees seemed to weep with the Kaddish as it climbed towards the sky.

Remember, I tell myself. You must remember.

These are the soldiers who are giving up their lives for the Jewish people the State of Israel, and the safety and security for all of its residents, including Christians and Muslims, every day. These are the mothers and fathers who are sending their sons into battle zones so that the rest of our nation can sleep. Liel was a young man who couldn't bear to say goodbye to his family.

These are the boys we need to thank and remember.

Michael Levin: An Israeli Hero for Our time
Why Are The Prayers Of Yom Kipur So Repetetive?
Ha'azinu 5783: A Time for Unity!
Twisted Thinking
Comments