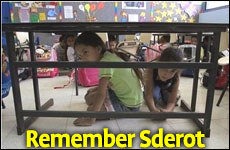 A ‘disproportionate’ victim in Sderot.

It’s been almost two years since the IDF incursion sought to put an end to the Gaza terror regime’s daily rocket attacks on the civilian population in Sderot and the Western Negev. While attacks have been dramatically reduced, the construction of about 5,000 new bomb shelters in the Sderot region demonstrates that the “peaceful” situation isn’t expected to last.

Israel was successful in reducing the threat, but not in changing world opinion. The international diplomatic damage has multiplied since the operation, and Israel still has to justify its military actions.

One common theme in global reporting on the IDF incursion focuses on the “disproportionate” death toll: 1,114 deaths in Gaza, and 13 on the Israeli side of the border.

The Gaza deaths are usually reported as mostly civilian, but, according to a recent report in Haaretz, Hamas admitted that 600 to 700 of those killed were armed terrorists. Given its history of misrepresentation, there’s every reason to suspect Hamas still underreports its casualties and inflates the number of civilian deaths.

According to the Meir Amit Intelligence and Terrorism Information Center, the vast majority of rockets from Gaza are launched from among the civilian population. If there is any disproportion in the situation, it’s in the fact that Israel must fight an enemy that intentionally uses civilians, hospitals, places of worship and schools as a shield.

I believe that most of us, as Israelis and Jews, care about every civilian casualty on both sides of the fence. No one in Israel pursues relentless war against those who, for 62 years, have sought to destroy us. Israel simply defends itself.

As a photojournalist and a humanitarian, often speaking to government officials and foreign journalists, I’ve noticed that the casualties in Sderot are rarely, if ever, mentioned.

After four years of personal experience on the front lines of the media war, I know that once casualties are mentioned, the other side always compares the numbers to the Gaza narrative and changes the focus to what it calls “disproportionate deaths.” This manipulation lets the Palestinian advocates avoid dealing with the underlying cause: the “total war” ideology that calls for the destruction of Israel and the Jews and vows to continue until its goal is achieved.

The intention of the rocket attacks launched from Gaza is to kill and traumatize as many civilians as possible. When Israel responds, it does so by pinpointing the target and never the civilian population.

What about the victims of Hamas rocket terrorism? On November 11, I visited the Yaakobov family, immigrants from the Caucasus mountains in the former USSR. Four years have passed since the father, Yaakov, was killed by a Hamas missile that struck in the Sderot industrial zone factory where he was working on November 21, 2006. He died from that direct hit.

Three months before Yaakov’s death, I moved to Sderot and started my journalism studies at Sapir College. The November 21 attack was the first massive barrage I experienced. Witnessing this attack, and learning of Yaakov’s death, changed my life. Rather than pursuing a degree in journalism, I decided to put my focus on informing the world about what was going on in Sderot.

Four years later, I went to visit the Yaakobov family to pay respects. Arriving at their home, I didn’t even recognize the neighborhood.

The whole area has turned into a construction zone, with three-story cement bomb shelters attached to the old apartment buildings that make up this section of Sderot.

Over the past several years I’ve stayed in touch with the Yaakobov family, and with Yaakov’s son Chanan, who was 12 when his father died. I got to know Chanan in a summer camp and theater program in the United States that the Sderot Media Center organized in 2007.

Chanan said he was starting to forget the way his father’s face looked.

I’m bothered by the fact that Chanan’s father will never be part of his life, and that his death is considered insignificant by those who focus on Israel’s “disproportionate” response to terrorism. In 2008, two years after his father was killed, Chanan spoke at the yearly ceremony for terror victims and fallen soldiers. He was 14, and said he was starting to forget the way his father’s face looked. Now, four years after Yaakov’s death, his wife, Purim, had trouble getting a minyan to the grave to say Kaddish. A small ceremony was held at their home, with a few family members.

Purim was glad to see me, and said I was the only one who called her to see how she was doing. With Purim’s permission, I’m asking others to let her know that there are people who still remember and care about her and her family. I also ask those who have the means to assist in furnishing the family’s new bomb shelter bedroom with book shelves, closets, a bed and an air-conditioner. Maybe even invite the family for a vacation.

Perhaps someone would like to surprise Chanan with a nice birthday present, reminding him that he, his father and the Yaakobov family have not been forgotten.

CSI: Israel
The Promise Of The Land
Which Chat Are You On?: Parshas Behar/Lag Ba’Omer
Do You Like Slow-Cooked Food? Thank the Jews
Comments
MOST POPULAR IN Israel Diary
Our privacy policy