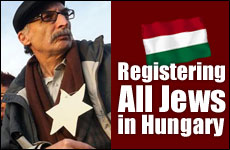 Call for a “Jewish list” raises the specter of renewed anti-Semitism.

If there was any doubt Hungary is fast becoming one of the most anti-Semitic countries in Europe, it was confirmed this week by a chilling statement in parliament.

“I know how many people with Hungarian ancestry live in Israel and how many Israeli Jews live in Hungary,” he said during a debate on the recent fighting in the Gaza Strip.

“I think such a conflict makes it timely to tally up people of Jewish ancestry who live here, especially in the Hungarian parliament and the Hungarian government, who, indeed, pose a national security risk to Hungary.”

“It’s time to tally up people of Jewish ancestry who live in Hungary.”

There was little reaction at first – “We couldn’t really digest what we’d heard, we’re so used to remarks like this from Jobbik,” explained Paul Steiner, an opposition MP who is Jewish. The government, too, appeared asleep at the switch, only belatedly offering its standard apology in such matters.

But ordinary Jews had no doubt about what they had heard. Hundreds of protesters rallied outside the parliament building in Budapest, with many participants wearing yellow stars like those imposed by the Nazis. One man held up a sign that read “I am a Jew. Please, include my name on the Jobbik list.”

Gyöngyösi, for his part, fell back on the classic “I was misquoted,” though his explanation, if anything, made matters worse: He intended only to challenge the government’s “one-sided support” of Israel in the Gaza Strip conflict and to “call the attention to the threat posed by government members and in parliament by Hungarian-Israeli dual citizens.”

Jobbik, the third largest party in Hungary, is already notorious for its anti-Roma policies – and actions. There are credible reports of attacks by party supporters on Roma. Now it is adding Jews. For example, it is convinced the government has agreed to a secret deal with Poland and Germany about providing a refuge for 500,000 Jews in an emergency.

One of the country’s largest Jewish groups is pushing back. The Unified Hungarian Jewish Congregation, headed by Chief Rabbi Slomo Koves, is suing the Jobbik MP.

“In a normal country there is some type of moral borderline where you don’t have to go to court because of something that is said in Parliament,” he said. “All the members of the other parties should stand up and say, ‘This is unacceptable, this guy should just leave.’ And it seems like in Hungary there isn’t that healthy moral stance. So that leaves us the only possibility to go to court, and if we don’t succeed in the Hungarian court then we will maybe go to the EU.”

Keno Verseck at Der Spiegel Online says Gyöngyösi believes he is an effective diplomat for his party, able to hoodwink people about its real views.

Conversations with the right-wing extremist Hungarian politician Márton Gyöngyösi regularly devolve into tiring marathons of relativization. He’s not an anti-Semite, he insists, but the Jews…; he’s not against the Roma, but the Gypsies…; he’s not an extremist in favor of dictatorships, but liberal democracy… has failed…

Officially, Jobbik politicians have thus far vehemently refuted any ideological proximity to neo-Nazism. But the denials have been half-hearted. On its Internet television channel N1, for example, the party once praised Adolf Hitler as one of the “greatest statesmen in the 20th century.” In the spring, a Jobbik representative marked in parliament the anniversary of the alleged Jewish ritual murder of a 14-year-old Christian girl in the village of Tiszaeszlár, involving accusations against Jews in the settlement of murder, which set off weeks of pogroms in 1882-1883. In the summer, the viciously extremist and anti-Semitic European Parliamentarian Csanád Szegedi was expelled from Jobbik when it was discovered that he had Jewish ancestors.

Eva S. Balogh, who pens the Hungarian Spectrum blog, throws some light on Gyöngyösi’s background and his form as a Holocaust denier.

Gyöngyösi is “the foreign policy expert” of Jobbik. Moreover, his sympathies toward the Palestinians, Iranians and Arabs in general are well known. It was sometime in February that Gyöngyösi gave an interview to the British weekly, the Jewish Chronicle. In that interview among other things he questioned whether 400,000 Hungarian Jews were really killed or deported from Hungary to Nazi death camps during World War II. “It has become a fantastic business to jiggle around the numbers,” he told the newspaper.

This article originally appeared in the National Post of Canada

Israeli Pop Star Turns Down Eurovision Gig Due to Shabbat

Brothers In A Barbershop: A Purim Video
Why Are The Prayers Of Yom Kipur So Repetetive?
Ha'azinu 5783: A Time for Unity!
Twisted Thinking
Comments