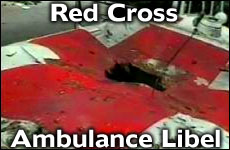 One of the most serious accusations leveled against Israel during the recent Lebanon conflict was that the IDF had deliberately targeted Red Cross ambulances. According to an AP report on July 24, Israeli jets blasted two Lebanese ambulances with rockets on the previous day, striking right in the middle of the red cross that was painted on top of the ambulance in a clear violation of humanitarian and international law. Six ambulance workers and three civilians were wounded. Amateur video provided by an ambulance worker showed one large hole and several smaller ones in the roof of one ambulance and a large hole in the roof of the second. Both were destroyed.

The following claims that appeared in the media are comprehensively debunked in a damning report by the Zombietime blog:

The report, using photographic evidence, finds that each of these claims spread by the international media is, in fact, false. 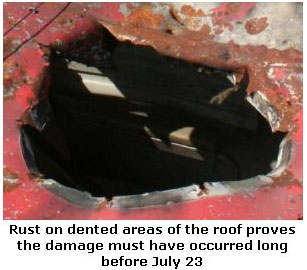 We commend Fox News (click to see video), the only media outlet to cover this story of an apparent anti-Israel hoax. Fox states that comparisons of different photos of the vehicle in question and similar vehicles indicate that the hole in the roof had been there all along, previously filled by a vent.

In addition, a comparison between a number of pictures of the ambulance show considerable rust around apparent bullet holes, indicating that whatever damage had been done to it occurred long before the recent conflict.

Zombietime offers a possible explanation for what really happened, speculating that two previously damaged and rusting ambulances were intentionally further damaged, amateur video footage was taken of the ambulances and Red Cross workers feigned minor injuries, claiming that their ambulances had been attacked by Israeli missiles. Despite journalists' reliance on pre-packaged footage and no proof that the other "victims" of the attack in the hospital were actually from the alleged incident, the Western press broadcast the story as fact without properly verifying such serious charges.

Why has the mainstream media not reported this hoax and admitted its mistake? Contact the following media outlets and ask them the same question.

Caroline Glick writes in the Jerusalem Post about the ambulance hoax as well as Reuters' report that an Israeli missile had been fired at one of its press vehicles, injuring two cameramen. Glick, however, states that one of the cameramen, Fadel Shada (who works for Iranian World TV network):

claims to have been wounded by shrapnel in his hand and leg. These are minor injuries for someone whose vehicle was just hit by a missile.

But then, the photographs taken of his vehicle after the purported missile attack give no indication that the car was hit by anything. There is a gash on the roof. The hood is bent out of shape. But nothing seems to have been burned. Cars hit by missiles do not look like they have just been in a nasty accident. Cars hit by missiles are destroyed.

Yet the glass on the windshield and the windows of Shana's vehicle isn't even shattered. In the photographs taken of Shana on the way to the hospital in Gaza, he lies on a stretcher, eyes closed, arm extended in full pieta mode. He is not visibly bleeding although there are some blood stains on his shirt, but then his undershirt is completely white.

Is this another staged incident?

A New Paradigm for Israel Advocacy
Bechukotai 5782: Divine Retribution
Behar 5782: Working to Live or Living to Work?
The Wholeness of Being Broken
Comments
MOST POPULAR IN Media Objectivity
Our privacy policy