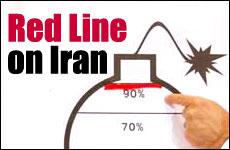 Why Israel needs to draw the line.

Oct. 9, 2012 – In America, all events – domestic and foreign – are currently seen through the prism of the presidential elections. In Israel, though, our prism is not political but existential. Iran’s irrational rulers daily pledge to wipe us off the map while rapidly producing the nuclear capability to do it. Can they be stopped, we ask ourselves, and, if so, by whom? Is there still time?

The Iranian nuclear threat has been publicly discussed in Israel’s free press and keenly debated. Some argue that Iran has yet to produce a nuclear weapon and that Israel must not act alone. Others warn that time is running out and that Israel is duty-bound to defend itself. Irrespective of their differences, though, Israeli security experts agree that sanctions, though damaging to the Iranian economy, have not slowed Iran’s nuclear program. They agree that diplomacy, in spite of increasing flexibility in the international community’s bargaining position, has not produced a single Iranian concession. A nuclear-empowered Iran, Israeli commentators concur, presents not one but several existential threats to the Jewish state.

The most obvious threat is that Iran will mount a nuclear warhead on one of its many long-range missiles and fire it at Tel Aviv. Israelis scarcely believe that the regime that cleared mine fields with Iranian children, championed the suicide bomber, and planned a terrorist attack in Washington can be deterred by a Western nuclear umbrella. When even “moderate” Iranian leaders declare that they can destroy Israel with a single bomb, Israelis must take the radicals seriously. And when President Obama tells the United Nations that “a nuclear-armed Iran is a challenge that cannot be contained,” Israelis could not agree more.

Iran is the world’s foremost state sponsor of terror and if Iran gets the bomb, so, too, will terrorists. They can deliver that bomb in a ship container or a truck bound for any state targeted by Tehran without leaving Iranian fingerprints. Shielded by Iranian nuclear power, terrorists in Lebanon and Gaza can also devastate Israeli communities with tens of thousands of Iranian-supplied rockets.

Israel’s security establishment is certain that once Iran can quickly assemble a bomb other Middle East regimes will seek similar capabilities. As the region continues to roil, nuclear arsenals might fall into fanatical hands. The same extremists who recently attacked American embassies with grenades and automatic rifles could be armed with atomic weapons.

Anybody can debate the Iranian nuclear threat, but only Israel’s democratically elected leaders have the responsibility to decide how to best protect their country’s citizens. Israeli leaders, alone, must assess Israel’s military abilities, anti-missile and civil defenses, and estimate the effectiveness and cost of any preemptive action. At the same time, they must weigh the risk of giving more time to sanctions and diplomacy while the Iranians enrich more uranium and transfer their nuclear program into fortified bunkers that are beyond our reach. Most onerously, they must calculate the time remaining before Iran can pose those multiple existential threats. “The relevant question is not when Iran will get the bomb,” Prime Minister Benjamin Netanyahu recently told the UN. “The relevant question is at what stage can we no longer stop Iran from getting the bomb.”

That question, Netanyahu explained, can only be answered by drawing a red line across the only observable – and vulnerable – component of Iran’s nuclear program: enrichment. By persuading the ayatollahs that they cannot achieve a single bomb’s worth of highly enriched uranium, the world will signal the credibility of its military threat. That, in turn, will give more time for sanctions and diplomacy to work. Rather than dragging our allies into a war, the red line will deter Iran and so lessen the chances of a military conflict.

True, Americans are viewing their world through an electoral lens, but they are nevertheless united in their determination to prevent Iran from acquiring nuclear weapons capability. Indeed, the Senate recently reiterated that conviction by voting 90-1 to rule out any containment of those capabilities. It’s also true that Israelis view their world through the dark glass of Iranian nuclearization, and while that prism might refract their opinions, they agree that time is limited. By marking a clear red line now, we will gain time to explore further diplomatic options, intensify sanctions, and reinforce military credibility.

Islam Itself Recognizes the Jewish History of Jerusalem

Differentiating between Demonizing and Critiquing Israel
Should I Break Up, Get Engaged or Keep Dating?
Time Is Your Precious Commodity
A Constant World in Flux
Comments
MOST POPULAR IN Israel
Our privacy policy