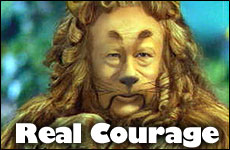 It’s no accident that there are two different words in Hebrew for courage.

Finding an Heir to the Throne, a story by Tuly Flint

In another time and another land, there was a wise and benevolent king and queen. The kingdom prospered under their enlightened rule. But there was a problem. As the royal couple reached old age, they had no heirs.

“Yes,” the queen said, “I can see this is a problem. We don’t want to leave a legacy of battles over who will ascend to the throne. We don’t want the kingdom we have worked so hard to build to be torn apart after we pass on.”

So the king and queen came up with a plan. They asked their advisors to call together all of the children from all corners of the kingdom. Within a month, the gathering took place. All of the children of the kingdom, ages 8 to 16, gathered in the courtyard of the palace. They cheered when the king and queen appeared. A servant followed the royal couple as they made their way through the crowd. The servant carried a huge basket. From the basket, each child drew a small bag of seeds.

“Each of you should go home and plant the seeds you drew from the basket,” the king proclaimed. “In three months, we will tour the kingdom. The child who plants these seeds who grows the nicest and most creative flower garden with these seeds will be our heir.”

Not everyone was pleased with the royal couple’s plan. After all, they expected the heir to be a wise and trustworthy leader, a person with vision, not a gardener. But, out of respect for the king and queen, they acquiesced. Each child took the seeds and tried to be as creative as they could be with their gardens. One grew flowers in the bathtub and other planted the seeds in an old shoe. Someone else grew flowers in an old coat.

All of the finalists grew beautiful flowers. All except for one small girl. People laughed when the girl applied to be considered as one of the finalists. No matter how hard she had tried, nothing at all grew from her seeds. She changed the earth, watered the seeds and added fertilizer, but it was all for naught.

When asked to explain her apparent lack of success — and why she thought she deserved to be considered as heir to the throne — the girl said, “Your Highnesses, I have tried everything and talked with everyone who could teach anything about growing flowers. I thought of finding other seeds, but your orders were explicit — to grow what we could, using the seeds from the bag. I have a second garden, which grew beautifully with other seeds. But, no matter how hard I tried, Your Highnesses, nothing at all grew from the royal seeds.”

The royal couple smiled at her explanation. They chose her as their heir, over children who had grown beautiful and elaborate floral displays.

There was, of course, a great uproar when the royal couple announced their choice. It was outrageous enough that the king and queen wanted a child who was capable of gardening rather than leading or governing. But why would the royal couple choose the very worst gardener in the kingdom, the one who could grow nothing at all from the royal seeds?

The king and queen explained their plan. “This wasn’t a test of gardening,” they explained. “It was a test of character. All of the seeds in the royal basket were boiled before they were given to the children. None of them were capable of growing flowers. Clearly, only one small girl had the courage to play by the rules, tell the truth and keep bringing people together and learning, despite her frustration. She’s shown you what she’s made of, and why she’s worthy of being your next queen.”

What does Tuly’s story tell us about real courage?

Who, one wonders, was the child with the most courage? Was it the one who was chosen to be the heir to the throne — who followed instructions and didn’t break the rules, though she had little to show for her efforts? What’s the moral of the story? Should we conclude that those who fail honestly are more courageous than those who bend the rules to seize opportunities and post impressive results?

In a business environment where bona-fide experts extol us with wisdom that says, “First break all the rules,” and “Think out of the box,” it’s hard to tell where to draw the line. We’re supposed to keep our eyes on the prize and do “whatever it takes” to make our numbers. Yet, there are some lines we dare not cross — and some seeds that we shouldn’t be willing to sow.

Is this the choice we have — to fail nobly or succeed dishonorably? Aren’t there other alternatives?

In Hebrew, there are two definitions of the English word, “courage.” One is chutzpah, pushing your way to the front of the line. Those with chutzpah seek forgiveness, not permission. They play to win by pushing others out of the way. They are oblivious to their impact on the system as a whole and impatient with those who can’t or won’t keep pace. Chutzpah is the brand of courage you display by ditching the royal seeds and serendipitously replacing them, despite explicit specifications to the contrary.

The other definition of courage is ometz lev, which translates literally as, “strength of heart.” Ometz lev starts with individual conviction that there is a better way, but it doesn’t stop there. With ometz lev, you play to win by bringing others with you and encouraging them to take their game to a higher level. You draw others in, rather than pushing them out of the way. You earn a mandate to experiment and take initiative, rather than sneaking around and being deceptive.

If the seeds you are given don’t take root and sprout, you’ll face a moment of truth. The choice is yours. One choice, of course, is to make do with a barren garden and excuse your lack of productivity by saying, “I just followed orders.” You can become indignant at the king and queen by suspecting that they’ve set you up to fail.

If you choose the path of courage, you also have a choice. You can choose chutzpah, like the prospective heirs that the king and queen rejected. Or you can choose ometz lev, by earning a mandate to take initiative and become a thought-leader for the rest of your organization and bring others with you.

Growing flowers wasn’t the quality that the king and queen sought, after all. Courage — the ometz lev variety of courage — was. In the end, it wasn’t the child who grew the most bountiful bed of flowers, but the child who demonstrated…

Candor, the courage to speak and hear the truth, by approaching the royal couple and saying, “This way isn’t working. Let’s talk about doing something different, if you’re interested in growing a bountiful flowerbed.”

Purpose, the courage to pursue lofty and audacious goals, by checking to see whether it is really mission-critical to make flowers grow from the seeds or whether she should keep her eye on a bigger prize. It is easy to mistake your own parochial objectives for mission success, when there may be a bigger enterprise-wide “win” to pursue. It is easy to be distracted by short-term wins when there is a nobler and loftier purpose to pursue.

Will, the courage to inspire hope, spirit and promise, by persevering in the face of frustration and staying “on top of her game,” despite the fact that others didn’t seem to have the same frustrations and setbacks that she encountered. The royal heir never stopped asking questions, learning and trying new and different techniques, even when it was tempting to throw in the towel and say, “I’m toast.”

Rigor, the courage to find better protocols and make them stick, with the serenity to accept the rules that cannot change, the strength and creativity to change the rules that are getting in the way, and the wisdom to know the difference. It’s tempting to bend rules that are supposed to be followed, particularly when you’re confident that you aren’t likely to be caught and there’s a lot on the line.

Risk, the courage to empower, trust and invest in relationships, by reaching out to the other children in the kingdom, encouraging them to exchange best practices, or accepting such an invitation, if it came from one of her supposed rivals. The girl chosen to be the heir to the throne may not have grown an impressive garden of flowers, but she did succeed in bringing people together and creating a sense of community.

Unless you’re dealing with kings or queens, you can take solace in the fact that you probably won’t encounter a test of courage as elaborate or oblique as this. But that doesn’t mean that your colleagues aren’t watching the way that you handle little moments of truth, and sizing up whether you’ll act with courage when the going really gets tough.

Reprinted with permission from http://www.courageinstitute.org/

Tuly Flint is a professional storyteller and Clinical Social Worker who is a member of The Courage Institute's faculty in Israel. In addition to conducting workshops on courage, Tuly works with the Israeli Defense Forces on diversity and human rights and trauma

Dr Merom Klein is Director of The Courage Institute, Western Galilee, Israel. His book, The Courage to Act, was co-authored by Dr Rod Napier and was published in May 2003 by Davies-Black. Merom maintains a leadership training and organization change consultancy in North America and Europe.