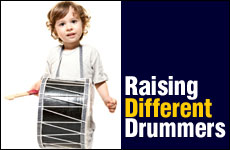 You can't change your child's personality. Embrace it.

Doing nothing is highly underrated, especially when it comes to parenting.

Before you send me careening into the “toxic” swamp where old counselors retire, I’m not talking about doing “nothing” when little David is running into traffic, or using the new baby’s head for target practice.

I’m talking about the relatively recent (and peculiar) notion that “good” parents need be constantly vigilant in our never-ending task to “get involved” or mold our progeny into how we think they should “be” – for their own good, of course.

Not only is this generally an unsatisfying mission, but the consequences often send our progeny on a mission to take up crocodile farming as a career choice.

Our children's personalities hang on with more persistence than a migraine.

As we delve more deeply into the biology of the brain, and that elusive concept we call “personality,” we’ve learned that our children come into the world with a distinctive “road map.” Their personalities hang on with more persistence than a migraine. Only the most extreme

circumstances (think Wolf Boy) may fundamentally alter it. Other than that, we can’t “logic” it,

or discipline it out of existence.

Despite DNA from the same parents, how often have we wondered “now where did that streak come from?” (Or blame a wayward gene from our mate’s pool.)

Some come into the world cooing, docile, sweet, pliant, calm, and they’ll remain so until they’re waiting in line at the Social Security office. Others burst forth with a hey and a holler, their little bodies perpetual motion machines. These are the ones who’ll hunt for a new route to the Indies when you take them to the park.

Yet, despite both scientific and our own anecdotal evidence, we parents often foolishly still believe we have more power over all this than we do. We don’t.

Worse, any attempt to fool around with our child’s “core,” or unique spirit only leads to power struggles that makes foreign policy look like a game of Go Fish.

Of course, we can’t simply allow him to tear through the world, never mind Wal-Mart, like a typhoon, establish his own rules of civility, bully or boss, or take our car for a joy ride after his “Now I am a man” Bar Mitzvah speech.

The big challenge here is knowing when, how, and how much to futz with Mama Nature. What works, what is expected, and what is effective with Dina may well throw our Marc into a tailspin. Making sure we’re still instilling civilized, ethical behavior while working with, rather than against, our children’s differences presents us with a huge challenge. Even the most loving parents will admit to feeling more “in synch” with one child than another, especially if “the other” is more difficult.

Yet, differentiate we must. Accepting each child’s innate personality, abilities, and tolerance is not only advisable, but a survival skill – for them and for us. Then, working to hone those traits, making each child a custom job, bearing in mind that the cliché “less is better” has never been more true than in dealing with children.

Those of us who deal with so-called “difficult” or “problem” kids, often miss the fact that “the problem” may have been exacerbated when parents try to do too much “changing,” “interfering,” “molding,” and yes, even “diagnosing.” Yet, how often have we quaked over a potential problem, driven ourselves (our mates, the teachers, relatives, and people at the supermarket) crazy, only to find out that the problem took care of itself? And how often have we interfered, only to find we’ve created new, worse problems? Worse, new theories and meds have driven parents and some practitioners to create a nation of over-diagnosed, over-medicated children who are too quickly labeled with “ADHD” “Learning Disorders,” and high functioning Autism. All this by age five.

Tips for Dealing with Your “Different Drummer” Effectively

1: Decide if there’s a problem with wisdom. There’s a difference between “difference” and “disorder.” If the child is getting along, relatively happy, functional, and developmentally generally on target, “differences” may be a matter of personality.

2: Have patience. Young children mature at different rates. A small “problem” at age three, may disappear when our child is eight.

3: See personality traits as neutral and accept differences. “Stubborn” can lead to persistence. Solo activities can lead to a high degree of creativity. Even “anger” can lead to discernment and positive advocacy. It’s our job to tweak and guide, not to change them.

4: Don’t over-react. The process of becoming over-concerned and over-managed itself can do harm, and make the child unnecessarily anxious, and damage self-image.

5: Work with the child’s personality. Instead of fighting it, hone the positives, while re-routing the “negatives.”

The parent who does only what is necessary to a) tweak personality to make their children empathetic, civilized, and persistent, and b) offer opportunities for the child to march to his/her own drummer, is truly a master of parenting.

Discovering My Child is Autistic

What Fathers Need to Know
Vayelech 5783: Regret and Repent
Rabbi Sacks: Focus On the Important, Not the Urgent
Put Your Foot Down: Are Human Feet Poorly Designed?
Comments
MOST POPULAR IN Family
Our privacy policy
Aish.com Is Looking for Great Writers