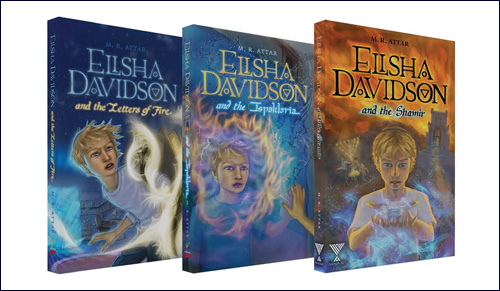 Do your kids enjoy fantasy adventures? What’s their vampire IQ? You might be shocked by their prowess.

As parents we may be thrilled that our teenager is actually reading, but what values are impressionable minds ultimately absorbing from such content? A treasure trove of fantastic personalities, legends and esoteric mysteries can be found within Jewish tradition, history and Torah, so why aren’t we providing alternatives for our youth based on Jewish content and values?

I created the Elisha Davidson trilogy to inspire the imaginations of our teens to our phenomenal, life-enforcing Jewish heritage.

Because I wanted to inspire the imaginations of our teens to our phenomenal, life-enforcing Jewish heritage rather than steep it in violent occult darkness, I created the Elisha Davidson trilogy.

Do we really want our kids fantasizing through an entire series about gruesome zombies or Greek gods?

When the books on Jewish bookstore shelves don’t capture their imagination, is it any wonder they turn to Vampire Academy, Zombie Apocalypse, Percy Jackson and similar fantasy books that do offer what they crave?

As a career television executive, I’ve launched 10 television channels in as many as 120 countries and subscribe to the industry adage that ‘Content is King’ for successful entertainment. Our Torah heritage is a massive, untapped reservoir of spectacular content, and it is up to us to create the medium that will showcase our captivating content. I believe the Elisha Davidson Trilogy does this. Some reviewers have heralded the Elisha Davidson series as a new genre; others have labeled it the ‘Jewish Harry Potter.’ I’m not particularly enamored by the latter categorization, but I am thrilled to see reviewers, teens and parents alike quickly get the point and turn into avid fans.

The adventures of Elisha Davidson first came to life in my living room before Harry Potter was a household name. For years I hosted a Shabbat afternoon story-telling group for my children and their friends. I would read Torah stories, tales of the Sages and just about anything really interesting and Jewish that I could get my hands on. As time went on I wanted to forge a stronger bond between the kids and the content. I wanted to ignite their imaginations, so I made up my own story about a young boy named Elisha Davidson living in modern-day Jerusalem. His mysterious adventures were interwoven with stories from Torah, Talmud and Medrash. The kids were spellbound and continued coming to the group well into their late teens. I wanted to write the stories down, but as a working mother time eluded me. Fast forward a few years, and a lot of writing, and now thanks to Menorah Books, a years’ worth of Elisha adventures have been published as the Elisha Davidson Trilogy. 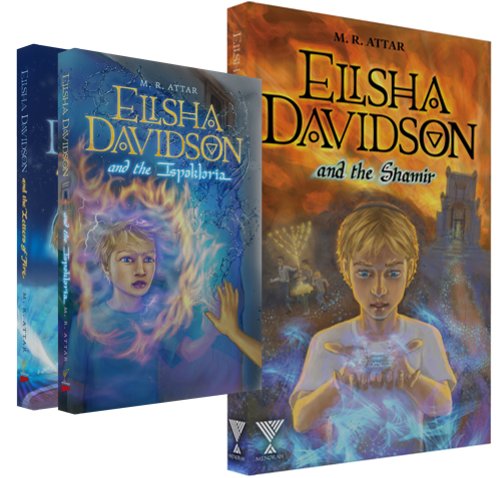 The overall plot of Elisha Davidson is fantasy, but instead of the Hogwarts School of Witchcraft and Wizardry or the never-ending variations of Transylvania High, the backdrop is Jerusalem’s eternal Old City. Elisha is a 6th grader at North Temple Mount Academy, and the magical and captivating characters surrounding him include Torah legends and personalities. Each page was crafted with meticulous adherence to traditional Jewish sources which are so wondrously compelling in their own right, they naturally fit right in.

Can Torah-sourced content compete with the allure of the Dark Arts? You decide: Elisha discovers a powerful Choshen stone, encounters a Shamir (a worm King Solomon used to cut through stone), gets to taste manna from Heaven, joins forces with Jerusalem’s greatest mystic, discovers one of the 36 hidden righteous men , and even confronts the treacherous Ashmodai (King of the demons). Not to mention that he’s being mentored by the wisest man who ever lived. Sorry, Dumbledore…you just can’t compete with King Solomon.

It’s amazing how much information and wisdom can be packed into this genre! Master storyteller, Rabbi Nachman of Breslov said, “The world says stories are meant to help you sleep. I say stories are meant to wake you up.” Elisha Davidson was written to awaken youth to our incredibly awesome heritage. These books are not just about delving into fantasy; they’re about discovering the real thing.

Spider-Man on the Roof
It Takes A Lot Of Faith To Be An Atheist
How Instagram Brought Back This Nostalgic Soup
What Makes Eli Run?
Comments
MOST POPULAR IN Current Issues
Our privacy policy