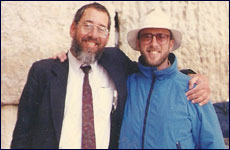 What one person can do when he really cares about the Jewish people.

One day, when Meir Schuster and his friend were in their early twenties, they had just finished praying at the Western Wall. They watched other young people going to the Wall and being lit up by the experience. And the thought struck both of them at the same time: Why can’t someone connect with all these people and bring them closer to their heritage? They noticed one young backpacker leaning against the wall and crying. They watched as he composed himself, and started walking away from his moving encounter.

That was the moment of epiphany: this fellow had nowhere to go with the feelings that had just emerged. Rabbi Schuster’s friend walked over to the young man, gently tapped him on the shoulder, and said, “Hi, I’m Chaim Kass – I hope we are not bothering you, but it looks like something happened for you there. Can we introduce you to learn some more about Judaism?” This young man's reaction was one of appreciation, and they introduced him to a rabbi with whom he could study a little Torah.

The two young yeshiva students were captivated by this experience, and they started going back every afternoon during their breaks to speak with more young people. They connected with a dozen more people in the first two weeks, inviting some to come to Meir Schuster’s house for a Shabbos meal. Seeing the impact he could make in connecting young Jews to their heritage, Meir Schuster took over completely, and he continued doing this for the next 40 years.

Day in, day out, feeling sick, with a sprained ankle, in the hottest weather and the coldest, in the rain and in the snow, wanting to share his love for Judaism with his fellow Jew, Meir Schuster was there. He did this out of pure kindness, receiving no monetary payment.

It was Rabbi Schuster's pure earnestness that found its way into another's heart gently and directly.

People think they need to be a charismatic charmer to be successful at reaching people, but it was Rabbi Schuster's pure earnestness that found its way into another's heart gently and directly. Rabbi Schuster would typically ask both men and women if they wanted to attend a class or come for a Shabbos meal. He would remain in touch with as many individuals he met that he could, sending cards of encouragement that managed to make major impacts - even thousands of miles away. As one friend said, “No one cared more deeply about a soul than Rabbi Meir Schuster.”

In the 1980's, seeing that there were only youth hostels run by Moslems or Christians in the Old City, Reb Meir became determined to create a Jewish youth hostel where young Jewish men and women could stay and learn about Judaism in a warm and relaxed atmosphere. This unlikely speaker then became a fundraiser, establishing the men's and women's Heritage House, and traveling around the world for three months a year.

Then, beginning in 2000, after terrorist attacks in Israel were on the rise and tourism dropped off substantially, Rabbi Schuster established the Shorashim Heritage Centers for young Israelis in several locations throughout Israel. Over 50,000 young Israelis have attended classes at these centers already.

Meir Schuster, in a way, brings to mind the greatest and the most humble leader of the Jewish people, Moses, who was determined to overcome his most glaring weakness of being a shy and awkward speaker in order to fulfill his role for the Jewish people. Meir Schuster’s wife said that she saw how her husband went against all odds to do what he did for years after year.

Rabbi Noah Weinberg, of blessed memory, said that if Rabbi Meir Schuster, who was by nature an extremely shy individual, could rise above his limitations to reach out to help so many Jewish people reconnect with their heritage, then anyone – no matter how shy or reserved he was – could do it. He is a model who can inspire everyone to pursue his deepest goals, even if he doesn't think he has “the right stuff.”

“When he decided to do something, he believed that the Almighty would help him, and he wouldn't give up until the end,” Rebbetzin Schuster said.

Two years ago, Rabbi Schuster began to develop Lewy Body Disease, a rare degenerative disorder whose symptoms are those of both Alzheimer’s and Parkinson’s Disease. His wife said that “when he was barely able to even walk anymore, he still wanted to go to England to raise funds for the Heritage House. He is a real fighter. Nothing could stand in his way because every action he did, he did for a Divine purpose.”

As the disease began stealing away his ability to think and remember and communicate, he redoubled his efforts.

Rabbi Michel Twerski describes Rabbi Meir Schuster as “an unpretentious, self-effacing legend of our time. A rare figure of history who has touched so many lives through his profound authenticity.” And he couldn't care less about any recognition for himself.

Today he can no longer be the man beside the beloved Wall. He came to require full-time care from his devoted wife and daughter at home, and is now in a nursing facility connected to a feeding tube.

Rabbi Meir Schuster has never cared about wealth, power, or prestige. He devoted his life to the simplest form of reaching out to ignite another’s inner spark, showing us what one person who really cares about the Jewish people can do.

Visit www.RebMeirSchuster.org, a site lovingly created by Reb Meir's students to honor him.

What is a Jew?

Adam and Eve in the Garden of Jerusalem