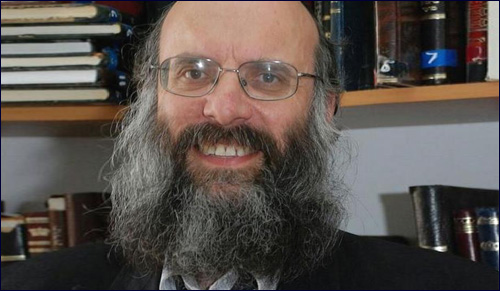 Rabbi Twersky was brutally murdered on November 18th in an attack on his Synagogue while he was wrapped in Tallis and tefillin and immersed in prayer. His loss is a terrible one for the Jewish people.

Rabbi Twersky reigned from two dynasties. On his mother’s side, he was the grandson of Rabbi Yosef Dov Soloveichik, head of Yeshiva University, and a member of the illustrious Soloveichick family whose teachings and writings on the Talmud and Maimonidies redefined the way Jews analyze texts, taking every law and statement of our Sages to a depth that no one had previously.

On his father’s side, he was from the famous Chassidic Twersky dynasty, the grandson of Rabbi Meshullam Twersky, the Tolner rebbe of Boston.

Rabbi Twersky brought together these two worlds, the world of Talmudic scholars with the world of Chassidic spirituality, in a way that was harmonious and seamless. When he studied Torah, he carried the breadth of Torah knowledge on the tip of his fingers. During his discourses, he would compare and contrast texts which he would draw from a wide range of sources, sometimes the most obscure places.

Rabbi Moshe Twersky was a Jew from another world. He was an angel among men. He was the paradigm of holiness and purity, a tzaddik in every sense of the word. When he would perform mitzvot he would do so with a fire, passion and tremendous joy. Though his tall and broad frame, deep eyes and quiet demeanor often made him a bit intimidating, when he was serving God he would look like a kid in a candy store.

I had the privilege of studying under him when I was 18, and was a guest at his home for Shabbos almost every Friday night for three years while I was studying in Jerusalem. After the meal was over, and all of the other guests would leave, I would remain in his home to learn with him until the late hours of the night.

Before we would begin, he would bring me some cake and soda (as if I hadn’t been completely satiated by his wife's delicious food, which is famous throughout Jerusalem) while he would go off to a corner to repeat the Shema with intense Kavana, meticulously saying every word. He would return, take off his jacket – it was the only time I saw him that casual – and dive into our learning session.

Rabbi Twersky was brilliant. All of his students thought that he knew everything in Torah. He was also well versed in secular subjects – the son of a Harvard professor after all. But when we would learn together, he would treat me as an equal. He would ask me questions and accept my answers. He would make suggestions and retract if I didn’t agree. It is from him I learned that even when teaching students who are not as learned, a teacher must be vulnerable and honest, and include the students in the learning process.

After our learning sessions were over, no matter how late it was, we would spend a few minutes discussing some personal things in my life. He would advise me, guide me, or sometimes just listen. When I would finally leave his house, usually long past midnight, sometimes after 2 a.m., I would begin the hour walk back to my yeshiva and digest all of the inspiration. The hour walk felt like 15 minutes.

These were the most transformative experiences of my life.

May his memory be for a blessing, may his family be comforted, and may we know no more sorrow.

Rabbi Twersky hy"d was the real deal. I had the privilege of being in his Torah class and sitting next to him, for approximately two years.

Just pick an area in life that you feel needs to be worked on, or focused on, and he lived it. Our sages teach that God sanctifies those who are close to him. Rav Twersky was very close to God. It's reminiscent of the words of Rabbi Noach Weinberg zt"l: "Find what you are ready to die for, and then live for it!" Rabbi Moshe Twersky didn't only die through sanctifying God's name; he lived by sanctifying God's name. Day in, and day out, he was working on getting closer and closer to God.

Rabbi Twersky was a real seeker, always looking to better himself, but never at the expense of someone else. I was once at his house when his wife mentioned to me that he never asked anyone to do anything for him – anyone, ever, not his wife, not even his kids! How quick are we to tell our kids to get our phone, or our keys, or to help set the table, or take the groceries out of the car?

Rabbi Twersky would never ask anyone for help, not because he was too proud to ask for help, but rather because he didn't want to be lazy. He felt that by asking, when he could do it himself, would be giving into an inclination for laziness.

Rabbi Twersky was tremendously humble, never looking for any honor, or recognition. His seat in the yeshiva was in the back of the study hall. He didn't need, nor want, to sit at the "head of the table."

I once asked him for a blessing, and he turned the tables, insisting that I give him a blessing instead!

Nothing was beneath his dignity, I heard from Rabbi Mattis Feld that he'd once visited Rabbi Twersky's house and asked if there might be some grain food (cookies, cake etc.) to eat. Rabbi Twersky immediately went to the kitchen. After not returning for a few minutes, Rabbi Feld wondered what had happened, when suddenly he heard pots and pans, and Rabbi Twersky returned and said, "I'm making a pot of noodles for you." Nothing was beneath him, if he could help, he'd do it.

Rabbi Twersky had patience and tolerance towards every student. There were many a time when I had difficulty understanding something that we were learning, and he would never, ever make someone feel silly, but rather take the time to explain whatever the matter was, over and over.

He would never get angry. That doesn't mean he agreed with everything and everyone. He would firmly state his opinions, but never with anger.

Rabbi Twersky was totally committed to teaching and studying Torah. If he had a Torah class to give, you can be sure he'd make it. I remember one winter, February 2003, when there was a major snowstorm in Jerusalem. (Israel is not known to handle their snowstorms too well, even with a few inches on the ground.) Obviously there wouldn't be class that day, as none of the rabbis could make it to the yeshiva.

Then, in the middle of a snowball fight, we see Rabbi Twersky trudging through the snow toward the yeshiva, as if it were any other day. To him, it was any other day, the only difference being that he'd walked from his house in Har Nof, over 4 miles away! (He did it again last year, only this time since the yeshiva had moved even further away.)

This past Elul, even though he was suffering with pneumonia, he was there, in yeshiva, ready to teach Torah.

Rabbi Twersky was very careful in his observance of mitzvot. There was no such thing as halfway. He would take upon himself many things; however, he would never impose any stringencies upon himself or anyone else, not even his own children.

He would never waste a second. Learning late into the night, rising early – to study, pray, and then learn some more. He was in it for the long haul.

My father was in the same class as Rabbi Twersky as youngsters growing up in Boston, and my father told me, that even as a young boy, Rabbi Twersky was amazingly gifted, and extremely diligent in his Torah study.

Originally from New York, Rabbi Gavriel Friedman has spent the last decade studying and teaching in various Yeshivot throughout Jerusalem. He is currently teaching at Aish HaTorah Jerusalem, where his lectures highlight the entire gamut of Aish programs, including the Discovery Seminar, Jerusalem Fellowships, Executive Learning Center, and more. An up-and–coming star of the Jewish speaking circuit, Rabbi Friedman has lectured in dozens of cities around the globe, including Johannesburg, London, Montreal, and across the East Coast of the United States. Rabbi Friedman’s charisma captivates audiences of all ages and inspires men and women across the Jewish spectrum. His unique ability to present Torah concepts in an intriguing yet entertaining fashion leaves his audiences thirsting for more. Rabbi Friedman currently resides in the French Hill neighborhood of Jerusalem, with his wife and children.

An Army with a Heart