Rabbi Beaten in the Ukraine Dies 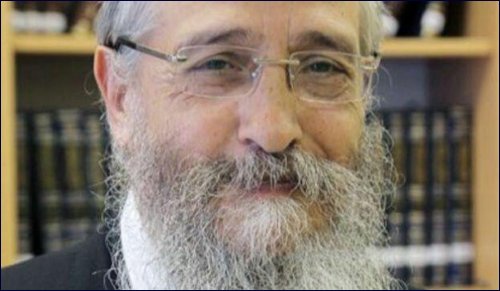 Formerly a rabbi in France and Israel, for several years Rabbi Deitsch had run a hospitality center at the burial site of the founder of the Chabad-Lubavitch movement, Rabbi Schneur Zalman (known as “the Alter Rebbe”), in the Ukrainian town of Haditch.

This was a massive job. For two hundred years, Jews have travelled to the Alter Rebbe’s grave to pray and to commune with other Jewish visitors to the site. In recent years, the numbers of people traveling to Haditch has increased. Rabbi Moshe Moskovitz, the Chabad Rabbi in Kharkov, a town about 200 km. east of Haditch, explained that the difficult conditions in modern day Ukraine have moved ever more Jews to connect to the wider Jewish community, and at times to pray in Haditch. “As it’s gotten harder here materially, more and more people have been seeking to connect spiritually,” he explains.

On October 7, 2016, Rabbi Deitsch, then 63 years old, was near a train station in Zhitomir, Ukraine, travelling before Shabbat, when a crowd of at least four attackers targeted him, beating him mercilessly. After knocking the rabbi unconscious, the attackers robbed Rabbi Deitsch, stealing his cellphone and money, before leaving him for dead partially hidden beneath a bridge. Rabbi Deitsch lay there all night, bleeding and comatose with massive brain injuries, before being spotted by a passer-by Saturday morning.

After undergoing surgery at the local hospital in Zhitomir, Rabbi Deitsch was transported by Air Ambulance to Sheba Medical Center near Tel Aviv. As Rabbi Deitsch fought for his life, Ukrainian Jewish officials appealed for prayers.

On Shabbat, April 15, 2017, after remaining in critical condition and in a coma since his attack, Rabbi Deitsch died from his injuries. He was buried the following day in Israel. Rabbi Deitsch is survived by his wife Shterna Sara, the couple’s eleven children, and by his three brothers.

After the assault, Ukrainian authorities began to search for Rabbi Deitsch’s attackers. Over a week later, police arrested four people in the rabbi’s attack: a 40 year old man, a 21 year old man, and two girls, ages 16 and 13.

Although the rabbi likely stood out in his black coat and black hat among the other commuters in the Zhitomir train station, the four who were arrested told police that their motive in attacking Rabbi Deitsch and leaving him for dead was robbery, not anti-Jewish hate. That is also the opinion of Rabbi Shlomo Wilhelm, the local Chabad rabbi in Zhitomir. “It should be noted,” he said at the time, “that this is an unusual case that does not in any way reflect on the community in Ukraine.”

Others are not so sure. In 2015, the ADL noted that nearly a third of Ukrainians, 32%, held anti-Semitic views. Two months after the brutal attack on Rabbi Deitsch, Jewish pilgrims to another burial site of a distinguished rabbi, Rabbi Nachman of Bratslav, were attacked as they slept on Shabbat. Neo-Nazis sprayed teargas on Jewish worshippers, placed a pig’s head in a synagogue, and poured fake blood on the synagogue’s interior. Two Jewish visitors were taken to a local hospital after the attack.

At the time, local Jewish leaders noted that attacks against Jewish pilgrims to Ukraine aren’t uncommon. In September 2015, vandals destroyed tents that were set up to accommodate Jews planning to visit the town of Uman, the site of Rabbi Nachman’s grave.

The fact that so many revered Jewish sages are buried in Ukraine is testament to the rich Jewish history in the country. Before the Holocaust, over one million Jews called Ukraine home. 900,000 Ukrainian Jews were murdered in the Holocaust. After the fall of Communism, Ukraine’s remaining Jews - 70,000, making Ukraine the 11th largest Jewish community in the world - began to rediscover their Jewish heritage. “We had what you’d call a renaissance, and it came through the children, who were suddenly going to Jewish schools and learning about Jewish holidays and traditions,” explains Dmitry Spivakovsky, who runs a Jewish charity in the town of Cherkassy, 120 miles southeast of Kiev.

Today, some are questioning the future of Jewish life in the Ukraine. In March, 2017, a Ukrainian legislator and war hero, Nadiya Savchenko, gave an interview in which she referred to Jews using an ethnic slur, seemed to encourage anti-Semitic statements, and menacingly (and erroneously) accused Jews of wielding “80% of the power” in Ukraine. Jewish emigration from Ukraine to Israel has skyrocketed in recent years, tripling between 2013 and 2015. In 2016, the latest year for which figures are available, over 5,000 Jews moved from Ukraine to the Jewish state.

The Alter Rebbe is known for coining the beautiful saying, “A little bit of light dispels a lot of darkness.” In losing Rabbi Deitsch, the world has lost a point of light, a spiritual leader who dedicated himself to teaching and hosting his fellow Jews. As we mourn Rabbi Deitsch, it’s up to each of us to work to do good deeds in his memory and to try and follow his example of helping to bring light once more into the world.

5 Ways to Raise Kids to Love Being Jewish

Anti-Semitism on Campus
The Softball Player
How This 6 Generation Bread Baker Brought Back Israel’s Ancient Grains
Olivia Newton John’s Grandfather was a Nobel-Prize Winning Jewish Physicist
Comments
MOST POPULAR IN Israel
Our privacy policy
Aish.com Is Looking for Great Writers