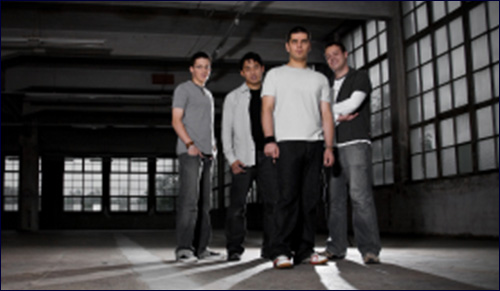 I hate the tension and conflict that exists between these two groups in my school.

I live in a rather small Jewish community with a Jewish youth group. Within this group two smaller “cliques” have formed. One is comprised of girls and guys who are less religious, all very academic and artsy—typical American high-schoolers. The other “clique” (of which I'm part) is comprised of just guys, is the more religious group, and we're less academic and artsy but have a wider range of interests.

I think there has been some concealed tension between the two cliques for a while, but just this past week the conflict became open and verbal. My clique feels that the other views and treats us as if we're inferior to them, and they feel that we are too loud and obnoxious (though I will admit, we are rather loud). I hate to see conflict within our Jewish youth group, especially considering its small size, but I can't see the whole group getting along very well without the tension bothering many of us. I really hope you can help me solve this dilemma!

When I first read your question, I had to re-read it a few times to try and decipher and distinguish the character of each of the two cliques. And therein lies the key to dissolution of the tension between the groups: differences schmifferences. You’re all teenagers. You’re all Jews. You’re all people.

Okay, so you’ll tell me the two groups differ in the “feel” of the kids and the “feel” of the group. So what? People are allowed to be different! I love the many variegated friends I have, and I would hate to have a homogenized mush of equal, boring friends, all just like each other. Blah!

So they’re more artsy. Wow! I’d love to hear what an artsy person has to say about the world! So you’re more religious. Wow! If you live your “more religious” life with your “more religious” sensitivities in front of that other group, what an interesting experience that would be for them! So you guys are loud. Include the other group in the loud, gregarious behavior! Walk up to them, clap ‘em on the shoulder, and say, “It’s great to see ya today!” They won’t mind the loud behavior if it’s positive and directed towards them.

If you want that other group to respect you more: respect them more.

Your group feels that the other group treats you as inferior. I have a solution for that: whichever way you treat someone else, that’s the way they will treat you. If you want that other group to respect you more: respect them more. It’s magic that works (trust me, I’ve tried it many times, with amazing results).

More than anything, I would challenge all of you in your binary thinking. Stop thinking about “the two groups.” It was convenient for me to keep the terms “one group” and “the other group” as I was writing about what “you guys” could do and how “they” would respond, BUT I only used those terms because it helped readers understand who could do what and who would respond and how. Now it’s time to let go of the divisions. There is no “us” and “them.” There are no “two cliques.” There are no “two different groups.” There is just one group, of disparate, individual people, each person with wants and needs and desires and capabilities and talents and personalities of his or her own, that you can learn from and grow from.

In my life, I have learned the most from the people who were most different from me. Embrace the differences as a chance to explore unknown territories. Take down the dividing line and be kind and respectful to all the members of the group.

Simple things like, “Hello! How are you today? Nice to see you!” can go a long way. Walk over the line, to the other side of the room, sit down next to someone from “the other group,” and strike up a conversation. “What classes are you taking in school?” “Did you try that new Chinese place?” Or even just “Hi. Mind if I sit here?”

Divisions between people are created by us. And they can be dismantled by us, too.

The Most Important Interpersonal Skill

Q&A for Teens: Dumbing Myself Down

Q&A for Teens: Stop Staring at Me

Q&A for Teens: Disconnected Jew
Scientific Curiosity and the Divine Encounter
Mind Over Milkshakes
Love the Convert
Comments
MOST POPULAR IN Current Issues
Our privacy policy
Aish.com Is Looking for Great Writers