Q & A for Teens: Dating Jewish? 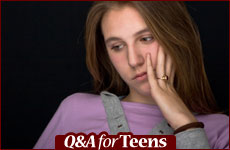 I’m really attracted to a boy in my class, but he’s not Jewish.

I attend a public high school where boys and girls are mixed. There is this guy in one of my classes…when I first met him I only thought he was funny, but now I'm really starting to like him a lot, and feeling very attracted to him. I haven't even talked to him personally but I feel like I'm starting to obsess about him. I see him every day and I just can't stop thinking about him all day long. I would never consider going out with him because he is not Jewish but I can’t get him out of my mind. What can I do to stop this obsession?

Let’s start with the obsession option. If, in fact, you are obsessing over “this guy,” the only way to stop obsessive thoughts is to replace them with something else. You can’t will obsessive thoughts away; that just makes them come back stronger. For example: don’t think about monkeys. Okay – so what are you thinking about right now? Monkeys, of course!

Replace the obsessive thoughts with something else.

Whenever I need to have blood drawn, I have an entire elaborate thought plan I launch in my mind. It starts when the nurse puts on that elastic band and it involves kittens and puppies and meadows and flowers and Bambi and Disneyworld. Yup. I’ve practiced that thought plan so many times in various phlebotomists’ chairs that now, any time I smell rubbing alcohol…Disneyworld! Bambi! Flowers! Meadows! Puppies and kittens. You, too, can train your brain.

But what if “this guy” is not just an obsession? What if you’re really falling for him, and he’s not Jewish? What should you do then?

That question takes me back to high school heartthrob Mark Messner. Mark Messner was “that guy” when I was in high school, back in the 1980’s. He was the guy every girl was always falling for. In my Jewish youth group, we had dances on Saturday nights. And you showed someone that you liked them by asking them to be your date for the dance. Very 1950’s.

Lo and behold, who should ask me, one earth-shatteringly exciting day, to be his date to the Saturday night dance? Mark Messner himself. Breathlessly, I ran to my parents’ room and relayed the uber-exciting news. “Mark Messner asked me to the dance! (Pause for effect…) Mark Messner!”

Now, there is one fact I have neglected to mention to you, my dear readers. Mark Messner was not – and still is not – Jewish. His stepfather was Jewish, hence the Jewish name, hence his entre into the Jewish youth group, and hence the swooning Jewish girls. Because my parents wanted me to marry a Jewish man, I was only permitted to date Jewish boys.

Telling Mark Messner, “Thank you so much, but I decline your lovely invitation,” was one of the hardest things I had ever done. Judging by the intermarriage rate today, I am grateful my parents set the ground rules when I was just starting to date.

If you’re falling for “this guy,” you have to replace not just the thoughts about him with other thoughts; you have to replace him with other things. Find a nice Jewish boy to go out with. Or find some nice girlfriends to hang with. Or start a community service project for yourself; become a big sister, visit a residence for the elderly, volunteer at a soup kitchen…. Bring something else bright and happy and meaningful into your life – otherwise, you might end up bringing “this guy” in instead.

Mark Messner might have been a high-school heartthrob, but he doesn’t hold a candle to Rabbi Dr. Daniel Roth!

Perhaps this is a good place to share with you a quote from Pearl S. Buck. (Do they still have you read The Good Earth in high school? I had my high-school-aged children read it. Great book!) She says, “You cannot make yourself feel something that you do not feel, but you can make yourself do right in spite of your feelings.” This quote goes well with the Jewish philosophical stance that we are given the reward for intending to do a good deed, even if the performance of that deed was thwarted, but we are not punished for a bad deed we intended to do but was derailed.

In other words, your job is: (1) to not go out with “this guy;” (2) to replace him in your life with other things; and (3) to replace obsessions of him with your thought plan. That’s all you have to do. How you feel about him really doesn’t matter. Our hearts are funny things. We can feel attracted to someone we know is not good for us. All the Torah expects of us is to do the right thing, despite our inner thoughts and desires.

Feel attracted to him all you want. Just do right, and don’t act on those feelings. And don’t worry, either: Mark Messner might have been a high-school heartthrob, but he doesn’t hold a candle to Rabbi Dr. Daniel Roth! I promise you there are better fish in the sea than “this guy.”

Q&A for Teens: Nobody Loves Me

Q&A for Teens: I Don’t Measure Up

Listening to My Parents?

Q&A for Teens: I’m Being Bullied

Q&A for Teens: How Can I Change My Friend?
Scientific Curiosity and the Divine Encounter
Mind Over Milkshakes
Love the Convert
Comments
MOST POPULAR IN Current Issues
Our privacy policy
Aish.com Is Looking for Great Writers