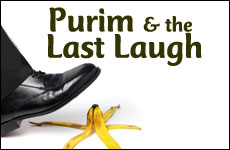 What is the meaning of laughter?

What makes people laugh? Triggers of laughter often transcend words and even intellect; laughter can even cross cultural boundaries. What makes something funny?

I was once so embarrassed by my own laughter that I was forced to address the question. I was spending Shabbat in Jerusalem and my host insisted on joining the Friday night services at a local nursing home for terminal patients to help them out. They regularly had trouble getting together the ten men required to form a minyan and I soon discovered why. An elderly man hobbled up to the front to begin the services. He was weak and connected to an IV line and he did not appear to have much life left in him. Yet he began with gusto, chanting and singing in the most cracked, off-key and horrible yet confident voice I had ever heard. Perhaps he had once been a famous chazzan, cantor, in better years.

With great self-restraint I stopped myself from bursting into laughter. Suddenly, in mid-stanza of song, the elderly chazzan turn to those assembled and said “I’m good, eh?” I guess the rest of the congregation was used to this, but I reached my breaking point. I covered my face and darted out of the room as inconspicuously as I could and at a safe distance, burst into laughter.

All this troubled me. Here was an individual close to the end of his life engaged in a spiritual act and I should have had the utmost respect and reverence for his efforts, however toneless they were. What caused me to laugh?

Perhaps a good place to start is anecdotal evidence from children. The means to get a small child to laugh – even a toddler who can’t even talk – is no secret. Do something silly. Whether making a funny face, placing a shoe on your head, or suddenly changing expressions, children burst into laughter. For adults, it takes the punch line of a joke, perhaps an old fashion sudden slip on a banana peel for those inclined to slapstick, or the horrible chazzan’s sudden announcement that he was gifted soloist.

Many have theorized about humor and tried to define what makes something funny. Our tradition identifies a common trigger to laughter: the unexpected. A joke is funniest when the punch line is exactly the opposite of what one would expect. Similarly, the more honorable a person appears, the more hilarious it is when his respect is compromised.

Laughter in the Torah

Our rabbis teach that we can learn much about the essential nature of a word by understanding its first appearance in the Torah. We find the first mention of laughter in the context of the birth of our forefather Yitzchak. Upon prophetically hearing that Avraham would have a child at the age of 100, and that Sarah would give birth at the age of 90 after her never having a child and not even having a womb – they both laughed. The expectation of a child at such an advanced age was nothing short of ridiculous – laughable. Moreover, God told them to name the child Yitzchak which means “he will laugh.”

A closer look at Yitzchak himself reveals his connection to laughter. Superficially, there was nothing humorous about Yitzchak. On the contrary, the defining moment of his life brought him within a hairsbreadth of death. God commanded Avraham to sacrifice his beloved son Yitzchak. It was only when Avraham stood there wielding a knife over his son who was bound atop an altar awaiting imminent slaughter when everything changed and God told him to stop . One can only imagine Yitzchak’s thoughts when the blade hovered inches above his neck. The Medrash paints an even bleaker picture and explains that Yitzchak actually died but his soul returned to him after the command from heaven to Avraham not to slaughter.

While that event may not seem funny in the classic sense, it represents the ultimate prompt for laughter. There is no greater reversal, no bigger irony than the prospect of immediate death replaced with life. In this context, Yitzchak’s name is revealing. In addition to the allusion to laughter in Yitzchak’s name, the Zohar, notes that the Hebrew letters that spell Yitzchak also spell “ketz chai,” the living end. Our Sages teach that Yitzchak’s return from either imminent or actual death foreshadows a central Jewish belief: the return to life at the end of time as we know it from a state we call death. That reflects the ultimate sudden reversal, the most extreme change possible, and the greatest possible trigger of laughter.

It follows that the greatest laughter in Judaism comes from being saved by the reversal of death at the time of redemption that we await. With respect to those days, King David proclaims “It is then that our mouths will be filled with laughter, our tongues with song” (Psalms 126:2). At the time of the redemption, God too laughs, and King David similarly prophetically predicts “He who dwells in the heavens will laugh” (Psalms 2:4). That reflects the ultimate laughter, and we know that he who laughs last, laughs best.

Laughter and the Month of Adar

According to Jewish kabbalistic tradition (Sefer Yetzira Chapter 8), the 12 months of the year correspond to other systems of 12. They relate to the 12 tribes, 12 constellations, 12 specific organs in the body, the 12 lines in a cube, and what the kabbalists call “the 12 powers of the soul.” The power of the soul that corresponds to the month of Adar is laughter.

A close look at Purim, the greatest day in Adar, reveals its connection to laughter. The entire Jewish people, every man woman and child, young and old, was sentenced to die on a single day in Adar. The decree was signed by the most powerful monarch in the world, and the specter of death loomed palpably. The gallows built to hang the leader of the Jewish people towered ominously over the Persian Empire’s capital city, the Jewish people fasted and mourned, and there was no foreseeable way out. As a nation, we were bound and placed on the altar of the nations. The knife inched closer and closer to our neck.

Yet suddenly, through prayer, faith and bravery, everything changed in a swift turn of events when Esther denounced Haman and King Achashveirosh reversed his decree. We were saved, the body of the wicked Haman swung from the gallows erected for Mordechai, and we received a license to kill those who had plotted against us. The “dirty Jews” went from being a hated people whose life was virtually worthless to a nation that the gentiles clamored to join (per Esther 8:17).

Adar alludes to the greatest possible laughter, the celebration of life snatched from impending death.

To this day, we celebrate the victory, the date slated for our demise, through laughter and our Sages mandate an upgrade in our rejoicing during the entire month of Adar. Accordingly, Adar alludes to the greatest possible laughter, the celebration of life snatched from impending death. Our Sages reveal that Purim is the only festival that will continue after our redemption (Medrash Mishlei 9). It celebrates life after the prospect of imminent or even actual death.

Herein lies the root of all laughter. We laugh at the unexpected, the wittiest punch line that we least anticipate, and the visual of combination of opposites that least fit together. The instinct to laugh can even be uncontrollable to the point of embarrassment. Yet every burst of laughter is an expression that relates to an essential power of the soul and may just reveal an unconscious yearning for the ultimate reversal when all our troubles melt away, death disappears, and we will welcome the advent of the perfected world we are promised.

Unfortunately, the notion of a call from Persia to kill millions of Jewish men, women and children, young and old on a single day are not relegated to the lines of the Megilla telling the story of Purim. The notion of wiping us off the map remains in the headlines today. Yet we leave our troubles behind as we celebrate on Purim in the month of laughter. We know that when we follow the pattern of reconnecting to our roots as our forefathers did so many years ago, somehow, in ways that may seem impossible and which we can’t anticipate, it is we who will have the last laugh.

PODCAST: The Soul Reason for Drinking on Purim

Queen Esther Finds Her Voice
What Makes Eli Run?
The Tyranny of Materialism
Science Enters the Mysterious Inner World of Consciousness
Comments
MOST POPULAR IN Purim
Our privacy policy