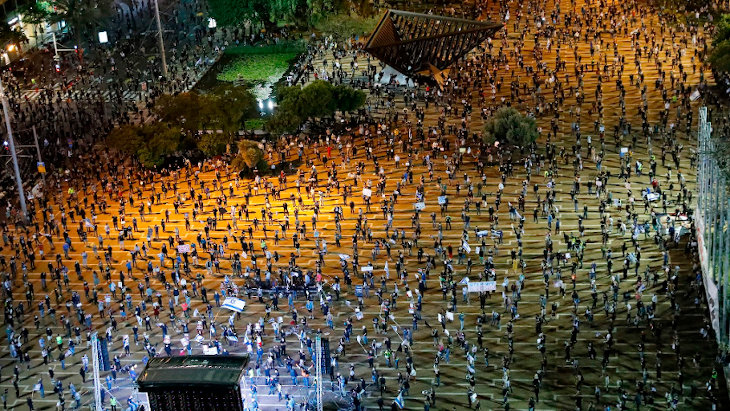 The last people to pull down monuments in Israel were the Romans.

This is not a political article, so don’t get mad if I don’t say what you want me to say. Now that we dealt with that, below are my biased statements about the differences I have seen at both American and Israeli protests. And if I may, I believe that Americans can learn from the Israeli tradition.

They Give out Stickers in Israel

Israeli protesters give out stickers. Because people love stickers. You give them a sticker and they join your cause. I worked a day camp and the kids loved stickers. Why we gave kids stickers that said “Peace in the Middle East” I am not sure. But those kids definitely joined the cause; mainly because the stickers were scratch and sniffs. They smelled like the Middle East.

In America They Give Away Nothing

How do you expect people to come out for your cause when there are no prizes? It’s summertime, try giving out hats. Or if you’re really entrepreneurial try selling them. That’s what we do in Israel because we’re the Start Up Nation.

In Israel, protests are a great time. You get to see friends, hang out, eat some cotton candy. It’s like a carnival. They sing and dance. I actually have no idea what I am protesting for thanks to Coronavirus it’s the only way I can enjoy live music.

I Don’t Understand What the Protest is About

In Israel, I can’t understand a word they’re saying. They yell so fast. In America, I have no idea what they’re talking about either. Mainly because I don’t read the newspaper. Nonetheless, in both countries I like to get involved because I am quite bored.

In America, only campaigning gets big claps. In Israel, we clap at everything they say at protests. They shout better. I clap whenever somebody ends a sentence with a strong intonation. My neighbor is a happy guy with extremely joyous inflections. Every morning, I clap for him too. Americans have to learn to modulate better.

In Israel the Protest Has a Destination

They go to one spot. They know what they’re protesting and they go there. For example, they want more affordable housing so they go to the town in question and protest there. There’s not a lot of marching around aimlessly like they do in America. It’s too hot here.

In America the Protest Moves

In America protests seem more like marches but with no destination. They start at the center of the city and somehow end up in your neighborhood. They get tired and stop. That’s where the protest ends. And then they have to take an uber home. American protests are kind of like a parade, but a little angrier and without the Sponge Bob Square Pants float.

Israelis Know How to Take Over the Streets

Israelis have mastered standing in the middle of the streets. Their goal isn’t to make a point. It’s to stop traffic. That’s how you make a point: “Housing costs must come down or you’re going to be late for work again.”

Lying Down on the Street

Many protesters are homeless in Israel. If the protest comes to them, they figure that they might as well join in and be productive. Often protesters will join them in lying down on the sidewalk. Nothing says commitment to your cause like lying down.

No American would ever lie down in the middle of a street without a cot. Americans just do a sit in. But sitting doesn’t show commitment. If you’re not willing to fall asleep while talking about your cause, you’re not dedicated to it.

Monuments Are Not Pulled Down in Israel

Nobody Protests in the Rain

Israelis are very weather sensitive. I’ve never seen a protest during the winter in Israel. The rain kills the cardboard. Signs are the key to a good protest and nobody here has the kind of money to laminate anything more than letterhead A4.

In Israel we protest during the summer, when the concert can’t get rained out.

Americans Get Deals During Protests

I see Americans running out of stores all happy. They must be finding great sales during the protests. The deals are so good, people aren’t leaving through the doors – they’re jumping through windows.

I just wonder why the stores never give these protest shoppers, bags. It’s a shame that people have to bring duffel bags from their own home to go shopping. That’s just bad service. Finally something we have in common - poor customer service is something we do very well in Israel.

One thing Americans can learn from Israelis is to enjoy the protests a bit more. You all look so angry in America. Whatever you are protesting, you might as well have some fun with it. Try it like we do it in Israel – put a sticker on, clap to the rhythm and enjoy the sunshine.

Jewpid
Why My Iranian Mother Didn’t Want Me to Become a Religious Fanatic
The Jewish History of Prague
Why the Sexual Revolution was Bad for Women
Comments
MOST POPULAR IN Jewlarious
Our privacy policy
Aish.com Is Looking for Great Writers