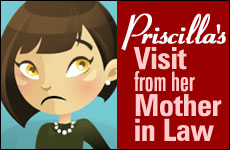 Priscilla’s mother in law came to visit and she tried her very best to resolve things without violence.

You know how I loathe to be the bearer of bad news, but due to the most dreadful of circumstances, I fear I have no choice. The whole ordeal began with Roger who started walking around with a rather pleased expression on his face all the time. This kind of contentment on Roger's part caused my heart to race with trepidation. It's not, heaven forbid, that I don't wish for Roger's happiness, I sincerely do. It's just that the last time he came in looking that happy is when he dropped $130,000 on some sort of ridiculous motorcycle. It was fire-engine red and he looked like an idiot riding it. He said that it made him feel alive, the sensation of the wind in his hair. I didn't have the heart to point out that it's been years since he's had any hair.

When I called Mother to tell her what had transpired, she was in the middle of having her weekly waxing appointment. At the mention of Roger parading around town on a red motorcycle, she became so alarmed that she shot right out of the beautician's chair, inconveniently forgetting that the woman was just about to remove the last wax strip. I am somewhat unclear about what happened next, but Mother showed up at my house twenty minutes later missing half of her left eyebrow.

You know Mother, my darling, and as you can imagine, suffering the loss of part of her eyebrow is similar to what other people experience when they are told that a vital body part must be amputated. So there I had my husband going through a midlife crisis and my mother in a manic state over her eyebrow. Priscilla, I would not wish this kind of turmoil on my worst enemy. Mother was so impossible that by the time she made it onto my upstairs porch screaming "Take me now God, take me now!" I almost considered letting her jump.

Instead I called Mother's psychiatrist, Dr. Brinkley, who promptly came to the house with some meds for her. The cocktail of drugs from Dr. Brinkley put Mother to sleep, so she was no use at all, which left me to contemplate my plan of action alone. There wasn't very much to think about though, for I knew there was only one logical solution. That night, while Roger was asleep, I went to the garage where he had lovingly parked his motorcycle and cut the brakes. Priscilla, I love him too much to see him humiliate himself. It was really the only thing I could do.

Two days later he was riding to the golf course, was unable to stop at a major intersection and ran himself into a pole. The motorcycle was destroyed, and Roger recovered from his concussion after just a few days, thus ending the sordid incident. But this is not about the motorcycle; it is about the expression that preceded it, one that he was now wearing yet again. Something terrible was going to happen.

"My mother is coming to visit!" he exclaimed proudly "I've known for days, but was waiting for the tickets to be confirmed. Isn't that wonderful?"

No, it was not wonderful. Roger’s mother, Phyllis, is one of those people who make you wonder why God couldn't make the world just a little bit larger, so that she could be that much farther away. I break out in hives when I see her name appear on the caller-ID. I fake a contagious illness every single holiday to avoid family gatherings where she might show up. (It's been 27 years straight, you would think she'd catch on, but I guess now we know where Roger gets his brains from.) Fortunately, she is generally too busy going on cruises and traveling the world to torment me with her presence.

"When is she arriving?" I asked, my mind racing already trying to come up with an excuse. "She's on the way from the airport now," Roger squealed. "I wanted to surprise you, but I just can't contain myself any longer!" Dear Lord, the woman would be here in fifteen minutes and even if I overdosed on something, it probably wouldn't even work that fast.

It seemed like only seconds later that I heard her voice in the driveway. "I'm glad you didn't clean up for me" she declared upon entering the house "I wouldn't want you to put yourself out. Besides, I am sure a little dust never did anyone any harm. Although, I must say it is a good thing I'm not asthmatic". It was all I could do not to claw her eyes out. I have two lovely Hungarian housemaids who dust daily and my house is always immaculate. But Roger seemed oblivious and was already showing Phyllis to the guest quarters.

I spent the next week in a state of constant meditation and prayer. I would not, I promised myself, sit in jail for years for murdering that woman. Orange is simply not flattering to my skin tone and I hear the food there is quite distasteful. But it took only minutes of Phyllis's company to cause me to reconsider. She was never at a loss for words. "My dear, it is so nice to see that you aren't bothered by a few extra pounds, but are you certain that your cardigan wouldn't look best in the next size?" It took all my self control not to ask her if she was certain she wouldn't look best on an autopsy table, but I bit my tongue and held it together.

"Roger, you look dashing," she said the next day. "Clearly you and your wife have been using different trainers". I looked to my husband of two decades for a bit of support, but he was still standing there with glazed eyes and that dopey "mommy loves me" expression on his face. When she asked me if I was considering surgery to "mend my bulging waistline", I realized it was time to turn to my only other ally. So I called Mother. "Phyllis is here" I whispered into the receiver. "Oh honey!" Mother exclaimed sympathetically "Why didn't you fake Malaria? You haven't used that one yet."

When I explained to her about Roger and the surprise, she vowed to help me devise a plan to get rid of the nightmare that had birthed my husband. And that is how we came up with Plan B. The next morning, I told Phyllis that I was quite certain that I had eaten something bad the other day and might have a highly contagious form of mad-cows disease. Knowing Phyllis and her fear of illness, I waited expectantly for her to announce her imminent departure.

Later that evening Phyllis approached me. My heart soared with anticipation. She was leaving at last! "My dear" she began "I googled the symptoms of mad-cows disease and when I read of the mood inconsistencies and erratic behavior described there, I'm fairly convinced you have had this illness for quite some time! Whatever the case, I cannot leave Roger with you in this unstable condition, so I am pleased to inform you that I have extended my stay for another month. Isn't that wonderful?"

Bake me some cookies Priscilla and bring them when you visit me in Prison. Blame it on the mad-cow disease if you will, but I am going to kill her.

All my love,
Vivian

Yes, I Wrote for Seinfeld
The Connection between Israel and the Jewish People
Grit and Torah
Why We Can’t See True Reality
Comments
MOST POPULAR IN Funny Stuff
Our privacy policy