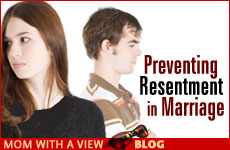 Six strategies on how to deal with the common frustrations in marriage.

We have a commandment not to bear a grudge. While the sentiment is certainly nice, the practice is somewhat more difficult (if it were easy, we probably wouldn’t need to be commanded!). And, contrary to popular belief, the Talmud actually suggests that men are more forgiving, that they embody the trait of rachamim – compassion, while women embody judgment. This does seem to be borne out in the grudge-bearing department. Men may frequently fight – physically or verbally – quite intensely. But they seem to quickly move on. Women’s physical expression of animosity is usually more toned down although their verbal skills can be quite acute. But we hold on to the hurt and resentment – for a very long time.

In addition to the Torah prohibition, there are some obvious practical and emotional reasons why this is an unproductive pastime. It damages every relationship it touches and it eats away at us internally, damaging our souls.

No where is this more true or more destructive than in a marriage. Bearing a grudge against one’s spouse can destroy the core of the marital union. We have to work very hard not to fall into this trap.

Since it is so difficult, I have a compiled a list of strategies:

1. Decide what’s worth getting hurt over. Don’t nitpick or focus on the small details.

Most mornings, my husband rises before me, makes coffee for both of us and goes to sit and learn at the dining room table. Most morning he also leaves his coffee cup sitting on same table. And most mornings it irritates me every time I see it. How far is it to the kitchen? Wasn’t he walking in that direction anyway? Am I his slave? The hostile inner dialogue begins to build.

But wait; I stop myself. Didn’t he make me the coffee? Isn’t he engaged in an activity I support? And, most importantly, isn’t it such a small thing in the grand scheme? Shouldn’t I just ignore it altogether and move forward? The answer is a resounding yes.

2. Don’t turn obviousness or gender differences or unique personality traits into a deliberate hurt. If your husband forgets to pick something up on his way home, it is almost always not because he never listens to you or because you say isn’t valuable to him (I know what you’re telling yourself!). More than likely, he’s distracted by stress or absent-minded or a big picture person and not detail-oriented. Write him a list. Call to remind him. Do some it yourself. But don’t take it personally or as a commentary on the relationship.

My friend once lamented to me her husband’s inability to remember the names of any of her children’s friends. I could see where she was going with this. “He doesn’t really care, he’s not interested in our lives; he’s hurting them.” But I wasn’t buying. Because I know her husband. He’s thoughtful and kind and very involved with his family. He’s just a got a bad memory for names. He might benefit from a Dale Carnegie course but it shouldn’t be a source of pain – or fuel for a grudge.

3. Allow him (or her!) to accumulate some credit in the bank that he can “withdraw” when he makes a mistake. Let’s say he didn’t call you from work today. If he has called every day for the last 10 years and doesn’t today, you should maybe be concerned about him but not resentful or angry. He has demonstrated his caring and attentiveness consistently. We need to make judgments based on the rules, not the anomalies. This works well not just in our marriages but also in terms of our relationship with the Almighty. He does so much good for us yet we tend to react badly when something doesn’t go well instead of allowing Him also some “credit” in the bank!

4. Practice letting go. These little frustrations – they don’t exist. They’re not important enough for our notice. Let them go. Do NOT keep a list. Stay in forward motion.

5. Stop negative thoughts in their tracks. Remember that the goal is the success of the marriage. Ideas like “getting even” have no place here (or anywhere else for that matter!) Plotting to “talk to him the way he talks to me” or to “stop cooking and see how he likes that!” is actually worse than bearing a grudge. It’s taking revenge! It should go without saying that this is not how we build relationships. But since it is, unfortunately, easy to fall into this pattern, we need to nip these thoughts in the bud.

6. Focus on the larger picture. You are building a life, a future, a marriage. There will be clashes and struggles and irritations along the way. It’s inevitable. It’s life. It happens in every home and every marriage. Successful marriages are not those without disagreements or frustrations. They are the ones where the partners know how to let go and move on, where they concentrate on the good of each other and the marriage. We say that in getting married a couple becomes one. You wouldn’t bear a grudge against yourself!

Keep the positive in the forefront, get the negative off even the back-burner and always, always, always ask the Almighty for help.

Your Child Got Divorced?!

Up, Up and Away
In the Shadow of David and Goliath
Where Do the Laws of Nature Come From?
Saadiah Gaon, Rashi and Maimonides: How Three Rabbis Revolutionized Judaism
Comments