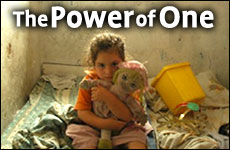 How many lives can one man change?

They had stood in line for over two hours. The tiny street swarmed with shoppers rushing to purchase their last Passover needs. Waiting to receive three or four kilos of free carrots and potatoes along with the rest of the neighborhood poor, small Ariel and his father inched forward. To Ariel's eyes, the end of the line looked miles away. That wasn't what bothered him, though.

"What gives the poor man the strength to cope is his spirit."

"What gives the poor man the strength to cope," says Ariel Lurie, "is his spirit. If the spirit is guarded, he can go on to be anything – a pilot, a contractor, a member of the Knesset, the Prime Minister..."

As a child, Ariel's family's financial situation did not affect his sense of self-worth – until that day standing in line. With so many people watching him, for the first time Ariel Lurie felt the shame of poverty. "I took it upon myself that when I grew up I would create a way to enable people to give to the poor and hungry without shaming them," says Ariel. "Their spirit would be defended." 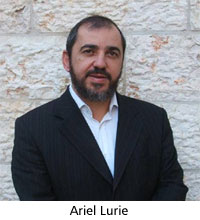 Shabbat was the only day during the week when Ariel and his brothers and sister could look forward to a warm meal. Unable to afford meat, his mother would bring home bones from the butcher and boil them with grains and vegetables to make a simple chamin, a Sephardic version of chulent. As the chamin cooked, the fat in the bones would rise to the top of the pot. Whoever received the first servings would enjoy most of the delicious, nourishing fat floating on the savory water. Every child in the Lurie family wanted those servings. But every week after Ezra Lurie made Kiddush and hamotzei, one of the Lurie children was elected to bring the very first, fatty bowls of Mrs. Lurie's chamin over to neighbors who were even hungrier than themselves. "I remember walking over the cobblestones of our courtyard in the Bucharian Quarter of Jerusalem trying not to spill the bowl of chamin, just smelling it."

Yad Ezra VeShulamit distributes roughly 40 tons of food to the needy on a weekly basis.

Today, 30 years later, Ariel Lurie serves as the founder and director of Yad Ezra VeShulamit, a relief organization that distributes roughly 40 tons of food to the needy on a weekly basis. On a Thursday afternoon visit to the main headquarters of Yad Ezra VeShulamit, volunteers can be seen busily packing carrots, potatoes, onions, canned goods, bread, and other groceries from industrial crates into hundreds of individual baskets spanning the length of Shimon Rokach Street in Jerusalem's Beis Yisroel neighborhood.

Ariel, whose grandfather and great-uncle had imported and smuggled food into Jerusalem from Burma Road during the siege of 1948, confesses, "The power to help others is born of feeling their pain. I made a promise to myself. I told myself that when I grew up, I would take care of hungry children."

Recently, when Yad Ezra VeShulamit lacked sufficient funding to begin an after-school multi-service center providing hot meals, counseling, school supplies, and help with homework to children suffering the brunt of their family's poverty, Ariel moved himself, his wife, and their entire family into a small, rented apartment so that their own home could be used to host the children's multi-service center. "How can I live in my home when children are going hungry?" he asks. Ariel's promise is still going strong.

Ariel began his legacy of kindness as a school child. When his mother was able to pack him a sandwich for lunch, children without sandwiches received half of what was almost all the food Ariel would have for the entire day. Later, when Ariel began making pocket money doing neighborhood odd-jobs in high school, most of the money went to his family, his friends, and needy neighbors. By the time Ariel had graduated high school and had begun earning a salary as a chef's assistant in one of Jerusalem's hotels, his reputation for generosity had poor families from all over Jerusalem calling him for help. 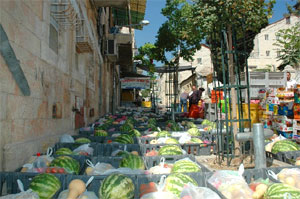 When the number of people Ariel was caring for grew too large to handle alone, Yad Ezra VeShulamit was founded with two employees, a truck, and a driver. The truck was used to pick up produce and factory surplus that farmers and managers were otherwise going to discard. Today, Yad Ezra VeShulamit distributes food, clothing, basic household supplies, and more from over twenty branches and soup kitchens throughout Israel.

Ariel has maintained an independent source of income both before and since Yad Ezra VeShulamit was founded. The organization is completely non-profit. "I'm not a country, I'm not the Prime Minister, and I'm not the minister of finances. I wasn't thinking 40 tons of food! I thought I'd help just one family... and it grew." Today, Yad Ezra VeShulamit distributes 2,500 food baskets each week and runs soup kitchens in Jerusalem, Sfat, Eilat and Sderot where hundreds of people eat everyday.

Like other people think of making money, Ariel is constantly thinking of ways to feed hungry children 24/7. He came up with the concept of a Children's Center where a child can come for a hot meal, help with homework, an afternoon activity, dental and medical care and a lot of warmth and love. "Even if we manage to help a handful of children break the cycle of poverty from the hundreds who come to us, it's worth it".

"Growing up poor isn't so bad," Ariel continues quietly. "The problems begin the moment poverty damages a child's level of education, damages his self-respect...the path from that place to the street is very short. To stop the cycle of poverty, we have to make sure people's spirits aren't broken. The spirit is the primary value of the Jewish People. That's what kept us on the map throughout 2,000 years of exile."

To learn more about Yad Ezra VeShulamit and contribute to the battle against poverty, please visit www.yadezra.net or call 972-2-585-6002.

Braha Bender serves as a branding, public relations, and media strategist with Mishpacha Magazine, as well as providing boutique personal and business coaching services to highly motivated clients. She lives in Jerusalem with her family.

Not In Kansas Anymore

We Are All Sderot
Blessing on Chewing Gum
Was Rahab a Prostitute?
Extras In Our Own Epic
Comments
MOST POPULAR IN Israel
Our privacy policy