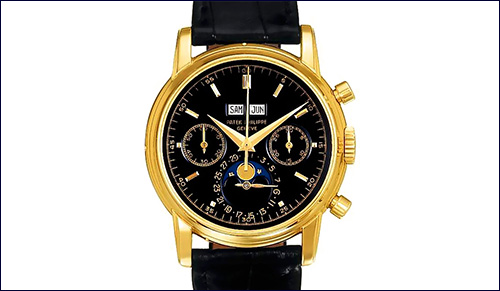 No matter how hard we try to possess it, time possesses us.

I recently came across a fascinating magazine called “Chronos,” devoted exclusively to luxury timepieces and to the international auctions where they can be purchased.

What aroused my curiosity was the unique manner in which they were housed and encased. The $461,000 item was a Patek Philippe with “an exceptional platinum automatic minute-repeating calendar with retrograde date and moon phases.” If that is a bit much for your pocketbook, there is a different one that can be yours for a mere $8,750, made of “white gold with a 15-jewel proprietary curved movement.” If you don’t understand why a platinum minute-repeating calendar watch with moon phases should go for half a million dollars, or don’t appreciate the significance of a proprietary curved movement, you clearly do not belong among the readership of Chronos magazine. (I couldn’t help thinking that all this gives new meaning to the expression “time is money.”)

One might expect that for $461,000, the watch would at least offer more time, a temporal bigger bang for the buck: say, 65 minutes per hour instead of the commonplace 60. For such a bundle of money, one should get a decent return on his investment. Five extra minutes an hour means an extra 120 minutes per day, which would be an extra 14 hours per week, which would translate to an extra 56 hours per month. Not a bad return.

Naturally, the timepiece scoffs at such mad hallucinations. Despite what one paid, it moves inexorably forward, its bejeweled little wheels refusing to slow down for a mini-instant as it tolls the identical seconds and minutes as the $4.95 Mickey Mouse watch one picks up at the corner drugstore. Time will not be bought off.

Man and time have been involved in a complex love/hate relationship ever since Creation. Man is a captive of time, limited and controlled by an unrelenting taskmaster. To be sure, time can also be a beneficent healer, curing old wounds and covering up physical and emotional scars. Without its help, unhappy events would never fade away, grief would be unending. The passage of time regenerates us, pulls us up from the depths of despair and allows us to function again as normal human beings.

But man is all too aware of the dual nature of his master. He knows that in time, the helpless, newborn baby becomes a mighty Olympic athlete; he also knows that in time the Olympic athlete becomes a frail and helpless old man. Time can be a friend, but more often than not it is far from friendly, transforming smooth skin into wrinkles, straight backs into bent ones, vivid memories into fogs of haziness

Unable to arrest its relentless forward march, man confronts it — by squandering time, by killing time. Failing at this, he tries to pacify it by placing it in his pocket, on the walls of his home and his buildings, on his wrists, as a pendant on his clothing. Failing at this as well, he tries to indulge it by housing it in luxurious encasements, transforming it into a thing of aesthetic beauty. In an effort to make it even more attractive, he refers to his timepiece as a chronograph, enhancing it with various colored surfaces, date displays, appointment reminders, perpetual calendars, moon phases and planet tracings.

But beneath all the glitter, no matter how lavishly clothed or luxuriously adorned, it continues to move ever forward. Even were we to pay millions of dollars for a timepiece, we would never be able to possess it. It will always possess us.

Mindful of all this, the thoughtful man begins to suspect that perhaps time gets its eternal power from the fact that it is part of Creation, and that it originates with the Timeless One. As such, it can neither be propitiated nor bargained with. Instead, man wisely chooses to make time meaningful and perhaps even sacred. He learns to achieve this not only on holy days, but even on ordinary days and ordinary hours, which can be made meaningful by deeds of loving-kindness, by attentiveness to the needs of others, by introspection and sensitivity, by considering one’s role and place in the great scheme of the universe. Acts such as these help him transcend time and put him in touch with eternity.

This can be achieved either with a million dollar chronograph or a simple $4.95 wristwatch. Neither of them will budge from the 60-minute hour, but they each offer the same opportunities within those 60 minutes. In fact, don’t tell Chronos magazine, but those 60 minutes can be made meaningful without any timepiece at all.

Juggling the Five Balls of Life

Believe There's Always a Way Out
Faith: the Axis Upon Which the Wheel of Science Turns
Love - Not Just About Chemicals Anymore!
Is There a Moral Code in a Virtual World?
Comments