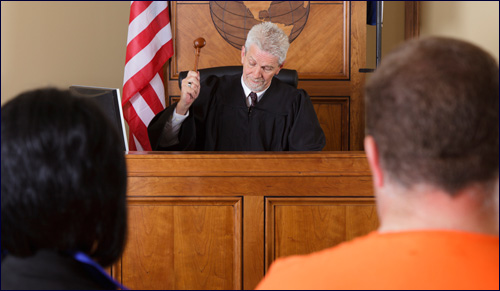 It’s surprising how many innocent people confess to crimes they didn’t commit. This can’t happen in Jewish law.

Shortly before midnight on Monday, September 21, 2000 three masked man broke into the home of Walter Bowman. The men wore gloves and had their faces covered with bandannas. Walter Bowman heard a lot of noise outside of his room, opened the door and saw the robbers. He quickly shut the door.

One of the intruders fired his gun at the bedroom door and kicked it open. “I shot him, I shot him!” he cried. The men fled the house and Walter Bowman died before he could get to a hospital.

A crime-stoppers tip led the police to investigate three men, Robert Rutherford, Bradford Summey, and Lacy “J.J.” Pickens, but the police determined that Pickens couldn’t have committed the crime because he was already in police custody at the time of the murder. So they dropped their investigation into all three men.

The police investigated other tips and eventually arrested Robert Wilcoxson and five other men. Facing the threat of the death penalty if convicted, Wilcoxson pled guilty and was sentenced to 15 years and 9 months in prison.

What the police didn’t realize was that Lacy Pickens was confined on weekends, but free on work release during the week. In 2003 Robert Rutherford admitted that he, Summey and Pickens committed the crimes. Four years later DNA evidence matched Summey’s bandanna and investigators realized that the getaway car – a 1971 Oldsmobile Cutlass Supreme – was the same one that Pickens had owned at the time.

In 2011, after serving nine years in prison, Robert Wilcoxson was finally found innocent.

Confessing to a Crime He Didn’t Commit

The Economist (“A deal you can’t refuse,” Nov, 2017) notes that the use of plea-bargaining, the practice of having suspects confess to a crime in exchange for a reduced sentence, is rising in justice systems all over the world. In 1990 a study of 90 countries found that 19 used plea-bargains; today 66 countries do. In America it is used all the time. Fewer than 3% of federal defendants stand trial; most take plea-bargains.

Plea-bargaining became popular during the Prohibition era when there was such a steep increase in the number of criminal offenses that the courts didn’t have the manpower to bring them all to trial. Plea-bargaining is supposed to persuade guilty people to confess; it’s not supposed to create false confessions. Why would an innocent person plead guilty? Why did Robert Wilcoxson confess to a crime he didn’t commit?

According to Jewish law, an accused person is not allowed to testify against himself. If America courts followed the Torah’s laws, a suspect’s confession, “I killed him,” could not be used against him. Nor could they threaten him with the death penalty or promise him a short jail sentence in return for a confession.

Maimonides (12th century) suggested a reason behind this Torah law. A person accused of a crime is in a very vulnerable state – they may become depressed, even suicidal, and admit to a crime just to get it all over with (Mishnah Torah, Sanhedrin 18:6) . And Rabbi Yosef Ibn Migash (11-12th centuries) wrote that if confessions were admissible as evidence, the courts would be overly influenced by it and not pay attention to other important evidence that might prove his innocence (Menachem Elon (ed.), The Principles of Jewish Law (1975), at 614).

Today, modern psychologists are demonstrating what these Rabbis from the middle-ages knew all along. In 2013, Lucian Dervan, a law professor at the Belmont University College of Law, and Vanessa Edkins, a psychologist at the Florida Institute of Technology, created an experiment to see if guilty people were more likely to confess than innocent ones. They asked students to solve logic problems, first in a team, and then on their own. When they were supposed to be working alone they had researchers ask half of them for help, which was technically “cheating.” Afterwards, all the students were accused of cheating and offered a plea-bargain to avoid punishments, such as losing payment for participation or having their supervisors notified. Nearly 90% of the “cheaters” confessed, but so did most of those who were innocent.

Will the American Justice system take a page from Jewish law and get rid of the plea-bargain? It’s not as crazy as it sounds. In 1966, the Supreme Court ruled that all criminal suspects have to be instructed that they have the right to remain silent and that anything they say can and will be used against them in a court of law. In explaining his agreement with the ruling, Chief Justice Warren observed that the “roots” [of the privilege against self-incrimination] go back to ancient times,” and in the footnote he quotes Maimonides that, “the admission that no man is to be declared guilty on his own admission is a divine decree.”

There are many other ways that Jewish law could help reform the criminal justice system as well, such as:

Perhaps the biggest lesson that the American justice system can learn from the Torah is that every person is created in the image of God. The courts systems are busy and over-worked, and it’s easy to see a criminal suspect as just another cog in the machine. But we must remember that no matter how far a person has fallen they still have a divine soul. As the Torah commands, “You shall not pervert judgment… nor take a bribe; for a bribe blinds the eyes of the wise, and perverts the words of the righteous. Justice, justice shall you pursue” (Deut. 16:18-20).

Lori Holzman has a BA in English and a MS in Information and Library Science from Queens College. She works at an Educational Publishing Company in New York. She has published articles in Listen Magazine, The Jewish Studies Journal and the Knight News. She is also the author of the best-selling picture book Chaim Ephraim and the Shabbos Guests.

Jews, Genetics and the New World

The College Admissions Scandal
Why My Iranian Mother Didn’t Want Me to Become a Religious Fanatic
The Jewish History of Prague
Why the Sexual Revolution was Bad for Women
Comments
MOST POPULAR IN Current Issues
Our privacy policy
Aish.com Is Looking for Great Writers