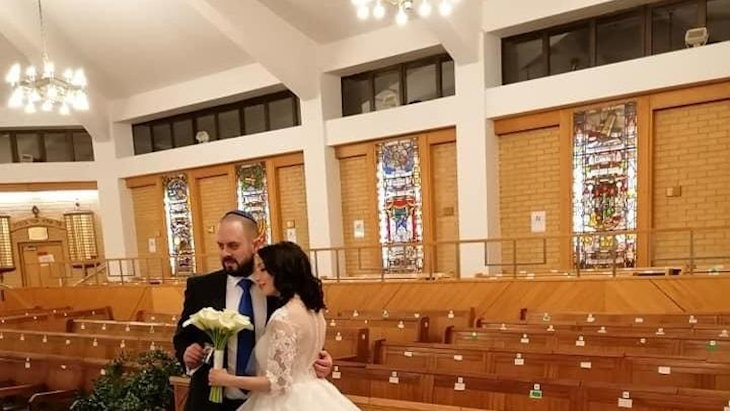 Hours before Tier 4 restrictions went into effect in London, Rabbi Alex Chapper and a cadre of people sprung into action.

On December 20, Britain announced it was placing much of the country into a new Tier 4 lockdown, aimed at preventing the spread of a new, potentially more contagious variant of Covid-19. The severe new restrictions were due to come into effect later that night.

Rabbi Alex Chapper of Borehamwood & Elstree Synagogue in suburban London learned the news that evening, at the close of Shabbat. “Motzei Shabbos (Saturday evening) I got home from shul and had messages on my phone. I wasn’t even aware there’d been a change in the guidelines,” he recalled in an Aish.com interview. His first thought was about the wedding that was due to take place the following day in the synagogue. 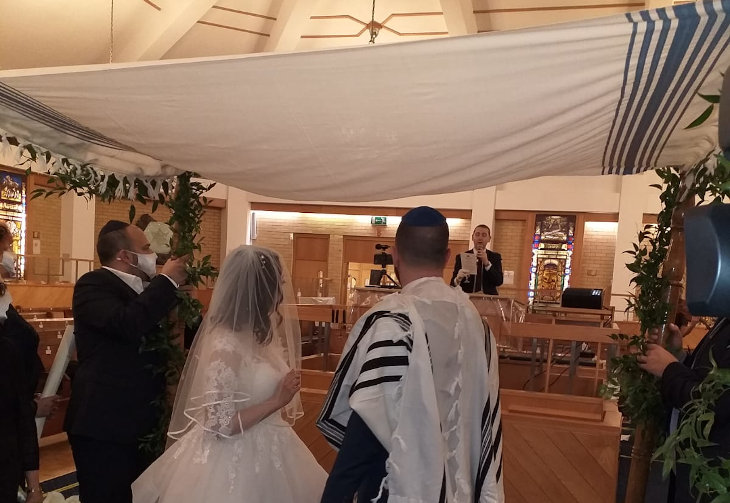 London was already under strict restrictions limiting movement and gatherings. The couple, Debbie Waterman and James Buckman, who were planning to get married the following day, had already prepared for a very small ceremony and celebration, capped at just fifteen people, in accordance with Covid guidelines. Now, even this modest wedding would be impossible: Tier 4 restrictions meant that no more than six people could gather together in one place.

This posed a real problem, Rabbi Chapper explained. Jewish weddings typically require a minyan of ten men present; under Tier 4, a traditional Jewish wedding would have been impossible. Faced with the prospect of delaying their wedding possibly for many weeks, Debbie and James decided to press ahead. On Saturday night, they phoned Rabbi Chapper and asked if they could move up their wedding to that night. Rabbi Chapper’s answer was a resounding yes. “We organized it in two hours, as soon as we finished speaking.”

Debbie's mother and a friend quickly drove over with her wedding dress. James' hairdresser friend did the bride’s hair, and Debbie did her own makeup. Four friends of the groom held up a large tallit creating a makeshift chuppah. Another friend headed to the synagogue with his keyboard to provide musical accompaniment. While the couple prepared, Rabbi Chapper wrote the couple’s ketubah, wedding contract, with the new date.

By 9:30 PM, everything was in place. The scenario reminded Rabbi Chapper of the Cinderella story. “By the time we started the chuppah it was almost ten o’clock. I said we have two hours to get this done – we have to be out by midnight.”

Instead of feeling hastily arranged or small, the wedding was beautiful. “It was very intimate – the bride said it was very magical.”

For Rabbi Chapper, the small wedding was a magnificent example of what’s truly important in a marriage. “It’s the commitment to get married, despite the odds – that was the most important thing for them. It wasn’t a big party of having lots of guests. It wasn’t the trappings of a large celebration – the couple focused on what really counts: each other."

Rabbi Chapper and his wife Rebbetzin Eva Chapper study with couples who are planning to get married at Borehamwood & Elstree Synagogue before their weddings. “When my wife and I lean with the bride and groom we say this is the beginning of your life together… Until now your focus was getting married, details about the wedding day. What’s really important is what comes next: how to maintain that freshness and excitement the rest of your life, please God.”

“People are seeing in lots of ways that what we thought was important isn’t so crucial," Rabbi Chapper observes. "Amid the pandemic we’re realizing what are the most important things in life, such as our health and our connections with our friends and loved ones. Hopefully we'll hold on to that realization.”

Infusing Passion in Your Judaism